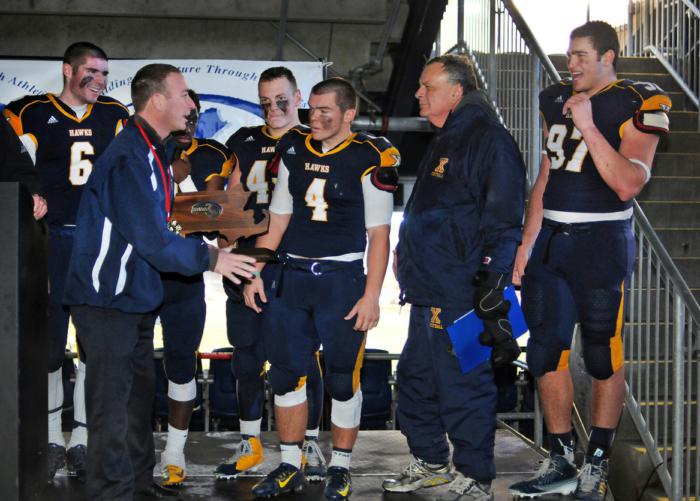 Both teams defied the storm on Thanksgiving eve at the Manning Bowl in Lynn and the St. Mary Spartans had a great game, shutting out their neighboring rival 44-0. Two seniors on their game were Conor Sakowich and Abraham Toe, scoring enough touchdowns before halftime. Neither team scored in the third and fourth. St. Mary, led by Matt Durgin (7th season), ends at 7-4. Lynn Tech ends at 3-8.

Traveling over to Viola Stadium in Dorchester, the CM Knights clashed with Boston College High for the 53rd time in their rivalry. With both teams even at 5-5, a winning record was at stake and BC High prevailed with a 27-14 win. The Eagles got off to a great start in the first quarter with three touchdowns putting up 21 points on the board. The Knights battled back in the second, scoring two touchdowns. With BC High leading 21-14 at the half, neither team scored in the 3rd. In the fourth, the Eagles sealed the win with a final touchdown. For BC High, it's a 10-year Thanksgiving Day winning streak and 6-5 season. Ron Bartlett returned as head coach after being away two seasons. Catholic Memorial, led by Alex Campea (11th season) ends at 5-6.

In year two of this rivalry, the Fenwick Crusaders travelled over to Pingree in South Hamilton and won the game 28-0. All eyes were on senior Rufus Rushins and he rose to the occasion, rushing for 196 yards and scoring two touchdowns. He finishes his high school career with 5, 764 rushing yards, breaking the school record of 5,601 set by Bobby Tarr (2004-2007) and finishing 5th in state history. Fenwick had hopes of repeating as Div. 5 super bowl champions but lost a state semi-playoff game to Abington on Nov. 22. Previously, Fenwick repeated as Div.5/north champion, defeating Whittier on Nov. 14. Fenwick, led by Dave Woods, end at 11-1. Pingree, led by Chris Powers, ends at 4-5.

Playing in Andover, (and for the third time this season) the Central Catholic Raiders capped a great season with a 41-21 win over their rival. Two Raiders having a great time were Michael Balsamo, rushing for two touchdowns and a kick-off return that led to a score and senior quarterback Mike Milano who threw for 230 yards and three touchdowns. Central captured the Merrimac Valley Title on Oct. 24. These two teams played on September 26 and in a play-off game on October 31 and Central won both. Central Catholic had hopes of repeating as Div. 1 super bowl champs but lost to St. John Prep in a play-off game. Led by Chuck Adamopoulos (18th season), Central ends at 9-2. Andover ends at 6-5.

Playing at Saunders Stadium in South Boston, the Cathedral Panthers capped a great season with a 14-0 win over Marian. Cathedral won the Div. 6/north title on November 15 with a win over Mystic Valley. A disappointing loss to Cohasset on November 22 (state semi-final game) ended their chance to contend for the Division 6 super bowl on December 6. Led by first year coach, Rick Anderson, Cathedral ends at 10-2. Marian, led by first year coach Richard Gunnell, had a winning season too, ending at 6-5.

Playing in Waltham, the visiting Malden Catholic Lancers had a happy Thanksgiving, departing with a 13-10 win over their rival, the Waltham High Hawks. Trailing 10-6 as the fourth quarter began, Kellan Fields rushed for 135 yards. 0-10 last year, Malden Catholic got its first win of the season on September 12, defeating Silver Lake Regional in overtime 20-14. A six game losing streak was followed by a two game winning streak as Thanksgiving Day arrived. Malden Catholic, led by Jeffrey Smith (3rd season), ends at 4-7. Waltham High ends at 4-7.

Just like last year, the outcome of this game would decide the Catholic Conference Title and the Xaverian Hawks, playing at their home field in Westwood on Thanksgiving morning, triumphed with a 34-13 win over their rival, the visiting Eagles from St. John Prep in Danvers. Neither team scored in the first, but Xaverian dominated thereafter. Two Hawks having a great game were Noah Sorrento, scoring four touchdowns and quarterback Jake Farrell making the right moves. Despite the loss, St. John Prep, led by first year coach Brian St. Pierre, had a great season, ending at 8-3. A tough loss to Everett on November 14 for the Division 1/north title ended their chance to contend for the Division 1 super bowl at Gillette. Xaverian ended their season with a Div. 1 super bowl win on Saturday, December 6, defeating Everett 38-29. With Charlie Stevenson at the helm (22nd season), the Hawks end at 12-0.

Postponed to the day after Thanksgiving, instead of playing at home on the eve, Spellman defeated their rival 28-14. Tied at 14 at the half, Spellman got the job done with a stellar performance from Mike Anastasi, scoring on a 60 yard punt return and quarterback Mike Reale scoring too in the third quarter. Spellman, led by Ron St. George (7th season), ends at 6-4. Archbishop Williams, led by Bill Kinsherf (19th season), ends at 4-7.