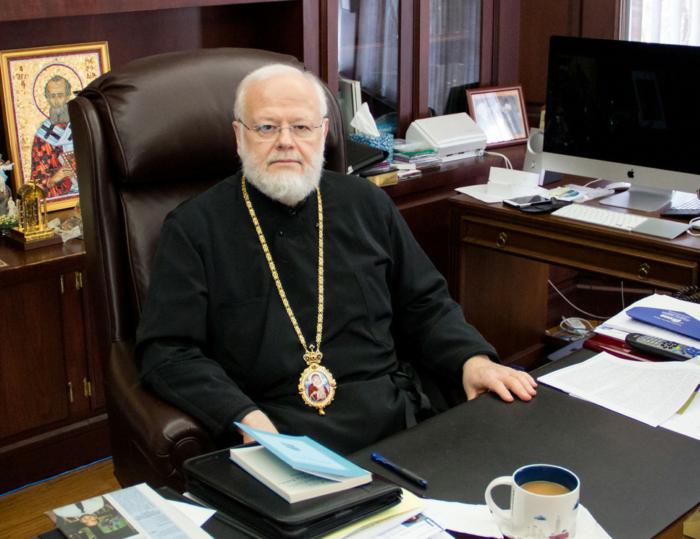 BROOKLINE -- Metropolitan Methodios, leader of the Greek Orthodox Metropolis of Boston, recently returned from a trip to Istanbul, Turkey where he witnessed first-hand a historic meeting between Pope Francis and Orthodox Ecumenical Patriarch Bartholomew of Constantinople.

Metropolitan Methodios spoke with The Pilot Dec. 5 about his experience of this important ecumenical moment.

"Catholicism and Orthodoxy are blessed, in our days, with two leaders that are visionary, that care about the voice of the Church. In a world that is fragmented by division, hatred, and war, here are two men that are leading their churches by example, and I hope God gives them both many years to live to continue leading us to what is God's will," the metropolitan said.

"It was a blessing for me. This was the second time I have served on the Orthodox synod in Constantinople, and both times I happened to be there when a pope visited," said Metropolitan Methodios.

In a tradition established after the Second Vatican Council, the pope and the patriarch normally send delegations to their counterpart each year for the celebrations of the mutual feast days of their patron saints -- the Catholic patronal feast of Sts. Peter and Paul on June 29 and the Orthodox patronal feast of St. Andrew on Nov. 30. This year, Pope Francis traveled to Turkey personally.

"His humility and his kindness just emanate from this man's presence. He just has a beautiful smile. He is humble," Metropolitan Methodios said.

"They made it clear in both their elocutions, and in the joint statement, that they are going to urge an international theological dialogue between Orthodox and Catholic theologians. They are urging them to continue striving for theological unity," Metropolitan Methodios said.

Metropolitan Methodios noted that while meetings and collegiality between a pope and a patriarch connote improved relations between the two Churches, they do not by themselves recreate the unity the Church had in the first thousand years before the Great Schism.

"We would love to be able to commune together, to come to the table of the Lord and share the sacrament, but we cannot do that unless we have worked out the various issues that still exist," he said.

To restore the unity that existed, he said, work must be done at lower levels in and between the Catholic and Orthodox communities.

"Before you get to the top floor, you have to take the elevator up, stop along the way, and have your embrace open to the theology of both sides, work together, study the documents, go back to the seven ecumenical councils, and how the Fathers of the Church from all over the world were able to come together and place the foundations of Christian beliefs. That has to be done again, now, and I think it is," he said.

He said the work of unifying the Church should continue, and the example set by the pope and patriarch should be reflected by the clergy in the churches. However, he noted that the ecumenical patriarch does not have the same unilateral power as the pope.

"He does not have the same authority as the pope of Rome in the Catholic Church. The ecumenical patriarch is the first among equals. He is the patriarch of 'New Rome,' which is Constantinople, and he convenes the Holy Synod, which is comprised of the other patriarchs and leaders of the autocephalous Orthodox Churches, but decisions are made collegially. The patriarch of Constantinople cannot intervene in the affairs of the Church of Alexandria, or Antioch, or Russia for that matter," Metropolitan Methodios said.

Metropolitan Methodios has worked alongside Cardinal Seán P. O'Malley for years on matters of Catholic and Orthodox unity in matters of faith and sometimes in the public square.

The two men also jointly led a group of Boston Catholics and Orthodox to Rome and Constantinople on pilgrimage in 2007; in 2012 the metropolitan joined Cardinal O'Malley in an interreligious coalition against a push to legalize physician assisted suicide.

Metropolitan Methodios said the mutual respect demonstrated by the two leaders should be reflected throughout Catholicism and Orthodoxy. He particularly referenced the humility demonstrated in a widely publicized photo of Pope Francis receiving a blessing from Ecumenical Patriarch Bartholomew.

"I think that Bartholomew respects and loves Francis like a brother. It's something that should be replicated by all of us on the local level, between myself and Cardinal O'Malley, between bishops in Detroit, and California, in Los Angeles, and all over the world. If we showed that humility and that leadership, I think our people would follow," he said.