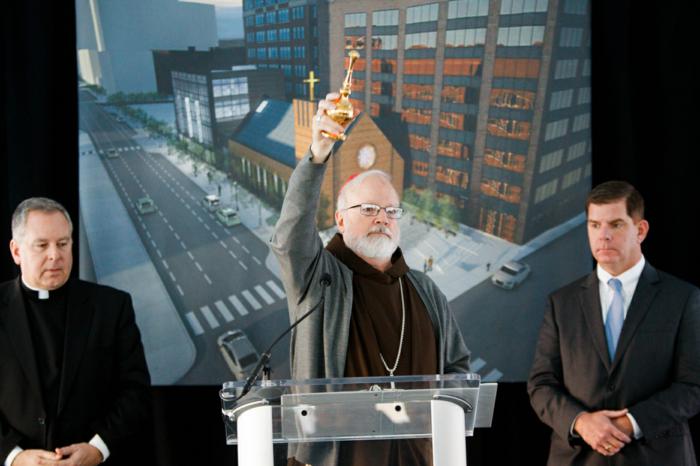 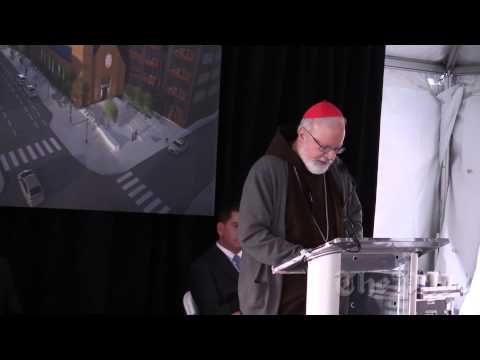 SOUTH BOSTON -- South Boston parishioners, developers, politicians and representatives of the archdiocese came together Nov. 21 to break ground for the new Our Lady of Good Voyage Chapel at 51 Seaport Boulevard in South Boston.

Completion of the chapel, part of the 23-acre Seaport Square project, will mark the first Catholic worship site to be built in the city of Boston in more than 50 years.

Many of those who spoke at the groundbreaking said they expect the chapel would open by Christmas of 2015. The current Our Lady of Good Voyage chapel on Northern Avenue, with history in Boston for over half a century, will remain open until the new chapel is complete.

Speaking at the groundbreaking, Boston mayor Martin J. Walsh thanked Father Joe White, the pastor of St. Vincent de Paul Parish in South Boston, which is responsible for the chapel, for the role he played locally as the project went forward. He also thanked the archdiocese, the developers, and others gathered at the groundbreaking ceremony.

The project constitutes the largest planned-development area in the history of the city Walsh said. The project will include residential space amongst the business and retail development, as the area continues the growth that prompted the relocation of the chapel.

"It's been amazing to see how this congregation has changed and expanded over the years. While still maintaining a strong working-class base, they have grown into including young professionals, attorneys, and other people who work in the area. This mix reflects the dynamic character of the Seaport Area," Walsh said.

John Hynes, managing partner at Boston Global Investors, which is working with Morgan Stanley on the project, said Cardinal Seán P. O'Malley gave unwavering support for the idea of replacing the chapel as part of the area's development plan.

"I completely respect and admire the cardinal's foresight on how valuable this venture could become for the archdiocese, and in particular, for his immediate grasp, and how quickly he saw that this part of South Boston was poised for growth, and for his commitment to ensure that the Church continues to be an integral part, and a meaningful part, of the city's fabric in this particular area," Hynes said.

Hynes said he felt a sense of pride in helping to bring about the construction of the new church because his grandfather, John B. Hynes, who served as mayor from 1950 until 1960 and presided over the opening of the original chapel.

"It's not often, if ever, in my recollection that a developer has been charged with the opportunity and the task of building a new church, certainly not here, and yet here we are today and we're doing just that," he said.

The Our Lady of Good Voyage Chapel was designed by ADD Inc. and Stantec. The new 5,000 square-foot structure, capped by a steeple outside and including a choir loft, will stand at the intersection of Seaport Boulevard and Sleeper Street. Hynes said the tent erected for the gathering was about the size of the planned chapel.

"I want to thank all of you for your support and encouragement along the way, and I know that I will do everything I can to make this project a complete success -- which for us means on time, under budget, and all according to plan," Hynes said.

Before offering a prayer and sprinkling holy water on the grounds, Cardinal O'Malley gave remarks.

"For me Thanksgiving has already begun today. I am thankful for the presence of so many people here today, the enthusiasm that this new chapel is generating," the cardinal said, taking to podium.

He spoke about the history of the original chapel, built by Cardinal Richard J. Cushing as a workers chapel in the first half of the century.

"The waterfront has always been the defining element in the history of the City of Boston. It was Cardinal Cushing, who was such a great builder, who had the wonderful idea of putting a chapel here to be able to serve all of those working in the waterfront," Cardinal O'Malley said.

He also pointed out that the new chapel will fit into the plan of the larger Church laid out by Pope Francis, which he calls a "culture of encounter" in which the Church reaches people where they live.

"This is what we need in the world where there is so much alienation and isolation. We hope that the Church will be here to help people to find friendship with the Lord and with one another in a sense of community," he said.

He thanked the mayor, Hynes, the developers, civic officials, and business leaders at the event.

Guests of the developers and the archdiocese told The Pilot afterward that the groundbreaking marked a renewal of and continued history of Church presence in South Boston.

Central Region Episcopal Vicar Father James Flavin spoke about his role in reaching out to people in the area as an episcopal vicar, and touched on the reference by Cardinal O'Malley to Pope Francis.

"We're right here at the crossroads of the City of Boston with all this new building going on. This is your main gateway into all this new development, so we can't help but encounter people right here, physically present with the Church. We're making a commitment to bridge all the different communities together," he said.

Father White said the Church has had a presence on the waterfront since the mid-1800s through St. Vincent de Paul Parish, and will continue that presence.

"It's very exciting to be moving along with the development here on the South Boston waterfront," he said.

Anna White and her son Thomas, South Boston parishioners of St. Vincent de Paul Parish, were on hand to celebrate the groundbreaking for the new chapel, but the original chapel will always hold a special place in their memory.

The actual parish required repair that year, so Thomas White and a handful of other young people made first communion at the chapel. They were the last to do so in the old chapel, at the time of this writing.

"I kind of figured that I was one of the first, but not necessarily the last," he said.