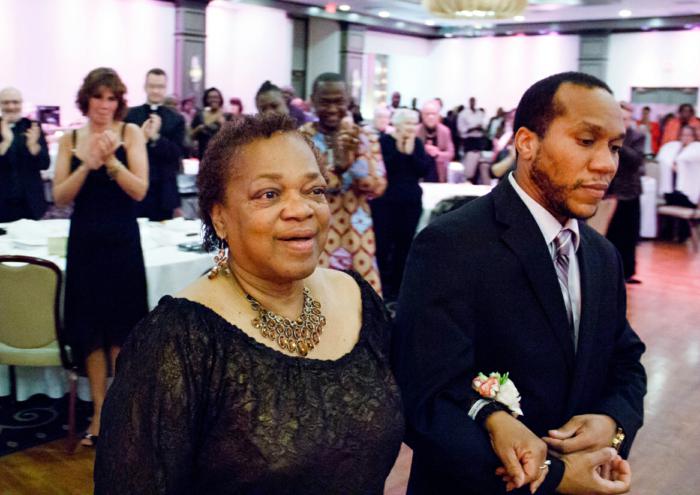 RANDOLPH -- Lorraine "Ma" Smith and Lorna DesRoses received recognition for their work on behalf of the Black Catholic community of the Archdiocese of Boston at the 21st annual Bishop James Augustine Healy Award Dinner, held Nov. 21 at Lombardo's in Randolph.

Smith received the Bishop Healy Award for her work at St. Katherine Drexel in Roxbury, her service in teaching and sharing the Catholic faith with Black Catholic youth at a retreat each summer, and her commitment to the greater community as a volunteer.

DesRoses received the Harold R. Perry Award established by the Black and Indian Mission Office for her evangelizing work on behalf of the Church, as director of the Office for Black Catholic Ministries since 2004.

"So many of you when I stepped into this position helped me to do what I do, and you continue to help me," DesRoses said.

She said the support she received personally helped her adapt and overcome challenges as she took up the ministry of outreach to the Black Catholic community in Boston.

"Many of you shared your story of being a Black Catholic within the Archdiocese of Boston. Some of it was filled with joy, some of it sadness, but you were willing to take that time to share that with me, and to help me, and help me grow. So, I thank you," she said.

Msgr. Raymond East, a pastor in Washington, D.C. and 2005 recipient of the Teacher of Peace Award from Pax Christi USA, gave the keynote address with a particular focus on giving honor to the two recipients. He said he wanted to address three points.

First he addressed purpose in the context of God's plan for individual people.

Leading the audience to recite the familiar phrase with him, he said God made us to "know him, to love him, and to serve him."

"When God gives you a purpose, that purpose pushes out fear," he said.

"Our two honorees tonight, they put aside fear so that they could say 'Yes Lord' just like Mother Mary did," he said.

He added that the purpose of the Church is to evangelize, as he honored the women for spreading faith through their actions and outreach.

"That's the purpose. If we are not evangelizing, then why are we here eating all of this good food and just sitting on the 'premises'? We need to stand on the 'promises' and evangelize," he said.

After the keynote, Smith received her award. Msgr. East had credited her for earning the nickname "Ma" for her motherly service to her Church, her community, and the people around her.

Smith spoke not about a drive toward her purpose, but a wavering from it, a turning away from it, and finally a renewal of it as she turned back to the Church.

"Years ago, as a matter of fact 32 years ago, I was diagnosed with breast cancer. I gave everything up. I put my hands up. I was mad as hell with God. He was just not my best friend. I turned my back on church," she said.

She said the support of Roxbury pastor Father Thomas F. Clark and her godmother, Sister Mary Hart, RGS, helped bring her back to the Church.

"They turned me around and put me at the gate of faith. Faith is strong. If you don't have it, you're weak, but if you have somebody who can help you, assist you to walk through that garden, the weeds are gone and the flowers are strong," she said.

Cardinal Seán P. O'Malley spoke following the presentation of the awards. He said Catholics need to "turn up the volume" on works of evangelization.

"We have the Good News, but a lot of people are hard of hearing," he said.