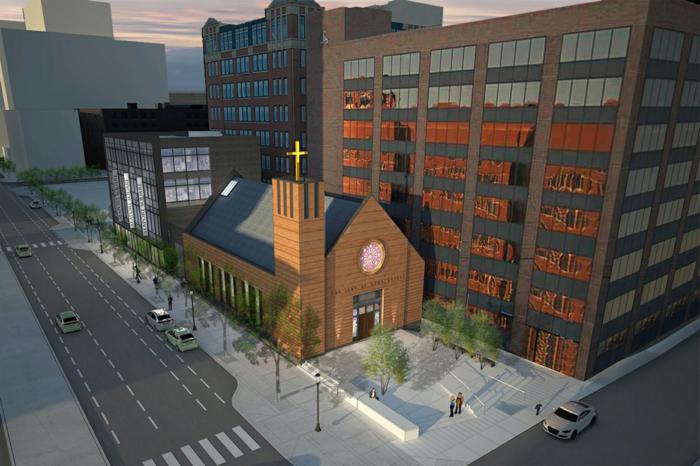 An architect's rendering depicts the new Our Lady of Good Voyage Chapel on Sleeper Street and Seaport Blvd. in South Boston's Seaport District that will replace the current Seaport Chapel on Northern Ave. Groundbreaking on the new chapel will take place Nov. 21 and is expected to be completed in late 2015. Pilot photo/courtesy ADD, Inc.

BOSTON -- The groundbreaking for the new location of the Our Lady of Good Voyage Chapel, Nov. 21, will mark the continuation of more than half a century of prayer and faith in South Boston's Seaport District.

"Our Lady of Good Voyage Chapel, newly constructed at a central location in the Seaport, will continue to serve as a place of prayer and comfort to a diverse community of professionals, families, and travelers. The new chapel design will embrace the history of generations of maritime workers and welcome all who will live, work in and visit the Seaport," Cardinal Seán P. O'Malley said in a statement.

The present one-story red brick chapel has stood for over 60 years on Northern Avenue, as taller buildings sprung up as a wave of development has come to the neighborhood. Developer Boston Global Investors and the Archdiocese of Boston separately confirmed that the chapel will remain open until the new building is ready.

Established as one of several workers' chapels under Cardinal Richard J. Cushing, the original Chapel of Our Lady of Good voyage served the dockworkers, seamen, fishermen, and other workers in the area where it earned the monikers Fish Pier Chapel, Waterfront Chapel, and most commonly the Seaport Chapel.

Designed by Boston architect John A. McPherson, and constructed in 1952, the Seaport Chapel at one time served the crews of the nearly 1,000 merchant ships that docked in Boston each year.

"That community was really Catholic, the fishermen, so they needed a chapel near the water," McPherson said.

The vestibule of the present chapel features a shrine to Our Lady of Good Voyage, donated by a former pastor of the Gloucester sailors' chapel. The statue in the shrine depicts the Virgin Mary holding a model of a Gloucester fishing schooner -- a uniquely Massachusetts image.

Over time, the chapel remained a fixture of the neighborhood and became a spiritual gathering place for a diverse working community that included an increasing number of professionals, while maintaining its connections to its congregation's blue collar roots. One sign of that connection came this August, when the chapel was chosen as the location for a Mass dedicated to the dignity of workers that was attended by members of Service Employees International Union Local 32BJ.

"It's a diverse community. (The chapel) is open all day, and there are always people in there praying, lighting candles. It's quite a devotional place," Father Flavin said.

In December 1952 Cardinal Cushing celebrated the first Mass at the current chapel, built on land donated by Frederic Dumaine Jr., President of the New York, New Haven and Hartford Railroad Company, which transferred the property to the archdiocese for the price of $1.

The new 5,000 square foot structure, capped by a steeple and including a choir loft, will be located at the intersection of Seaport Boulevard and Sleeper Street and will be part of a 23-acre, $3.5 billion development of what is called Seaport Square. The new chapel is slated for completion in late 2015 and the current Our Lady of Good Voyage will remain open until the new structure is complete.