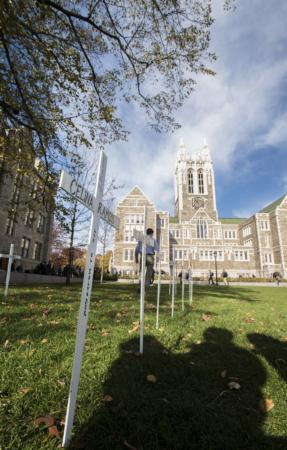 White crosses with the names of the six Jesuit priests and two women who were with them were erected on the Boston College campus during a Nov. 10 memorial prayer service and will remain there for the rest of the month. Pilot photo/courtesy Lee Pellegrini, Boston College

CHESTNUT HILL -- Members of the Boston College community will mark the 25th anniversary of the murders of six Jesuit priests, their housekeeper and her daughter at the University of Central America on Nov. 16, 1989 with observances on campus, in El Salvador and in Washington, D.C.

On Monday, Nov. 10, a prayer service was held at noon on the Quad on BC's Chestnut Hill campus. White crosses with the names of the victims were erected during the service and will remain there for the rest of the month. According to Boston College campus minister Father Don MacMillan, SJ, this annual tradition of erecting the white crosses honors the victims and serves as a reminder that justice in the world is still elusive.

Boston College also has an exhibition, titled "One Night in November: The 25th Anniversary of the Jesuit Murders in El Salvador," on display at its O'Neill Library until Jan. 7. Curated by Father MacMillan and BC freshman Michael Burke of Waltham, the exhibition comprises several books -- including biographies of the Jesuit martyrs, photographs, related articles, and other materials related to the slayings.

"This exhibit is a small token of reverence for these martyrs, meant to spark an interest in the hearts and minds of BC students as well as faculty, administration and staff: to search for ways to establish peace, fair trade, equality and unconditional love with our neighbors on the same continent," said Father MacMillan.

"I hope viewers will read up on the causes of that civil war and understand that the call of the gospel left these Jesuits no other choice but to be voices for the voiceless. It cost them their lives, but the call to justice has been raised and is still being voiced today," he added.

Burke said, "I want people to reflect on the way the martyrs fought for justice and affected change ...and continue to create a better world by following that example."

On Friday, Nov. 14, Father MacMillan and Father Richard McGowan, another Jesuit priest from Boston College, will travel as a part of delegation of faculty, staff, students and presidents from Jesuit institutions to El Salvador for a three-day commemoration. Father McGowan, an associate professor of practice in the Carroll School of Management, has taught economic development courses at the University of Central America in San Salvador many times. Father MacMillan was honored with the 2012 Robert M. Holstein Award in recognition of his demonstrated commitment to social justice.

Father MacMillan will head directly from El Salvador to Washington, D.C. to join the Boston College delegation at the annual Ignatian Family Teach-In for Justice (IFTJ), Nov. 15-17. The IFTJ is a social justice conference sponsored by the Ignatian Solidarity Network, a national, lay-led, social justice organization that works in partnership with Jesuit universities, high schools, parishes, and ministries and the larger Church throughout the United States to effect positive social change on critical issues facing the world.

"Not only will IFTJ participants commemorate the lives of the martyrs... but their advocacy will make a critical and timely impact on Capitol Hill," said Christopher Kerr, executive director of the Ignatian Solidarity Network. In addition to the workshops, keynote addresses and policy discussions, there will be a rally on Capitol Hill on Nov. 17 and participants will collectively meet with more than 100 Congressional offices to advocate for issues related to immigration reform, human rights in Central America, and climate change.

The expected 1,300 Teach-In attendees represent more than 80 Catholic institutions in 25 states, Canada and Mexico. The conference also will serve as host for the national premiere of a "Blood in the Backyard," a documentary depicting the story and legacy of the Jesuit murders in El Salvador. The Boston College School of Theology and Ministry is one of the co-sponsors for the Ignatian Family Teach-In for Justice. The Teach-In will be live streamed Nov. 15 and 16 at igsol.net/iftlive.