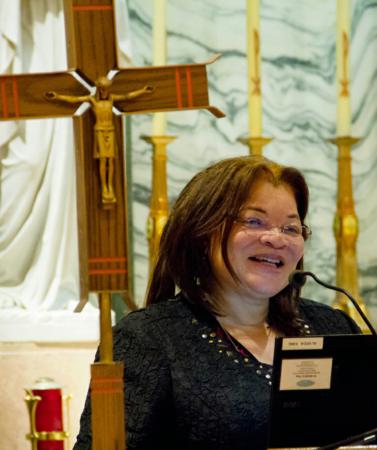 ROXBURY -- The niece of Rev. Martin Luther King Jr. told an audience at St. Patrick's Church in Roxbury that she sees working on behalf of the unborn as a continuation of the civil rights movement.

Alveda C. King spoke as a guest of the parish and the Franciscans of the Primitive Observance, Nov. 7 at an invitation-only meeting for clergy in the lower church. She also spoke at two public events on Saturday Nov. 8.

As Father Peter J. Giroux, FPO, introduced Alveda King, he said her uncle had also inspired him in his spiritual journey. Father Giroux said he turned to Christ and the pro-life teachings earlier in life after reading a biography of King.

"His courage in the fight against injustice, racism, and the like, inspired me to get involved in the pro-life movement. That was also a big part of my vocation, so I am very honored to introduce his niece, Dr. Alveda King," he said.

King serves as a pastoral associate and director of African-American Outreach for Priests for Life and Gospel of Life Ministries in New York. Daughter of Rev. A.D. King and his wife Naomi Barber King, she grew up during the civil rights movement led by her uncle.

King is not Catholic, but maintains advocacy for the unborn as part of her work with the Silent No More Awareness Campaign, sharing her testimony of two abortions, God's forgiveness, and healing.

As King walked guests through some of the resources available at the Priests for Life website, she presented an entry from her blog on recent November elections -- which largely favored conservative and pro-life candidates.

"Why don't we give the real credit and the real glory to God who is in charge of current and eternal events? Lest we forget how bleak things were looking before the past Election Day, let us pause and give thanks to God for the victory," she said.

She reminded guests that living the faith is important for Christians, where the message of the sanctity of life is concerned.

"If you want to be great in God's kingdom, you really do have to be a servant of God. These are things that people tend to forget," she said.

She also showed a video preview for her book "King Rules," a video from the website of a group called Maafa 21 -- which identifies abortion as a "Black genocide," and a documentary on the abortion industry called "Blood Money."

"I kind of just wanted to introduce a few of those things to you about why it's so important and why what all of us do makes a difference," she said.

She said supporting those who choose life requires awareness of the individual needs of people and families.

She also spoke about her own experience of abortions earlier in her life, and later conviction of Christ's forgiveness.

"I was so blessed to know that I didn't have to live like that, that God forgave me, that Jesus had come on the cross and died for me, that I would see those babies in Heaven," she said.

She said her work has been inspired by her family and the community she comes from, the first of five children raised in Atlanta, Ga.

After her talk, she told The Pilot that her ministry now is rooted in what her family taught her, particularly her father and her uncle. Both her uncle's family and her family experienced bombings at their homes as the brothers stood together publicly for their beliefs.

Chaplain of Norfolk County Corrections Father Thomas F. Bouton said he appreciated the message of Alveda King at St. Patrick's and pointed out that the defense of the unborn is a responsibility of all Catholics.

"I am very encouraged by the presence of Dr. King here tonight, and her message on the dignity of the human person and the right to life, and the importance of defending that right from the moment of conception to the moment of natural death," he said.