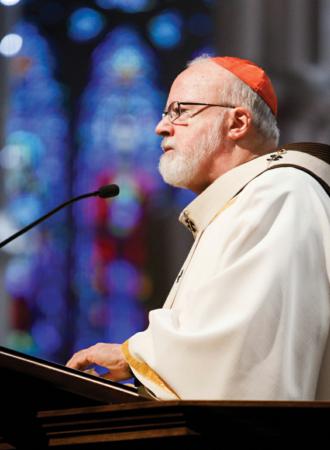 Cardinal O'Malley delivers his homily at the All Souls Mass at the Cathedral Nov. 2. Pilot photo/Gregory L. Tracy 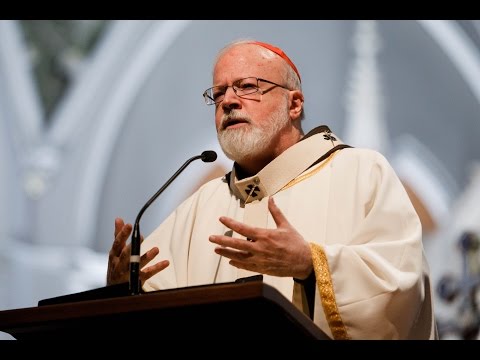 SOUTH END -- While hundreds were standing in line at Boston's Faneuil Hall to pay respects to former Boston Mayor Thomas M. Menino, hundreds of others were gathered at the Cathedral the Holy Cross in Boston's South End to pray for his soul, and the souls of all the faithful departed.

Cardinal Seán P. O'Malley celebrated the Mass for All Souls Day, Nov. 2, at which Catholics remember and pray for all those who have died. Despite the cold rain that mixed with the season's first wet snowflakes, an estimated 400 worshipers including Boston Mayor Martin J. Walsh gathered at the cathedral for the Mass, which was offered for Menino and his family.

Menino, who served as Boston mayor from 1993-2014, passed away Oct. 30 at age 71, just days after announcing that he was suspending treatment for cancer diagnosed in February.

"Today the city of Boston is in mourning, on this All Souls Day, for Mayor Thomas Menino, the longest-serving mayor in Boston," the cardinal said, beginning his homily.

"Our prayers are united with those of the people of Boston, and from all over, who offer supplications for the eternal rest of Mayor Thomas Menino, who lies in state today at Faneuil Hall and will be buried tomorrow from the parish church where he received the sacrament of baptism," the cardinal said.

In his homily, he recalled the former mayor as a man consistently dedicated to others.

The cardinal continued, "Our paths would cross often at groundbreakings for low-income housing, and homeless shelters and in neighborhoods convulsed with street violence. Mayor Menino cared deeply about Boston and its very diverse population, and worked tirelessly to make this city the very best place possible."

The cardinal also spoke of Menino as a man of faith and said that Menino once told him he prayed to St. Joseph every day.

"In Catholic piety, Joseph the Carpenter is the patron saint of a happy death because Joseph died in the arms of Jesus and Mary at his home in Nazareth. Tom died having received the sacraments of the Church and surrounded by his beloved Angela and their close knit family," the cardinal said.