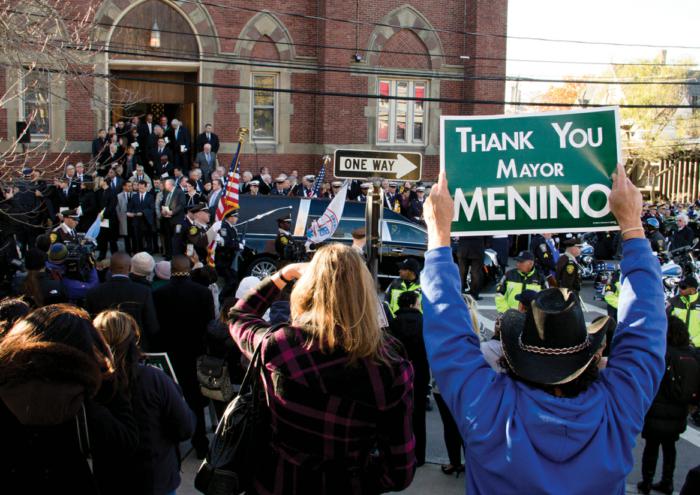 HYDE PARK -- Lining the streets of Boston and carrying signs of thanks outside Most Precious Blood Church in Hyde Park during the funeral for former Boston mayor Thomas M. Menino, Nov. 3, residents said goodbye to a man who served the city he loved for more than 20 years.

He grew up in Hyde Park, and neighbors who lined the street near the church recalled a man who remained beside the people he served as mayor throughout his life.

Sergio Aquino, 49, a resident of Hyde Park and a parishioner of Most Precious Blood, stayed on the sidewalk from before the funeral started until well after it ended to pay tribute to a mayor he deeply respected.

He said Menino contributed to a more welcoming atmosphere in the city and between the neighborhoods, an atmosphere that developed over time and remains today.

"You see a very urban linking of the positivity of the people, and it's a reflection of what? The leadership," Aquino said.

"I really think it will stay vibrant that way," he said.

Those gathered to pay their respects recalled a mayor who grew up in a city divided along neighborhood lines as well as racial lines. Many of those who spoke with The Pilot said the mayor built bridges across those lines, brought the city together, and ultimately led Boston through a grave test of that unity.

Loula Xanthe-Moschon shouted out "Always you will be our mayor," as Boston Police carried Mayor Menino's casket from the hearse through the doors of the church.

She told The Pilot afterward said Menino would always be the Mayor of Boston to the people of the communities he welcomed and connected.

"He reached out to keep the groups together," Father Conway said.

Father Conway said the vision of Menino and his work served as a counterweight against events in the history of the city prior to his service. After such developments as school busing in the 70s and 80s had divided the city, the Menino administration worked to reunite it.

"All the time he's been in office I think part of it was to recover, get it back, get back to neighborhoods, get back to people united," he said.

That unity would face a grave test when bombs exploded near the finish line of the Boston Marathon in April 2013.

Speaking after leaving the funeral Mass, Former Boston police commissioner Edward F. Davis III, who served alongside Menino in the days after the bombing, recalled the mayor's leadership during that time.

"Basically, Boston Strong was born of the type of response that we saw from Mayor Menino. He got up from his sick bed. He embraced his responsibility and duties, and he showed us all the way. He really was the flesh and blood of Boston Strong," Davis said.

Davis said the crisis could be considered a test of the vision of a unified and united Boston under Mayor Menino.

"If it was a test, we came through very well," Davis said.

Carlos Arredondo, pictured in a now world famous photograph wearing a cowboy hat as he rushed to the aid of Marathon Bombing victim Jeff Bauman, also stood across from the church doors during the funeral.

Wearing a black cowboy hat, he said he came out to support the former mayor, the family he left behind, and the community he served.

"I think it's a moment where we remember and are grateful for the work that he did for the community, for his family, for the service they provided as well," he said.

In days and months following the attacks, Arredondo said he interacted frequently with the mayor at public events. He said the mayor always seemed to make time for him and others at such events.

When the time came to thank those who stepped up to help others the day of the bombing, Mayor Menino was on crutches with a healing broken leg.

"Under his medical condition he approached many of us to say thank you for what we did that day, and for the service that we provided to the city," Arredondo said.

Arredondo said he has worked as a peace activist and a Red Cross volunteer over his years in Boston.

"It's something we learned through Mayor Menino. Service was very important for him," he said.