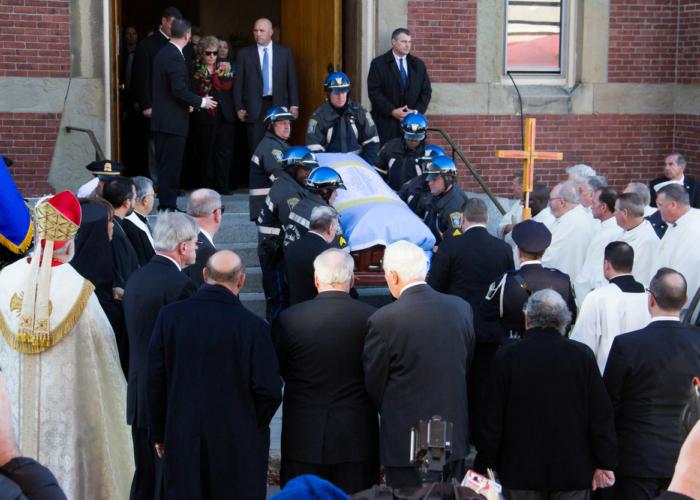 HYDE PARK -- The city and the nation said goodbye to the longest-serving mayor of Boston, Thomas M. Menino, Nov. 3, during his funeral Mass at Most Precious Blood Church in Hyde Park -- the parish where the former mayor had received baptism and attended grammar school decades ago.

The 53rd mayor of Boston, who held office for just over 20 years, died Oct. 30 of cancer. He was 71. Menino had finished his service to the City of Boston the same year he died.

Father John J. Connolly Jr. served as homilist at the Mass, as Cardinal Seán P. O'Malley presided. Christian leaders, including Greek Orthodox Metropolitan Methodios and Rev. Liz Walker, were present at the front of the church as well.

Those who spoke at the funeral credited Menino with a legacy of bringing Boston together, said he worked on behalf of the people, and noted his leadership when bombs exploded at the finish line of the Boston Marathon in 2013.

Walsh noted the dedication with which Menino addressed what some would consider small problems.

"Today we come together to celebrate a great man, a history-making mayor, and a life of accomplishment -- Thomas Michael Menino, the relentless, the big-hearted, the people-loving urban mechanic has gone to fix potholes in heaven," Walsh said.

He noted that the former mayor's family was the joy of his life, while those who served alongside Menino were his "second family." He said the former mayor believed in underdogs and worked on behalf of all the people of Boston.

"The proof is all around us. Tom Menino had Boston's back," he said.

Gov. Patrick spoke of Menino as a "great man" who, despite not endorsing him during his first run for governor, patiently shared "time and wisdom with a political newcomer."

"That was the thing with him. He seemed to make time for everyone, even a political nobody like me. His politics were very personal that way," Patrick said.

He noted that at public events, Menino made time for children and neighborhood residents.

"After more than 20 years of this kind of personal politics, it hardly surprises me that half the city's residents report that they have met him. What surprises me is that it was only half," the governor said.

Patrick also affectionately joked about the famous verbal gaffs of the former mayor.

"You always knew what he meant, and more importantly, that he meant what he said," Patrick said.

He noted that Menino addressed details in an effective way, but also saw a larger vision -- demonstrated in the revitalization of neighborhoods like the Seaport or Dudley Square -- as a city came together across racial and neighborhood lines.

Patrick said Menino helped solidify the notion of Boston Strong, when the mayor checked himself out of the hospital with a broken leg after the bombings at the Boston Marathon.

"That show of strength and resolve helped Boston be strong again," Patrick said.

Patrick thanked Angela Menino and her family for sharing the former mayor with Boston as he balanced work and family.

"It seems especially sad that he would be taken just at the point when you got his undivided attention. We promise to be there for you, to help fill some small part of the huge void that his passing leaves, and we thank you for the grace and strength you have shown in these difficult days and weeks and in all of the days of your lives together," he said.

In the homily, Father John J. Connolly Jr. touched on the love of family Menino showed.

"We come together today in the midst of our mourning and sadness and we mourn for someone whose life was taken from us too quickly. We recognize that in the life that Tom lived and shared with not only his family, but with his civic family, we received a blessing," Father Connolly said.

Father Connolly connected the way Menino lived with the readings proclaimed at his funeral.

"In our second reading, St. Paul spoke eloquently about how nothing can separate us from the love of Christ -- nothing. Death can't. Evil can't. Bombs on Boylston Street can't. Tom Menino believed that and lived that every day of his life," he said.

Father Richard C. Conway, known as "Father Doc" on the streets of Dorchester, proclaimed the Gospel of Matthew. Father Connolly related the passage to the late mayor's life.

"Love the Lord your God with all your heart, mind, soul and strength, and love your neighbor as yourself. In ways great and small, for more than 70 years, Thomas Michael Menino did that on a daily basis, and he did it in an exemplary way," Father Connolly said.

Father Connolly also spoke about the significance of the mayor bringing people together, manifest even when Menino was thinking about his future as a Catholic school student at the now-closed St. Thomas Aquinas High School in Jamaica Plain.

Father Connolly recounted that shortly after he became mayor, Menino held a gathering for some of the religious sisters who had educated him. After the gathering, the mayor recounted how a sister had asked what he wanted to do with his life when he was a senior in high school. Menino had said he wanted to build bridges.

"He said that himself, after he met with those sisters, that he had indeed fulfilled that high school senior's not-quite-lofty dream, because the bridges he built between and among the neighbors and neighborhoods of this city, and peoples near and far, are perhaps his most worthy monument," Father Connolly said.

Speaking after Communion, Menino's granddaughters Samantha Menino and Olivia Fenton offered words of remembrance for the grandfather they called "papa."

Fenton said her grandfather would call her every day if she didn't call him first.

"I would call him up and ask him what he was doing, and within an hour or so I would be riding in the backseat on our way to an event with him," she said.

Samantha Menino said her grandfather was always thinking of others, even when she called him to make sure he knew school needed to be cancelled when it snowed.

"He reminded me that children in Boston relied on school lunch and if they didn't go to school they wouldn't have a warm place to stay," she said.

Menino's chief of staff Mitchell Weiss also offered words of remembrance, recounting the mayor's commitment to his staff and his office.

"The mayor who never sought higher office has one now," he said.

Before offering the final commendation, Cardinal O'Malley also tendered his condolences to Angela Menino and the family the former mayor left behind.

"That journey that he began over 70 years ago comes to an end now. His life was about building community and even in his death he strengthened us as a community. The whole city has stopped to notice and to feel one with him, with each other, and with his family. He was a good friend. He will be very, very sorely missed and fondly remembered," the cardinal said.