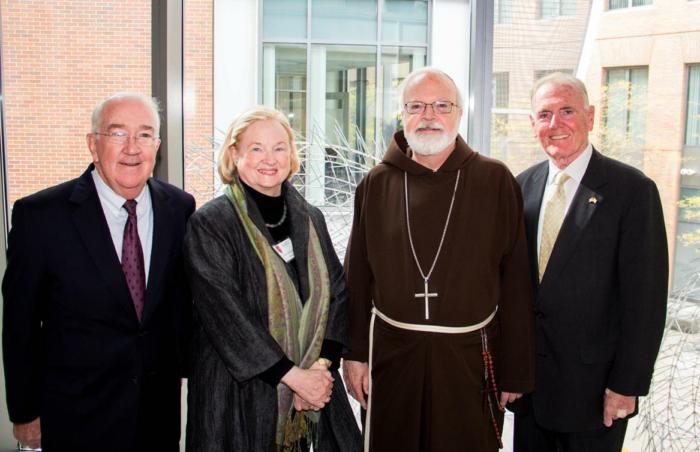 The three U.S. ambassadors to the Holy See with ties to Boston, current ambassador Kenneth Hackett, and former ambassadors Mary Ann Glendon and Raymond Flynn, are pictured with Cardinal Seán P. O'Malley at the luncheon following the Combined Celebration of the Red Mass and the White Mass at the Cathedral of the Holy Cross, Oct. 26, 2014. Hackett was the keynote speaker at the event jointly hosted by the archdiocese's guilds for Catholic lawyers and physicians. Pilot photo/Christopher S. Pineo

BOSTON -- The Archdiocese of Boston's Catholic Lawyers' Guild and the Guild of St. Luke for healthcare workers came together for the combined celebration of the Red Mass and the White Mass at the Cathedral of the Holy Cross, Oct. 26. The Mass was followed by a luncheon and a keynote speech from U.S. Ambassador to the Holy See Kenneth Hackett.

In his homily, the cardinal offered a somewhat novel take on the Parable of the Good Samaritan in the Gospel of Luke.

Rather than point to the parable as an example of how to treat a neighbor in need, he spoke instead about the lawyer who questioned Jesus Christ and prompted the parable.

"When the lawyer asked Jesus what was the most important of the 613 commandments of the Torah, he was doing us all a favor. We need to feel and to believe that love of God and love of neighbor is what is the most important, and that only God will save our planet from grinding poverty and violence," Cardinal O'Malley said.

He spoke of the important role those in the legal and healthcare professions play in the dialogue the Church has with the world, as it encourages justice for the poor, the marginalized, and the unborn.

"You, my friends in the legal profession and the healthcare world, are uniquely placed to enter into this dialogue. It will help us down a path to a better world and a civilization of love," he said.

After Mass, guests headed to Seaport Hotel for the luncheon, the talk from Hackett, and the presentation of the first Honorable Joseph R. Nolan Award.

Traditionally, the Red Mass has been celebrated in early fall, around the start of the judicial term and the White Mass has been celebrated near the Oct. 18 feast of St. Luke, the patron saint of physicians. This year, the Masses had been rescheduled to celebrate together the contributions of law and healthcare to society, with the ambassador's experience pertaining to both fields.

"We are so pleased to have this combined luncheon for the first time. It is an inaugural event of sorts, and it's most apropos when you actually begin to think about the nature of our vocations and our learned professions," Doyle said.

"Events have conspired to focus both our organizations on this date, so we decided to cooperate on a program of mutual interest," Barravecchio said.

"Much like Judge Nolan, she was gifted with incredible talents that she has used for the benefit of everybody whose path she has crossed," Gillis said.

The presentation of the award was followed by the keynote address of Ambassador Hackett, a Boston native who headed Catholic Relief Services until he was named Ambassador to the Holy See in August 2013.

As Hackett began, he pointed out the service of Cardinal O'Malley to the Church since the installation of Pope Francis.

"It's not just the Council of Nine, but heading up the Pontifical Council for the Protection of Minors, and these other little this and thats that Pope Francis may throw his way. We in the Vatican diplomatic community are just amazed at his energy, his wise council, and his ability to get important things done. That's special," Hackett said, as he thanked Cardinal O'Malley.

In his talk, Hackett gave a detailed outline of diplomatic relations between the United States and the Holy See dating back to the days of the Founding Fathers.

He said the first high-level contact between the Holy See and the U.S. came in 1788.

"That was when George Washington informed Pope Pius VI, through his envoy Benjamin Franklin, that as is stated 'in our newly born republic, there is no need for the U.S. Government authorization for the Vatican to appoint bishops.' The pope then appointed John Carroll as the first Catholic bishop in the United States," Hackett said.

Despite that early outreach, Hackett said the new nation would not engage in an entirely trust-filled relationship with the Vatican as time went on.

"In 1867 there was actually a law passed that forbade and prohibited the use of U.S. Government funds for any diplomatic presence at the Holy See," he said.

In 1919, President Woodrow Wilson became the first U.S. president to meet a pope, when he visited Pope Benedict XV in Europe as the World War I drew to a close.

Anti-Catholic sentiment in the U.S. still held sway, according to Hackett, but that would change with time.

"It finally took the shared enemy of communism to bring the U.S. and the Catholic Church back together, to realize how their cooperation could further mutual policy goals. Pope St. John Paul II was the game changer. Ronald Reagan realized that Pope John Paul II had done something spectacular in his work with the Solidarity movement in Poland, and President Reagan wanted to be part of that," Hackett said.

In 1984, President Reagan appointed William A. Wilson as the first U.S. ambassador to the Holy See, but some points of contention still remained -- particularly after the Cold War. He cited the example of Pope John Paul II who vehemently opposed the U.S.-led war in Iraq.

"There are issues of agreement and issues of disagreement, and I have seen first-hand during my one year that the areas of common interest between the U.S. and the Vatican far outweigh the issues of divergence. The relationship continues to be relevant and enduring as we partner with the Holy See to promote peace and human dignity," Hackett said.

Both Mary Ann Glendon, who served as ambassador under George W. Bush from 2008 until 2009, and Ray Flynn, who served under Bill Clinton from 1993 until 1997, attended the Mass.

"I don't know how often the doctors and the lawyers have their Mass on the same day, but as the cardinal said in his homily more and more of the religious freedom questions that are facing the Church right now involve legal issues arising out of healthcare," Glendon told The Pilot at the luncheon.

"I think we all feel pleased that the three Boston ambassadors to the Holy See can get together," she said.

Flynn, who is also the former mayor of Boston, noted the privilege of Boston to have had three former ambassadors to the Holy See.

"There is no other city in America that has that honor, and I am proud to be among them," he said.