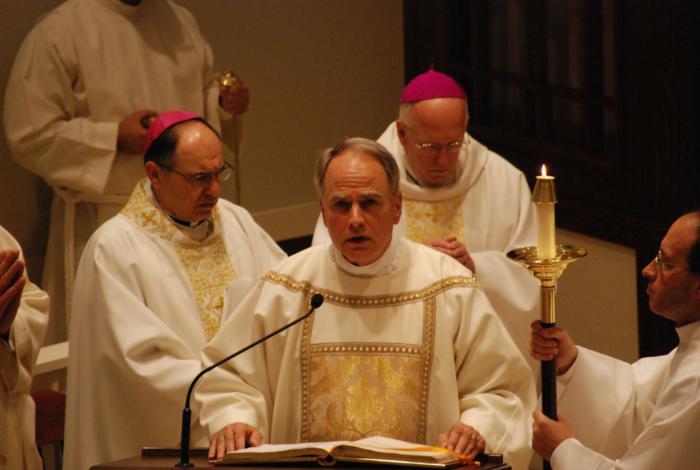 A record number of alumni priests returned to Weston on Oct. 21-22 as Pope St. John XXIII National Seminary celebrated Alumni Days in a special way in honor of its 50th anniversary year.

The two-day celebration featured keynote presentations by Kenneth Hackett, the U.S. Ambassador to the Holy See, and Father Charles Healey, SJ, on the 50-year history of the seminary.

Hackett, the former director of Catholic Relief Services, shared his journey from Boston's Catholic schools to Rome, where he lives and works as the U.S. liaison to Pope Francis and the Vatican. Father Healey chronicled the history of Pope St. John XXIII National Seminary and provided insights on the cooperation of Pope Paul VI with the vision of Cardinal Richard Cushing (Archbishop of Boston from 1944 to 1970) in building the seminary which specializes in forming men over 30 years of age for the Roman Catholic priesthood. Nearly 700 priests have been ordained following graduation from the historic seminary since its first ordination class in 1968.

Included among the guests were Bishop Paul Swain (Class of 1988), of the Diocese of Sioux Falls, S.D., and Bishop Peter Uglietto, vicar general and moderator of the curia of the Archdiocese of Boston and the seventh rector of the seminary.

"It was a great day of prayer and praise and thanks to Almighty God for the generosity, service, and commitment of all those who have been part of this seminary for the last 50 years -- seminarians, faculty, staff, alumni, trustees, and benefactors," said Father William Palardy, Rector.

"The spirit of welcome and hospitality extended by the current members of our seminary to all those who joined us for these days of celebration was warm and gracious, providing all those associated with the seminary with much hope, encouragement, and anticipation for what the Lord holds in store for our next half-century."

Alumni Days culminated in the celebration of the annual alumni Mass, with Cardinal Seán P. O'Malley as celebrant. Over 200 people, including the 70 concelebrating alumni priests, packed the seminary's chapel for the Mass. A dinner honoring the alumni followed the Mass.

Two members of the first ordination Class of 1968, Father Daniel Crowley of Boston and Father Harold "Hal" Murphy of Chicago, were in attendance. Priest graduates traveled from as far as Fairbanks, Alaska (Father Fred Bayler '09); Gallup, New Mexico (Father Jim Walker '99), Bismarck, N.D. (Father Patrick Cunningham '13); Orlando, Fla. (Father Ivan Olmo '13), and Peterborough, Ont. (Father Gerald Campeau '99) to reunite with classmates and share memories of their formation years. Most of the class of 1999 used Alumni Days as an opportunity to celebrate together their 15th anniversaries of priesthood.

"Each time I return to Pope St. John XXIII Seminary I am reminded of the fraternity of the priesthood and how important it is to stay connected with others, those who are priests and the seminarians who are journeying toward the priestly fraternity," said Father John Gloss Jr. of the Diocese of Metuchen, N.J. and member of the class of 2003. "The hospitality of students and staff, along with the spirituality and enthusiasm of the seminary helps to enhance each visit.

"The high point for me was both Father Healey's talk on our history and the Mass allowing all of us to join in celebrating the unity of the Eucharist. I was truly honored to concelebrate as part of a beautiful celebration."

Several members of the Class of 2014 also were in attendance for their first alumni Mass, including three of the five priests ordained last year for the Archdiocese of Boston: Father Jeff Archer, Father Kevin Hickey, and Father Mark Storey.

"It's easy for me to return, but I always look forward to reconnecting with fellow alumni priests," said Father Paul Sullivan of Boston, from the class of 2008. "It is energizing to see old friends and remember the excitement and wonder we felt during our days in the seminary in being called to the priesthood. As Cardinal Seán said in his homily, we are called to be shepherds and fathers. What a privilege and responsibility."