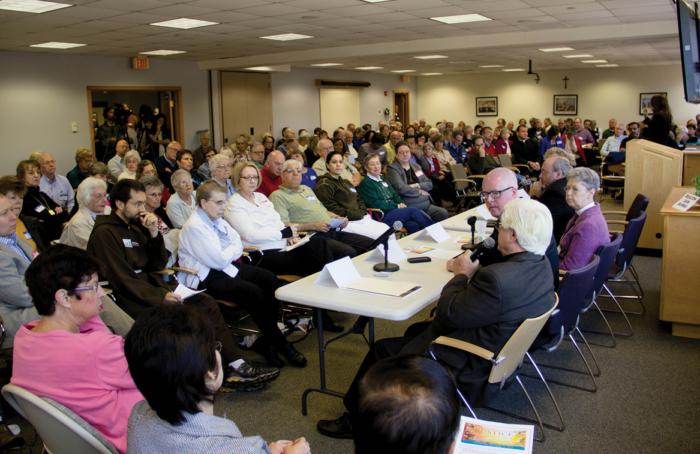 BRAINTREE -- The sixth annual Archdiocesan Justice Convocation themed "Social Justice -- a Pastoral Priority for the New Evangelization," Oct. 25, brought an overview on social justice including perspectives explored in the writings of Pope Francis together with a focus on how that can be applied in the parish.

He said to reach a point of understanding on the interplay of social justice, evangelization, and their importance in the Church, one should consider the Vatican documents "Gaudium Et Spes," the Pastoral Constitution on the Church in the Modern World and "Evangelli Gaudium."

"It is interesting to take these two documents together to think about social justice, the Church, and evangelization," he said.

He said the Second Vatican Council united sacramental, scriptural, and social elements within Catholic identity, in light of the apostolic constitution "Gaudium et Spes" -- a move that centralized social justice in the life of the Church.

Prior to that, he said, "the social tradition could easily be treated sort of like an extra credit course. If you were interested in that kind of thing, it was alright, but otherwise you could survive as a Catholic without having to deal with it," he said.

He said Pope Francis has moved the social teaching forward as well, in works such as "Evangelii Gaudium," which has presented a new opportunity.

"The social ministry is central to the Church's ministry. There are different levels and different tasks. The work of the evangelization, the chapter to which we are invited in this diocese and in the country, is to make the Gospel and its transformative power real in the world. Parishes are our as yet unrealized full potential that the invitation of the pope has given us," he said.

Patricia M. Dinneen, chair of Archdiocesan Pastoral Council Social Justice Committee, moderated discussion in the first panel to discuss moving forward with that vision on a parish level. During the panel she announced a new online tool available to those interested in social justice.

"Now on the Disciples in Mission web site (www.disciplesinmission.com) we are going to have a special part of the website dedicated to social justice. Those of you who want to establish a social justice committee will have templates that you can look at," she said.

Sister Boyle encouraged those creating the plans in parishes to move beyond obstacles that may only exist in concept before action is taken.

"Get past that old thing of assumed constraints," she said.

While some ideas included pushing for more guns manufactured with built in safety measures or creating more programs at churches or community centers to keep young people off the street and out of trouble, one theme came up repeatedly. Adults must, as a community, take an active interest in young people, in order to mitigate violence.

Providing events that welcome teens and young people, Rev. Wright said, can go a long way toward that goal.

"We all know that the number one factor in moving people from wherever they are to wherever they out to be is the presence of a caring adult in their lives, so what we really are trying to do is prepare a space where caring adults can engage with young people," he said.

Michelle Cherry, of St. Patrick Parish in Roxbury, said she attended the convocation in part to interact with people and share some of her experiences opening her home to friends of her son who were involved with gangs and caught up in cycles of violence in her neighborhood.

"I wanted to continue doing that, and to look at some of the exhibitions, talk to some of the people that could help gear me into being an evangelist and working more, not just in my neighborhood, or in my church, but in other neighborhoods or churches," she said.

Exhibitors included the Office of Worship and Spiritual Life, the Chaplaincy Programs' Prison Ministry, HEARTH Program for the Homeless Elderly, and Catholic Charities.

"This is a great opportunity for Catholics to become more aware of the social justice Gospel, which our Holy Father is emphasizing so much and holding up for people, to realize that part of our mission is to build a civilization of love -- to work for justice," he said.