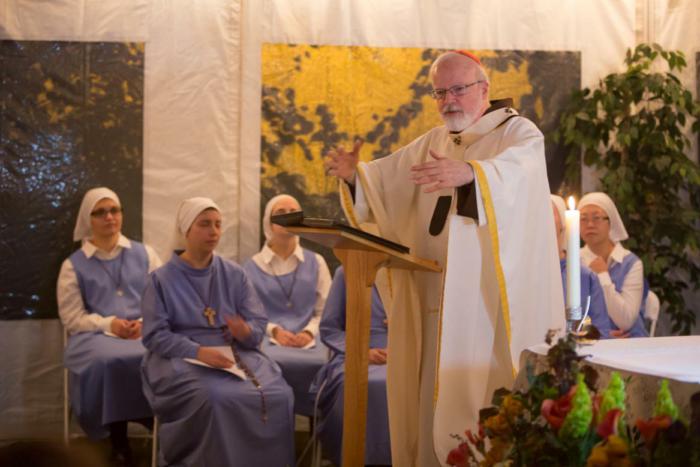 'Thursday evening (10/16), I went to Chestnut Hill to visit Mother Olga Yaqob and her sisters, the Daughters of Mary of Nazareth, a new religious community in the archdiocese that is thriving.' Pilot photo/CardinalSeansBlog.org

Thursday evening (10/16), I went to Chestnut Hill to visit Mother Olga Yaqob and her sisters, the Daughters of Mary of Nazareth, a new religious community in the archdiocese that is thriving. We had a Mass and dinner with the sisters, as well as a number of their friends and supporters who were present. Father Robert McCreary was also with us at the Mass. He has been helping the sisters in his role as spiritual director and has been helping them draft their constitution. The Mass was held outdoors in a tent, but despite the rain it was a very beautiful occasion. The sisters sang a number of songs for us and it was an opportunity for people to hear Mother Olga speak about the progress that the community has made in the last few years.

Sunday (10/19), I was happy to celebrate the Mass at the Cathedral to honor of our Catholic Appeal donors and volunteers. It was moving to see the chapel nearly filled to capacity and to share the Eucharist with so many of our faithful who give generously to the Catholic Appeal. We heard remarks from Father Lou Palmieri, pastor of the Quincy collaborative, and John Corcoran, an Appeal volunteer at St. John the Baptist Parish in Essex. Both Father Lou and John spoke about how his parish community has been strengthened through the more than 50 ministries and programs funded through the Appeal. In my remarks, I thanked the people for their strong commitment to the Appeal and for being a sign of the joy of the faith we live and believe in as Catholics.

On Monday (10/20), I went to Immaculate Conception Parish in Malden to celebrate Mass with nearly 1,000 members of Cursillo in the archdiocese. The wonderful thing about the Cursillo is that, more than any other group in the archdiocese, it really reflects the catholicity of the Church. For example, at the Mass we were joined by the Melkite Eparch Bishop John Elya and members of the Melkite Catholic community, a large Vietnamese contingent, a large Hispanic contingent, and a large Portuguese-speaking contingent along with many other parish groups. Of course the pastor, Father Dick Mehm, stood up and said, "I want all of you to register in this parish right now!" Of course the singing was just extraordinary. I was particularly struck by some of the songs that were sung in Vietnamese which were particularly beautiful. The Cursillo movement is celebrating its 70th anniversary this year. It is a wonderful apostolic movement in the Church, which has prepared a number of lay leaders. When I was in the seminary, I made the Cursillo with the Latin Americans in Washington. The Cursillo movement started in the United States in Texas. At first, they were only given in Spanish and it was not until the mid-60s that they began to give Cursillos in English. It made a very important contribution, because so many leaders of the Hispanic community -- a very large percentage of them -- were Cursillistas. Many of those people went on to become catechists, permanent deacons and members of parish councils. Even today, when you go to visit the prisons, all the volunteers are usually Cursillistas. It is a wonderful blessing for us and we are very grateful to Neal Finnegan, Mary Ann McLaughlin, Father Martin Hyatt and so many other leaders who are involved in Cursillo. I encouraged the Cursillistas to continue to invite people to be part of the Cursillo itself. It is a wonderful experience that prepares them for ministry and evangelization in the Church.