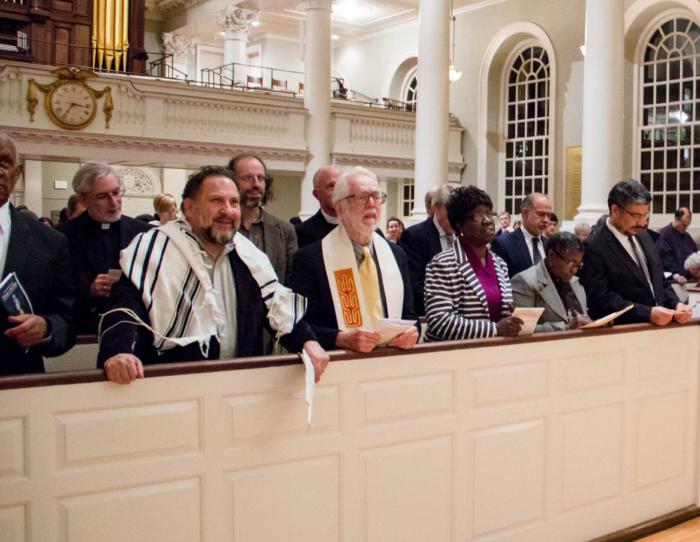 CAMBRIDGE -- Local faith leaders met at Memorial Church in Harvard Yard, Oct. 22, to pray and speak in solidarity with the "Yes for Justice Campaign" in support of families and communities.

A collaboration between Stand for Democracy and the Massachusetts Community Action Network (MCAN), the "Yes For Justice Interfaith Prayer Rally: Towards a New Dawn" brought together priests, imams, rabbis, preachers and laity of various communities in support of a "yes" vote in November on ballot initiatives Question 3 and Question 4. A "yes" vote on Question 3 supports repeal of current Massachusetts casino gambling laws, while a "yes" vote on Question 4 supports guaranteed paid sick leave for all workers in Massachusetts.

Many of those who participated in the rally shared their reasons for supporting the cause.

Imam Sherif Shabaka of the Islamic Society of Boston Cultural Center, spoke about the importance of solidarity between people of different faith traditions in standing up for shared moral teachings as followers of the God of Abraham.

"I am here to stand shoulder-to-shoulder with my brothers in faith, Christians and Jews," he said, before singing the Arabic call to prayer.

Speakers focused on reasons to oppose each of the ballot questions in the context of social justice for workers, families, and the communities in which they live.

Harvard Divinity Professor Harvey Cox, whose student Pedro Morales helped create Stand for Democracy, said promises of job growth and potential income create false hope for the poor, the marginalized and the families who will live near the proposed casinos.

"These are the people who will be preyed upon, that's why we're praying for them," said Cox.

Both presented the idea of defending families as a priority.

"I come to you this evening with greetings and prayers from the Episcopal Bishop of Massachusetts Alan Gates, who is so disappointed he cannot be with us tonight, for he shares with me the passionate concern about the important questions of social justice that bring us together," Zeigler said.

He spoke about the proposed partnership between casino developers, the Commonwealth of Massachusetts, and designated host communities.

"Casinos are not trustworthy community partners who build up healthy communities by producing goods or services that we actually need. Rather, casinos suck money from the economy. Largely, they are picking the pockets of those who cannot afford to lose their current earned dollars," he said.

In the weeks leading up to the event it became clear the gathering would draw fewer faith leaders than expected, but Rev. Virgil Wood, a Baptist preacher who worked with Martin Luther King Jr., said numbers were not the most important factor.

"Let's not waste time worried about who was not with us. Be thankful for those who are with us and fought the good fight," Wood said.

Representing the Catholic community at the gathering was Father Francisco Anzoategu.

"I come with the greetings from our bishop, Seán Cardinal O'Malley, who is not only aware of our meeting here tonight, he has been very supportive of our efforts," Father Anzoategui said.

He also conveyed the support of Bishop of Worcester Robert J. McManus, Bishop of Springfield Mitchell T. Rozanski, and Bishop of Fall River Edgar M. da Cunha, who recently issued statements of support for a "yes" vote on both questions with Cardinal O'Malley.

He called the promises of prosperity under expanded casino laws "false promises."

"We are here as a Catholic community urging every citizen in our beautiful state to vote 'yes' on Question number 3, so that we can repel this illusion of prosperity through predatory gambling. We are also here to urge everyone to say 'yes' on Question Number 4," he said.

Rabbi Moshe Waldoks, of Temple Beth Zion in Brookline, gave the closing prayer, before the gathered sang "We Shall Overcome" to end the evening.

"As we leave our assembly this evening, I am asking you to join me in this clarion call," the rabbi said.

He then yelled, "Shema," the Hebrew word for listen, and closed with the traditional Jewish prayer "Shema Israel."