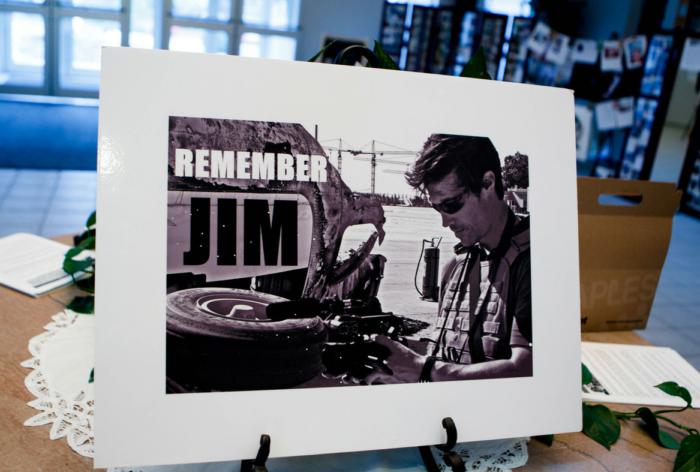 A photo of slain New Hampshire journalist James Foley is displayed during an Oct. 19, 2014 memorial Mass held at Our Lady of the Holy Rosary Church in Rochester, N.H. Pilot photo/Donis Tracy

ROCHESTER, N.H. -- Close to 1,000 of slain journalist James Foley's closest friends and family gathered at Our Lady of the Holy Rosary Church in Rochester, N.H. Oct. 19 to celebrate the life of a man whose life was taken by Syrian extremists on Aug. 19, but whose legacy lives on.

Foley was captured in northwest Syria, along with British journalist John Cantlie, in November 2012 by Shabiha militia, a group loyal to Syrian President Bashar Assad. For two years, the family prayed for his safe return. On Aug. 19, the Islamic State extremist group uploaded a video to YouTube entitled "A Message to America." In it, Foley was decapitated, and the killers threatened to execute more journalists -- a threat that was fulfilled when journalist Steven Sotloff was murdered only two weeks later.

Placed just inside the front doors of the church was a memory wall -- a display of some of Foley's photographs through the years, as well as mementos of his life, including the manuscript of a novel he was writing. Many of Foley's friends and family stood before the memory wall and shared memories of trips taken, of laughs shared, of moments now treasured.

Quietly, they filed into the church as Foley's parents, John and Diane, sat with their four children in the front pew of the packed church, to celebrate the life of their son and brother.

In a homily marked with examples in which Foley lived out the Beatitudes, Father Marc Montminy, pastor of St. Michael parish in Exeter, N.H. and close family friend, noted that Foley, who had first begun as an educator, working among impoverished communities through the Teach for America program, turned to journalism as a way to tell the stories of people in need.

"Today would have been Jimmy's 41st birthday," he said. "In these 41 years, Jim played a pivotal role in the lives of so many."

Father Montminy described Foley as, "an American journalist, a video reporter, an instructor in Teach for America, a friend, a son, a brother...a hero."

"It was people's stories -- stories of mechanics, of oil workers, mother and fathers. People living in the extremes," he said, that were the driving force behind Foley's mission.

Everything changed, Father Montminy continued, when in 2011 Foley and three other journalists -- Clare Gillis, Anton Hammerl and Manu Brabo -- were attacked in Libya by pro-Qaddafi forces. Helpless, Foley watched as his friend Hammerl was killed. The other three were captured and held as prisoners for 44 days.

"All did change for Jim at that point," Father Montminy stressed. "He wanted to see justice and peace. Blessed are the peacemakers."

After being released in May, 2011, Foley returned to his home in Rochester, N.H., but only seven months later began a series of trips to northern Syria as a freelance journalist working for GlobalPost, Father Montminy recounted.

"(Foley) became ever more captivated by the goodness of the Syrian people," Father Montminy said. "It was because of that goodness, he wanted to do something. He wanted to report the truth, so that the entire world would know what was happening."

Father Montminy went on to say that through all his ordeals, Foley was always sustained "by a deep faith."

"It was this faith that gave Jimmy, over the years, the capacity to believe when no one else was able to," he said. "He understood the importance and the power of a relationship with a God that perhaps he had not known so well, but that he had come to know much better in the midst of his suffering and pain. Blessed are the pure of heart, for they shall see God."

"What Jim did was he gave voice to people and places where there is no free speech or free press. He gave his life because of it," Father Montminy said. "Blessed are those who are persecuted for the cause of righteousness, for theirs is the Kingdom of Heaven."

Father Montminy concluded his homily by praising the Foley family, noting that their suffering never turned into despair.

"Your grief has been soaked in hope, and that's what Jim's life was all about," he said. "Your witness of faith is the greatest gift and legacy that you can give your son who taught us not only that you can live with conviction and purpose, but also how to die as a hero."

"He walked a dark journey at times. Perhaps even a dark night of the soul at the end. But when he stood before those who would take his life, he stood in hope. He stood in strength, with dignity," continued Father Montminy. "May the Lord wrap you in His arms. May He bring you into paradise where every tear will be wiped away."

Michael Foley, James' younger brother by two years, was the first to speak, noting that those gathered were there to "celebrate a life worth living, a life lived to the fullest, and one that has left a permanent impression on those he has touched."

"Jim was different from most people," he continued. "He had a combination of qualities that you don't often find. Jim put others before himself. He did this consistently throughout his life."

Michael Foley spoke of how, as the oldest of five siblings, Jim was always teaching them, "whether or not we were willing to learn."

"Jim wasn't done teaching, and he isn't today," he said. "I'll never make complete sense on why Jim died, but I don't think that's for me to understand."

"His final lesson came in the form of his act of martyrdom," Michael Foley said. "Jim died for his faith. He died because he was American. He represented the core values we stand for. He died so others may live."

"Jimmy, I know you are with us," Rita Colina said. "Don't worry -- we'll take good care of your Mom and Dad, and Grammy. I love you and miss you."

"Today was a great tribute to Jim," Father Paul Gousse, pastor of Our Lady of the Holy Rosary said, "but not only a great tribute, it was a consolation for the family."

"If I had to stand here and I had to say what was the most important lesson Jim taught, it was at the end of his life," he continued. "He taught us the meaning of life by being willing to lay down his own life for others."