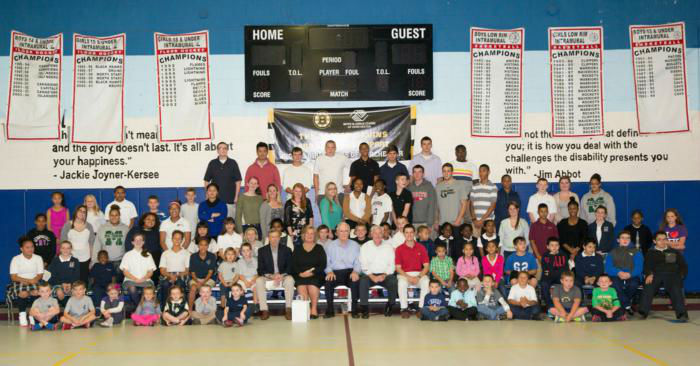 The 2014 recipients of the Daniel F. Marr, Jr. Scholarship are pictured at the award ceremony at the Boys and Girls Clubs of Dorchester last month. Pilot photo/George Martell, BCDS

At a scholarship awards ceremony held in September at the Boys and Girls Clubs of Dorchester, Robert L. Marr said, "Establishing the Marr scholarships in memory of my brother, Dan, was by far the best thing we've ever done at the Boys and Girls Club. Studies confirm what we know to be true -- that a Catholic education provides tremendous benefits for students, especially those growing up in urban areas. The results of this program have been phenomenal, and it makes me very proud to know that these students are changing the face of Catholic education."

Students receiving scholarships are chosen by the Boys and Girls Clubs of Dorchester, and the awards are distributed directly to their schools.

Pat Bartram, executive director of the Catholic Community Fund said that these scholarships are "a wonderful support for these students and their families and our Catholic schools. On average, our schools charge tuition of about 75 percent of the actual cost to educate a child. At the same time, coming up with several thousand dollars for tuition every year -- and more for families who send more than one child -- is a lot for families. We are so grateful to the late Mr. Marr, Bob Marr, and the entire Marr family for their generosity which is helping to make Catholic education possible for so many."