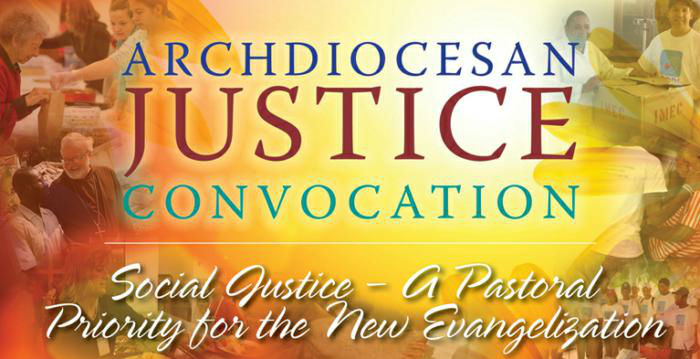 BRAINTREE -- Organizers of the sixth annual Archdiocesan Justice Convocation hope to echo the commitment of Pope Francis to Catholic teachings on social justice, as they gather at the Pastoral Center on Oct. 25.

Prayer, talks and panel discussions at the convocation will center on the theme "Social Justice -- a Pastoral Priority for the New Evangelization," with Father J. Bryan Hehir, Cabinet Secretary for Health and Social Services, delivering the keynote address.

He said gathering those interested in social justice is key in the context of the convocation.

"It's important, because you don't want the social justice ministry of the Church to be seen as a specialty relegated to a few people," he said.

Father Hehir said social justice themes from Pope Francis's apostolic exhortation, "Evangelii Gaudium" ("The Joy of the Gospel") tie in to the broader ministry of the Holy Father, as a social justice component takes a more central role in the life of the Church through the teachings of Pope Francis.

"I will be dealing with some of these themes in his life, how you connect this particular letter to these larger themes," Father Hehir said.

Patricia M. Dinneen, chair of Archdiocesan Pastoral Council Social Justice Committee, will moderate the discussion, which will also address best practices on social justice initiatives, and how churches in collaborative ministry can incorporate social justice in their individual pastoral plans.

"The most important target for the social ministry is the parish, is how you get this down to the parish. The Church has got to deal with it in broad theme -- the pope speaking to the world, the national conference of bishops speaking to the country, the Massachusetts bishops speaking, BC, Regis and other colleges speaking. You want all of that done, but if you leave out the parish, you leave out the place where probably 80 to 90 percent of the Church will either be touched by this or won't," Father Hehir said.

The second panel, moderated by Deacon Daniel Burns, director of the Office of Permanent Diaconate Formation, will focus on interfaith community outreach to overcome violence.

To discuss examples of successful interfaith activities, beliefs and teachings of different religious groups on overcoming violence, and specific suggestions for what the faith community can do in the future, organizers have assembled local Catholic experts on interfaith and ecumenical dialogue and other Christians.

"The African American churches, the African American community, the so-called Black church, has been at the heart of this question of urban violence for years and years, so you want their wisdom. You want to show that we want to cooperate with them, as we work together," Father Hehir said.

The convocation will end with a Mass celebrated by Cardinal Seán P. O'Malley, with music provided by Meyer Chambers and the Archdiocesan Black Catholic Choir.

"Historically in this country, there has been a very tight link between the liturgy and the social ministry of the Church. Some of the great voices in social justice in this country were also people who were deeply involved in the liturgy."

"That's a tradition of the Church, so you would want a social justice conference to end with the Eucharist -- our most important prayer," he said.

Exhibitors at the convocation will include Daughters of St. Paul Publications, Jesuit Refugee Services, Project Rachel and the Pro-Life Office, Theological Institute of the New Evangelization, Masters of Arts in Ministry Program, and the CatholicTV Network.

Registration for the event can be done at constantcontact.com for $20. For more information, contact Ann Cussen, Office of Spiritual Life, at 617-779-3644 or spiritual_development@rcab.org.