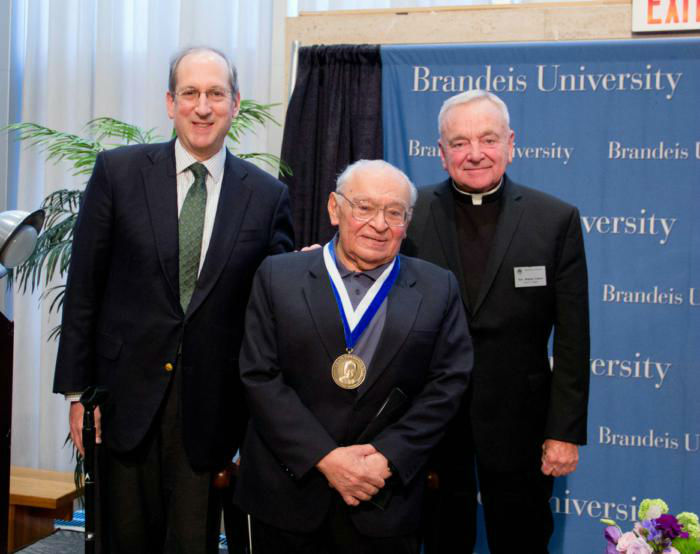 WALTHAM -- Brandeis University honored Father Gustavo Gutierrez, Oct. 5, with the Joseph B. and Toby Gittler Prize for his dedicated advocacy on behalf of the poor in Latin America and his commitment to Catholic social justice.

Father Gutierrez, a Dominican friar, wrote "A Theology of Liberation: History, Politics, and Salvation" in 1973. The book became the foundation, and set up the Peruvian theologian to become known as the founder, of what would come to be called liberation theology.

Born in Lima, Peru in 1928, Father Gutierrez studied medicine at the National University of Peru before he studied theology. He studied philosophy and psychology at Leuven in Belgium, and was ordained in 1959. He earned his doctorate in theology at Catholic University of Lyon in 1985.

Currently the John Cardinal O'Hara Professor of Theology at the University of Notre Dame, Father Gutierrez became an educator with more than 12 published works. He attended the Conference of Latin American Bishops in 1968, and wrote a paper the following year that formed the basis for his book in 1973.

Students, faculty and staff from Brandeis, students from other colleges, some from as far away as Canada, attended the award presentation and talk.

The Gittler prize, created in 1948, honors the recipient for scholarly contributions that forward racial, ethnic, or religious relations in the world. Hosted by the International Center for Ethics, Justice and Public Life on behalf of Brandeis' Office of the President, the prize includes $25,000 and a medal.

In his talk, Father Gutierrez gave a working definition of theology and his specific theology, outlined the reality of poverty in the modern world, and defined the consequences of that reality.

He called theology "a language," and said such a language must define things based on observations made with a kind of scientific mindset -- observing reality for what it is and moving from there.

"In order to communicate the Gospel, we need to know the situation of the people," he said.

However, in the context of increased globalization, he said the consequences of poverty are not just real, but deadly -- with 800,000 dying from hunger per year according to the United Nations. Yet, he said, a blanket opposition to globalization would be preposterous, saying it would be like being opposed to the use of electric energy.

He emphasized that complex realities change power structures and institutions that impact the poor, but many feel society has moved beyond them.

"People today love to be 'post,'" he said, noting that many people often describe society as post-industrial, post-capitalism, or post-socialism.

He called it an inaccurate exaggeration to dismiss specific evils as no longer present.

He explained "the preferential option for the poor," a key concept of liberation theology, as a biblical expression of God's universal love with a special focus on the poor and the suffering.

He said the idea existed in Christianity before it was defined in those terms.

"The sentence is new, that idea new, but in some ways the content is very old," he said.

"For me, to do theology is to write a letter, a love letter, to God -- the God of my faith, to my people, and to my Church. It's a love letter I cannot repeat in the same terms, but the expression of love is there," he said.

He said he hoped "the letter" invited those who read it to deepen their faith.

A Harvard student currently working on his own social justice campaign in Boston spoke with The Pilot after the talk and presentation.

Pedro Morales, a local organizer and strategist for Stand for Democracy -- a grassroots effort aimed at overturning casino laws they see as predatory towards the poor -- said Father Gutierrez had been an inspiration throughout his life. Morales said the tenets of liberation theology practiced by priests and women religious saved his life when they took him in from the streets of Juarez, Mexico, where he grew up.

"To me he has always continued to be an inspiration of how to view the world through these lenses. It took me awhile to understand, but I think I do understand very clearly now," Morales said.

One student who came to the talk traveled to Brandeis from the University of Toronto, as soon as he found out about the event.

"I just had to make plans right away," said Benjamin Lujan, who is writing his doctoral dissertation on the preferential option for the poor.

Father Walter Cuenin, the Catholic chaplain and coordinator of Multifaith Chaplaincy at Brandeis, said he remembered the initial stages of liberation theology taking root in 1971, a year after his ordination.

"Liberation theology was a call to the Church itself to reform itself and be more sensitive to the needs of the people, because in reality the Church was usually on the side of the royalty or the rich," he said.

As much as Father Gutierrez called the advocacy for the poor an old idea, some saw it as a new iteration of Marxism, according to Father Cuenin. Father Cuenin compared that to the change in tone set by Pope Francis as he leads a more humble life than many associate with the office of the papacy.