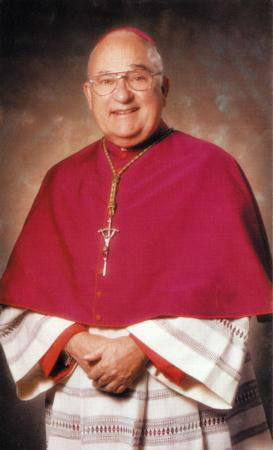 In an Oct. 9 statement, Cardinal Sean P. O'Malley said, "Over the course of nearly 60 years of priesthood and 22 years of service as a bishop, Bishop Boles was a beacon of warmth to all who met him as he showed pastoral care and concern for the Catholic faithful and the wider community. He brought a sense of joy, kindness and fidelity to the Church that inspired us and provided an example for others to follow.

"Please join me in praying for Bishop Boles as we give thanks to God for the blessing of his life and ministry. We extend our heartfelt condolences to Bishop Boles' family and friends, his fellow bishops and priests, and all who mourn his passing. May his soul and all the souls of the faithfully departed rest in peace," the cardinal continued.

On Oct. 12, 2006, Pope Emeritus Benedict XVI had accepted the resignation of Bishop Boles, which he had earlier offered to the Holy Father. With that announcement Bishop Boles ended his more than 14 years as auxiliary of the archdiocese. At that time, Cardinal O'Malley announced that effective Dec. 29, 2006, Bishop Boles would become a "Senior Bishop" and would enjoy a well-deserved respite from his administrative responsibilities as Regional Bishop of the Central Region of the archdiocese.

Education had been one of the premier interests and concerns of Bishop Boles since his ordination to the priesthood in 1955. Bishop Boles has been a faithful and good pastor to many in the education community of the archdiocese. Over the years, his responsibilities varied from classroom to administration. While auxiliary bishop his time directly involved with education had been mixed in with his many responsibilities in that office. All who know him readily confess his wide interests and genuine concern for the educational ministry of the Church.

John Patrick Boles was born in Boston on Jan. 21, 1930, a son of the now closed Our Lady of Presentation Parish in the Boston neighborhood of Brighton. He is an alumnus of St. Sebastian School and archdiocesan seminaries. Archbishop Richard Cushing ordained him to the priesthood on Feb. 2, 1955 at Holy Cross Cathedral and he was assigned as an assistant at St. Edward the Confessor Parish in Medfield.

In 1957 he received the first a series of appointments that would solidify his involvement, interest and concern for Catholic education. He was appointed to the faculty of his alma mater, St. Sebastian School, and lived, initially in residence at St. Mary of the Assumption rectory in Brookline. In 1962, he moved into the residence of St. Sebastian and remained a faculty member. In 1966 he was named headmaster of his alma mater, a school which Cardinal O'Connell had founded for young Catholic men.

Father Boles continued his own education obtaining advanced degrees in education, and counseling and guidance from Boston College.

In 1972 he was named Director of Education for the archdiocese and moved his residence to Pope St. John XXIII Seminary in Weston.

During his years of education leadership he saw many changes, including the closing of a number of schools due to the refocusing of the missions and the declining numbers of women religious staffing the schools in the early 70s. At the same time the educational mission expanded with developing parish religious education programs and widening responsibilities for campus ministers on college and university campuses. In 1974, Father Boles took a new challenge when he was appointed pastor of St. Paul Parish, Cambridge which included also the responsibility for the campus ministry at the Harvard-Radcliff Catholic Student Center.

During his years in the parish, he was called upon to assist the archdiocese as a member of the Clergy Personnel Board (1987-1992) and as vicar of Vicariate IV of the Central Region in those same years.

While he served as bishop of the Central Region and had a special responsibility for the parishes there, he was also a familiar face across the archdiocese as he celebrated the sacraments, especially confirmation, and attended celebrations in the lives of priests and people with whom he had been friendly over the years.

Even in his retirement, he continued to make himself available to assist Cardinal O'Malley in various aspects of archdiocesan life.

During his retirement, Bishop Boles moved from Dorchester to Brookline, returning to residence at St. Mary of the Assumption rectory. Later he moved to the Regina Cleri the archdiocesan residence for senior priests in Boston's West End.

Earlier this year, following a decline in his health he had to move to St. Patrick Manor where he was cared for by the Carmelite Sisters of the Aged and Infirm.

The arrangements for Bishop Boles wake and funeral are still being finalized and will be announced as soon as details are available.