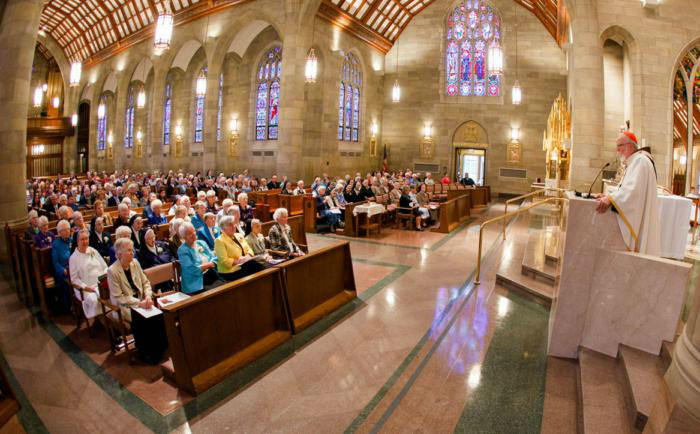 'Then, in the afternoon I celebrated the Mass for women religious jubilarians in the archdiocese at St. Theresa church in West Roxbury.' Pilot photo/CardinalSeansBlog.org

Saturday afternoon (9/20) I was invited to visit the Quincy Catholic collaborative. The collaborative was having a parish carnival and several of the booths represented different ministries in the parish, such as the adoration society, the Chinese apostolate and others. Of course there were also many rides and games and I met a clown there. Things seem to be going very well in the collaborative. I am pleased that they have begun outreach to the Chinese community of Quincy, which is an important demographic there.

Then, in the afternoon I celebrated the Mass for women religious jubilarians in the archdiocese at St. Theresa church in West Roxbury. Each year Monsignor Helmick and the people of St. Theresa's are always very gracious in hosting the Mass. A number of our auxiliary bishops and priests were in attendance along with the families and friends of the sisters. Sister Marian Batho, of course, is very much involved in organizing this Mass. Each year one of the jubilarians offers brief remarks. This year Sister Dorothea Masuret gave us a beautiful reflection about her experience of religious life.

Monday (9/22) I went to St. Elizabeth's hospital to mark the centennial of the hospital's current location. The institution itself is actually older. It was originally founded in the time of Archbishop Williams but in 1914 Cardinal O'Connell relocated the hospital to the Brighton site. We are very pleased that St. Elizabeth's still retains its Catholic identity. It remains committed to abiding by the US bishops directives and provides ongoing formation to the hospital staff while continues with the same commitment to serving the poor and needy of the community. We were joined at the Mass by our chief ethicist Peter Cataldo, Ralph de la Torre, CEO of Steward Health Care and the current president, Kevin Hannifan. A number of priests and sisters joined us for the Mass including Father Salamone who is the chaplain there. The Mass was celebrated in the chapel which was renovated about a year ago. I was very pleased to learn that, even if they could not join us, the patients throughout the hospital could watch it on closed-circuit television.

On Tuesday (9/23) I attended a meeting of the board of the Catholic University of America. We had a meeting for the renewal of the president's contract. We are very pleased the board of directors has offered President Garvey another five-year contract. I think that he has been a very positive influence in the life of the university.

Wednesday morning (9/23) I was very pleased to attend the installation of the new Bishop of Fall River Edgar Moreira da Cunha. As I mentioned to the people attending the installation, 21 years ago I was installed in that same cathedral. Archbishop Cronin, who was my predecessor there was also present, along with Bishop George Coleman. Bishop da Cunha gave a very lovely homily that was both in English and in Portuguese. Of course, Fall River is probably one of the dioceses with the largest percentage of Portuguese speakers. So, it is a blessing to have someone from a Portuguese speaking country as bishop there.