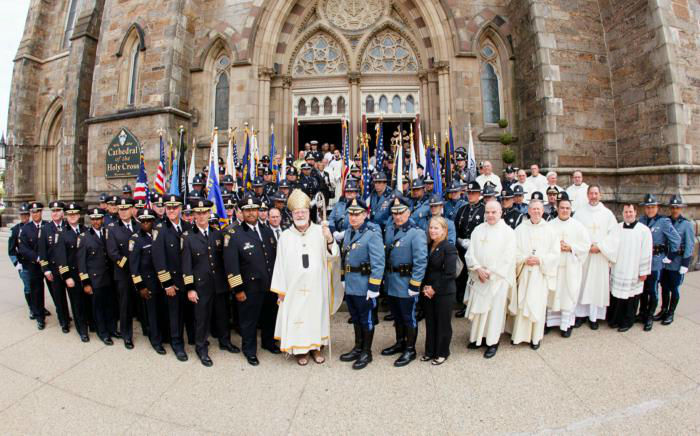 SOUTH END -- Bagpipes flared and drums beat as law enforcement and emergency personnel led the procession into the Cathedral of the Holy Cross, Sept. 21, for the first Mass for Public Safety Personnel and Families held in 13 years to honor those who serve, especially those fallen in the line of duty.

Boston Firefighters of the Ladder 17 crew and the Ladder 29 crew hoisted an American flag over a quartet of mounted officers facing the doors of the cathedral. Beneath the multi-story flag, a contingent of color guard bearing flags and ceremonial rifles processed into the cathedral to a tune set by Boston Police Gaelic Column of Pipes and Drums.

The Mass follows a tradition of celebrating what is sometimes called a "Blue Mass" for emergency personnel. Such Masses were celebrated for many years in the Archdiocese of Boston with differing titles, "the Public Safety Mass" or "the Red and Blue Mass" for fire and police.

The Gospel reading at the Mass presented the parable of the Good Samaritan.

"The Good Samaritan is compassionate, and he is courageous. These are the same qualities that we want to restore in this Blue Mass. They represent the idealism of service that you give to our community," the cardinal said.

He said the work of public safety personnel builds up the framework of a stable community.

"I always say that the Gospels are very clear in delineating the differences between the crowd -- a collection of selfish individuals, indifferent to each other, who tend to push people away from God -- and the community -- that recognizes the responsibility that we have to care for each other," he said.

Cardinal O'Malley noted that the Good Samaritan of the Gospel of Luke would have been considered a heretic or an outcast at the time when Jesus taught, but he still came forward to help someone in a time of need when no one else would.

"In today's world, were people have grown so individualistic and alienated from each other, it's important to realize that acts of compassion, and mercy, and love, like acts of violence and selfishness, have a ripple effect and profoundly alter human ecology," he said.

The cardinal also noted the importance of prayer and coming together in faith for those in public service. He said to do this requires a vision of humanity through God's eyes, where everyone is loved and valued.

"If we do not pray, that vision will fade and we will become part of the crowd rather than part of the community," he said.

The cardinal commended those present for answering the call of the parable, to treat others with compassion and love that he said transforms even enemies into neighbors.

"Your profession invites you to be like the protagonist in the Parable of the Good Samaritan, running toward danger, putting yourselves in harm's way to serve someone you do not know perhaps, but who is never a stranger, but rather is always a neighbor. You are there to take care of the victim, the wounded, and at the same time you are making the road to Jericho, the road of life, a safer place -- a community," he said.

Prayer intentions at the Mass focused on safety for those still serving and blessings for those fallen in service to their communities.

Joan Walsh, mother of fallen Boston firefighter Lt. Edward J. Walsh Jr., carried the gifts to the altar during the Liturgy of the Eucharist.

Outside the cathedral after the Mass, Cardinal O'Malley spent about half an hour greeting the first responders and their families and posing for pictures alongside police color guard details including those from Boston, Woburn, Cambridge and the Massachusetts State Police.

"To come here to the cathedral and have law enforcement officers prayed over is very humbling, and we're very appreciative of it, especially for our officers that have gone on before us, whether it's through the line of duty and service, or through injuries," BPD Superintendent-in-Chief William G. Gross told The Pilot.

Father Richard Deshaies, Middlesex Sheriff's Department chaplain, played a key role in the revival of the public safety Mass. He said Sheriff Peter Koutoujian asked the cardinal to revive the Mass for public safety personnel at a visit Cardinal O'Malley took to Cambridge Jail two years ago. Shortly thereafter, the archdiocese formed a steering committee to plan the event.

"That began the long odyssey of bringing this to fruition today. It took us two years. It was hard to keep the flame alive, but once we met with our steering committee we had complete buy-in by everyone involved, Deacon Jim Greer became the head of that steering committee, and here we are today celebrating all the fruits of that cooperation," Father Deshaies said.

"They are being recognized for the important work they do, their contribution to the community, to keep our community safe," he said.

Organizers said they hope for greater attendance and participation in the Mass next year.

Father Robert E. Casey, Assistant Catholic Chaplain for the Boston Fire Department, said the Mass presented a great opportunity to recognize the service and sacrifice of those who serve protecting the public as firefighters, police, corrections, and emergency medical service personnel.

"First of all, it's a day for us to give gratitude for their service to us. They're out there 24 hours a day protecting us, and watching over us, and caring for us," he said.

He said prayer for the families means a lot to those who lost loved ones in the line of duty.

"But also, it's a time for us to remember those who have passed away this past year. We encourage their families to come to this celebration," Father Casey said.