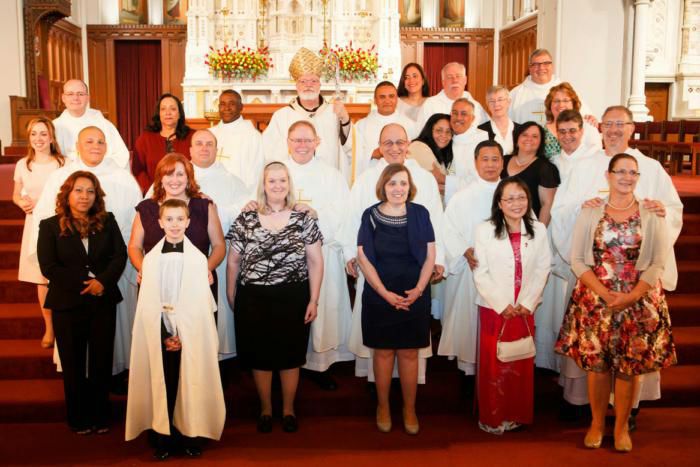 SOUTH END -- As he ordained 13 new permanent deacons at the Cathedral of the Holy Cross, Sept. 20, Cardinal Seán P. O'Malley recounted the history of the diaconate and his appreciation for their ministry.

"In every diocese where I have worked, the presence of the dedicated permanent deacons has been such a great blessing. And so, it is truly a joy and a privilege to gather here for this ordination," Cardinal O'Malley said.

In his homily, the cardinal spoke about the restoration of the permanent diaconate through the Second Vatican Council. In 1971 the first class of permanent deacons in the United States received ordination. The first Boston deacons were ordained in 1976, with new classes being ordained every two years. In 2011, the archdiocese began ordaining permanent deacons annually.

The cardinal thanked those who helped the deacons in their formation, especially their wives and families.

The deacon, from the Greek "diakonos," meaning servant or minister, is the first of three ranks of ordained ministry in the Church. Among the many functions they perform in parishes, deacons may preside at baptisms, weddings and rites of Christian burial, assist the priest at Mass, proclaim the Gospel and deliver homilies. In addition to a parish assignment, each of the new deacons will also assist in one of the offices or ministries of the archdiocese.

The Rite of Ordination to the Order of Deacon began during the Liturgy of the Word. After the Gospel reading, the men to be ordained were called forward and elected by the cardinal.

Cardinal O'Malley then delivered his homily, followed by an examination of each man in a series of questions. The men promised respect and obedience to the cardinal and his successors, to show their future and present loyalty to the bishop as leader of the archdiocese.

To signify humble submission before God, the men lay prostrate in the sanctuary while the assembly sang the Litany of Saints.

The deacons then received a stole and dalmatic -- which signifies the office of diaconate and the deacon's role in the celebration of the Eucharist -- brought up by each of the men's wives before a priest or deacon vested the men. Next, the deacons were presented with the Book of the Gospels.

The Rite of Ordination concluded with the kiss of peace.

The deacons' wives brought the gifts to the altar, and the Mass continued with the newly ordained deacons standing at the altar for the first time.

For Deacon Tam Tran the rite concluded a faith journey that brought him from Vietnam, where he lived much of his life as a Buddhist, to this country where he met his wife Thom and began to accept Jesus Christ into his heart. The couple married in 1976, but Tam Tran did not convert to his wife's Catholic faith immediately.

"After getting married, I did not convert, but my wife prayed for 22 years before I converted to being Catholic," he said.

For Tran, who holds degrees in chemical and nuclear engineering, the process required not only the prayers and patience of the woman he loved and something else as well.

"I am a scientist, so if I want to do something, I need proof," he said.

"I have many, many things that happened to me during the time before my conversion that I can't explain scientifically, but that happened. That is why I am convinced that this is the truth," he said.

Despite living a healthy lifestyle -- Tran holds two black belts in martial arts styles he practices regularly -- a heart condition brought him to the brink of death in 2008. The experience brought him deeper into his faith.

"I was unconscious for five days, and I saw the light. So, when I woke up I said this life is kind of temporary. It's not permanent. I can't take anything with me, so why don't I just do something for God?" he said.

Tran called his wife a saint for her patience and kindness during the process of his conversion and call to the diaconate. Thom said she merely provided him support over time, and that she will continue to support him.

Deacon Michael Curren and his wife Paula are members of St. Agnes Parish in Reading. He will now serve at St. Augustine Parish in Andover and the Office of Ecumenical Affairs. He spoke about the ordination as a culmination of five years of formation.

"It's been a joy. It's emotionally moving, but we know there is something moving in us that isn't what we're doing. It's something that God is doing. We are a pencil in God's hand as Mother Teresa would say," Curren said.