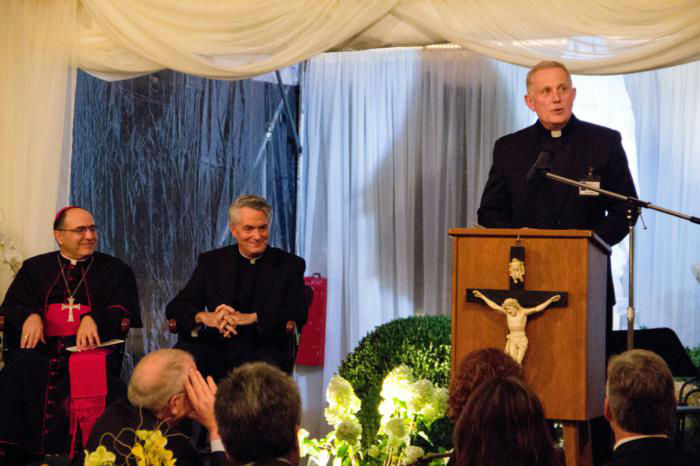 "It's hard to believe it's been 50 years, a half-century, since Richard Cardinal Cushing not only foresaw the need for delayed vocations but then acted upon it. It's that vision that brought Pope St. John XXIII National Seminary to Weston and all of you here tonight," rector Father William Palardy told guests.

Seminary staff said the Lawn Party raised around $250,000 which will go toward operational needs and support of seminarians -- a current total of 66 seminarians, near capacity for housing.

Lawn Party Chair Scott A. Gieselman and Father Palardy announced the launching of the public phase of the capital campaign "Pathway to the Future," which has already raised $6.6 million for infrastructure, endowment, and construction. The campaign aims to reach $9 million by spring to start construction of a new learning center, to include a new library, and make space for 12 new rooms for seminarians.

"For the record, as rector number eight, I can assure you I don't want to be remembered as the rector who ran out of rooms and had to turn potential seminarians away, so I need your support to prevent that from happening," Father Palardy said.

In his remarks, Father Palardy also recalled two people with deep connections to the seminary who had passed away in the last year.

Father Tom Schmitt, a teacher and dean of seminarians, passed away in August of esophageal cancer. Father Palardy described him as a lover of nature and said that, "there wasn't a plant, a bird, or a star in the heavens that he couldn't identify." The large glass wall planned to overlook the forest and the Stations of the Cross outside the seminary will be named in his honor.

He also noted the passing of Jack Shaughnessy, a longtime benefactor of many causes central to the mission of the Archdiocese of Boston, including the seminary. He said Shaughnessy had frequently worn a cap marked "XXIII" at public events, prompting people to ask if he attended Super Bowl XXIII.

"But, Jack of course would respond, "No, but let me tell you all about John XXIII Seminary," Father Palardy said.

The main floor of the new center, Father Palardy announced, was to be named "The Mary and Jack Shaughnessy Pavilion."

When it was established in 1964, the idea of creating a seminary for the formation of men over age 30 in the United States was revolutionary. At the time, only one such seminary existed in the world, the Pontifical Beda Seminary in Rome.

Since its founding, the seminary has formed almost 700 men, from more than 140 dioceses and 21 religious orders, for ordination. As part of the Lawn Party's tradition, guests hear current seminarians speak about how God has inspired them to their own "second-career" vocation.

Speaking this year was Class of 2016 seminarian Jorge V. Rocha, 39, studying for the Diocese of Providence.

He told the audience that he lost his parents at a young age, and later his grandparents.

"I felt I had every right to be upset with God," he said.

Rocha said searching his feelings he instead found gratitude for the care and support of his family.

The native of Cape Verde moved to the U.S. at age 11 where his uncle raised him. The Dominican Friars he met while studying at Providence College helped him identify his calling. His three older sisters also encouraged his call to the priesthood.

He said also, "I have no doubt that my mom, and the Blessed Mother, have been with me throughout this time."

Deacon Jim Cardosi, 59, a fourth-year seminarian studying for the Archdiocese of Philadelphia, told the audience he had served as a Navy pilot for 28 years, while his wife Cindy cared for their five children. He said her strength as a wife and a mother gave the impression she could do anything. But in 2002 she was stricken with a terminal illness.

"In my mind there was just no way this girl could be beset by serious illness. She was Superwoman," he said.

He said as God and the people around him helped him overcome despair and depression, and helped him see caring for his wife during her illness as a blessing. He cared for her until her death at their home in 2008.

He visited the seminary two years later, in 2010.

"I left knowing that once again I had been blessed by God. You see, the folks here, everyone, gets the idea of delayed vocations, and they have a program in place that will support Holy Mother Church with good priests for many, many years. Pope St. John produces good priests, because they are staffed with good priests," he said.

Bishop Peter J. Uglietto, vicar general and moderator of the curia for the Archdiocese of Boston, offered support for the seminary on behalf of Cardinal Seán P. O'Malley.

"Tonight, in a way, is very much like the founding back in 1964. In fact, one might describe this evening as another beginning, or second founding. It is a second founding because you and I are now being asked to lay the foundation for the next 50 years," he said.

Carole Crino, a parishioner of St. Theresa in Sherborn, attended the Lawn Party with her daughter Cynthia Crino. Each woman had donated recently.

"There is an air of true Christian charity, love and brotherhood here that I can't describe, but I know it and I feel it," Carole Crino said.

Cynthia Crino noted the value of experience men from Pope St. John XXIII bring to their ministry because of experiences with work, family and life before ordination.

"They have been in the office, they have had children, they have had a whole life behind them that they can bring and enrich their parishioners with," Cynthia Crino said.