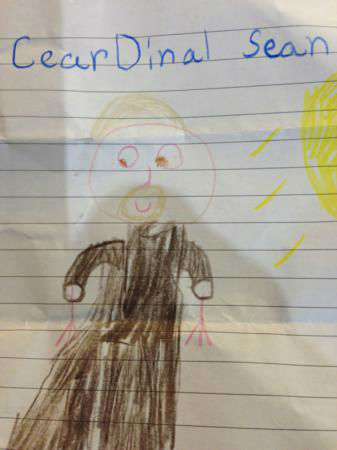 'While in Rome I also had a chance to see my old friends Sean and Gina Kennedy and their son, Declan... Declan made this wonderful portrait of me. I think it is a remarkable resemblance!' Pilot photo/CardinalSeansBlog,org

I have spent much of this week in Rome for meetings with the Holy Father and the group of cardinals advising him. He was with us for all the meetings except for Wednesday morning, when he always gives his weekly audience. In our previous meetings, we have spent much of our time addressing issues surrounding the economic offices of the Holy See, as well as reviewing the various congregations and pontifical councils. With this meeting we continued to look at the different dicasteries, and the way they fulfill their mission in the context of the challenges we face in the areas of family life and social justice. We also began working on the new Constitution that will reform the Roman Curia. We are hoping to offer the Holy Father a text early next year to allow him time get wider further input as he prepares the final document.

Before I left we had a farewell gathering for Mary Moran, who did a wonderful job as our interim superintendent of Catholic schools. Her tenure is ending now that our new superintendent, Kathy Mears is beginning her duties so we wanted to thank Mary for all the wonderful work she has done.

After I arrived in Rome, I was invited for lunch with the prelate of Opus Dei, Bishop Javier Echevarria. The lunch gave us an opportunity to speak about the hopeful future saint Father Joseph Muzquiz, whose cause has been introduced. He is buried in Boston and our tribunal has been working on the cause. Father Muzquiz was one of the very first members of Opus Dei to come to Boston, along with a good friend of mine, Father Sal Ferigle. Still today, the members of Opus Dei make a very positive contribution to the Church in the Archdiocese of Boston through their work with the university students, their very active retreat house, and the participation of many of their members in the different ministries and apostolates of the archdiocese.

While in Rome I also had a chance to see my old friends Sean and Gina Kennedy and their son, Declan. Sean was a lay missionary in the Pacific and Alaska before he came to work with us when I was bishop in the West Indies. He was with us for two years and helped us to open a shelter for the homeless which we called Bethlehem House, because in Bethlehem the Holy Family was homeless. After finishing his time in the West Indies he got engaged and he returned to West Indies for his wedding, which we had at the Cathedral in St. Thomas. Many years later, he got a job in Rome working for the U.N. Food and Agriculture Organization, better known as FAO. Declan was born here in Rome and, in fact, his baptism was the first I ever celebrated in St. Peter's Basilica and one of the first events I talked about in my blog. Declan made this wonderful portrait of me. I think it is a remarkable resemblance!

While in Rome I had a dinner with two of our three seminarians studying in Rome, Kevin Leaver and Michael Zimmerman. Our other seminarian, Kevin Staley-Joyce, was on retreat and so he was not able to join us.