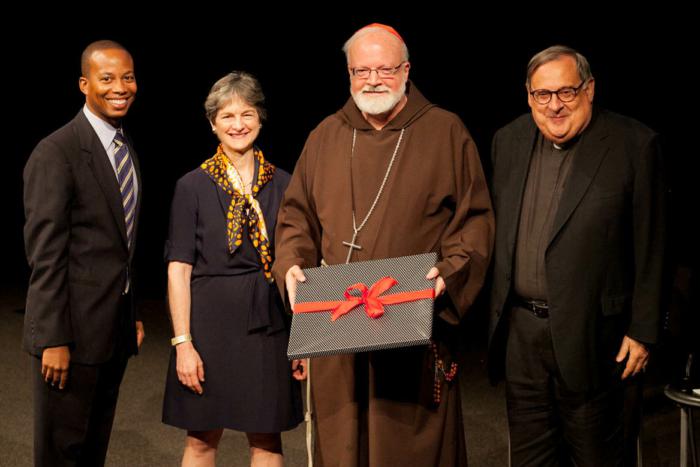 'The John Carroll Society of the Archdiocese of Washington hosts an annual Fall Lecture, which was held at the Newseum on Tuesday (9/9). This year I was asked to give the keynote talk on Pope Francis and The New Evangelization.' Pilot photo/CardinalSeansBlog.org

We are very pleased that Msgr. Robert Oliver was appointed this week as Secretary of the Pontifical Commission for the Protection of Minors. This is a very important step forward in the organization of the office and the work of the commission. Monsignor has been working as Promoter of Justice of the Congregation for the Doctrine of the Faith and is very well-versed in the issues surrounding child protection. He has been supporting the commission very actively on a volunteer basis, so we are very glad that he has officially been given this responsibility by the Holy Father.

I am on the board of the Catholic Leadership Institute and so, Friday (9/5), CLI President Matt Manion, and vice president Dan Cellucci visited me to give me an update on some of the organization's recent activities. CLI has been a very valuable help to our archdiocese, with the Good Leaders, Good Shepherds program, training our parish staffs and leadership as well as promoting best practices in evangelization and parish leadership.

That evening at the cathedral, I hosted one of my regular dinners for seminarians. This time, I met with the seminarians in their fourth year of theology -- these are the men who will be ordained transitional deacons in a few months. As always, we began with Vespers and afterwards we had a very nice discussion. It gave the seminarians a chance to share a bit about their summer experiences.

On Saturday (9/6) I left for Washington, D.C. to attend the regular September meetings of the U.S. Conference of Catholic Bishops' Committee on Pro-Life Activities and the Administrative Board. At the meeting of the Pro-Life Committee we heard a report on the ongoing collaboration between the Archdiocese of Washington and the national office of the post-abortion healing ministry, Project Rachel. About 50 dioceses have been trained, and our own Marianne Luthin is very much involved in that. During the meeting we learned that the national website of Project Rachel, HopeAfterAbortion.com, is receiving about 40,000 visits a month, which shows that the outreach is working but also how much need there is for healing after abortion.

The John Carroll Society of the Archdiocese of Washington hosts an annual Fall Lecture, which was held at the Newseum on Tuesday (9/9). This year I was asked to give the keynote talk on "Pope Francis and The New Evangelization." There were over 500 people in attendance, which I think indicates the great interest people have in the topic of the Holy Father and his message.

The director of the Society is Msgr. Peter Vaghi, whom I have known since he was a young lawyer who had not yet entered the seminary. He has been working with the John Carroll Society for almost 30 years. The Society has as its roots in the Red Mass planning committee, but over the years it has grown into a wonderful instrument of ongoing formation for professionals in Washington, as well as a means of channeling pro-bono services to the poor and the needy. They have done an extraordinary job, so I was very happy to lend my support to their event.

We are very happy this week to note that our archdiocesan newspaper, The Pilot, has just recently marked its 185th anniversary. We are very proud of our newspaper, which was founded by Bishop Fenwick in 1829 and is among the oldest newspapers in New England and is certainly the oldest Catholic newspaper in the United States. Of course, one of its most notable early editors was the famous Irish author and poet John Boyle O'Reilly who was a "POME" (Prisoner of Mother England) who escaped the penal colony in Australia and made his way to Boston and went on to lead The Pilot to glory!