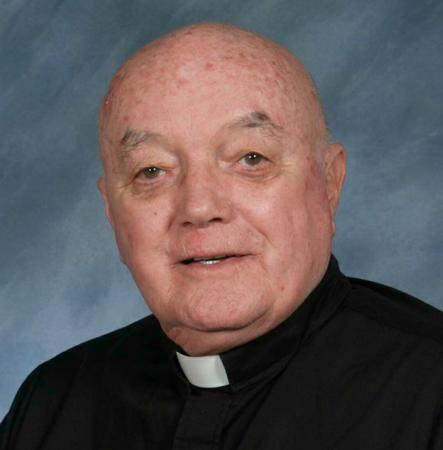 For the second time in as many months, St. Joseph Parish, Medford gathered for the Funeral Mass of one of its priest sons. Father John M. Toomey, known among his friends as "Jack" died on Sept. 6 at Regina Cleri Residence in Boston's West End.

A son of the late Michael and Esther (Scanlon) Toomey, he was born in Malden on June 3, 1935. Jack was an alumnus of Malden Catholic High School and archdiocesan seminaries. Richard Cardinal Cushing ordained him at the Cathedral of the Holy Cross on Feb. 2, 1961.

During his 40 years of active priestly ministry, he was assigned to parishes and educational institutions. His first assignment was as an assistant at St. Patrick, Stoneham; in the academic years 1965-167 he pursued graduate studies at The Catholic University of America in Washington, D.C. and the International Center for Catechetics, in London, Ontario, Canada. He served a one year assignment as a consultant in the Archdiocesan Religious Education office, while living at St. Mark, Dorchester.

He was assistant at St. Susanna in Dedham from 1968-1970; and then began a five year teaching position at Boston College, living in residence at St. Anthony of Padua, Allston and St. Bernard, Newton. During these years, he was also chaplain at Newton College of the Sacred Heart, Newton and Emmanuel College, Boston. From 1975 to 1982 he was an associate at St. Mary Star of the Sea, East Boston; St. Theresa of Lisieux, Billerica; St. Jerome, Arlington; and Sacred Heart, Watertown.

From 1982 to 1999 he was professor at Laboure College in Dorchester, and he was concurrently parochial vicar in Sacred Heart, Watertown; St. Joseph, Hyde Park and Resurrection, Hingham.

In July 2000, he was granted senior priest/retirement status and initially lived in his own residence, in 2008 he moved to Regina Cleri.

Father Richard Mehm, pastor of Immaculate Conception in Malden said "the people here liked him very much; when I first arrived some years ago he was a great help with both Sunday and weekday Masses."

Father Toomey's Funeral Mass was celebrated on Sept. 11 at St. Joseph, Medford. At his request the principal celebrant was to be Father Robert W. Thomas and the homilist was Father Patrick J. McLaughlin, who was returning to preach at this funeral as he had just about a month ago at the Funeral Mass of Father Lawrence Drennan. Merrimack Regional Bishop Robert Hennessey was present at the Mass and celebrated the Final Commendation.