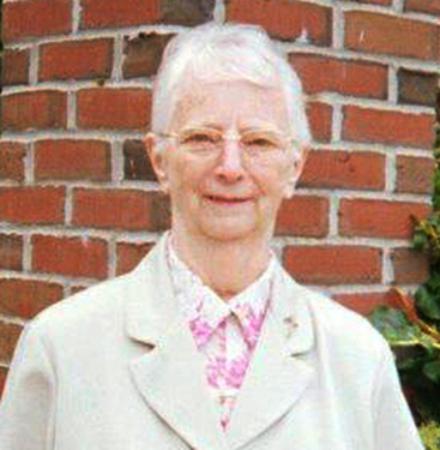 After discernment and sharing with each other and with Congregational Leader Sister Jacqueline St. Yves, SGM, the Sisters of Charity of Montreal (more widely known as the "Grey Nuns") are happy to announce that Sister Jeanne Poor, SGM has been appointed Coordinator for the sisters of St. Joseph Area, for a three year mandate effective Aug. 15, 2014. This is a second call to leadership for Sister Jeanne, who previously had a very fruitful double mandate in that position from 2001 to 2008.

The Grey Nuns gathered in the chapel at Youville Place Assisted Living Residence in Lexington, where the Grey Nuns Offices are located, for the Missioning Prayer Service. Sister Jacqueline welcomed all the sisters, and proceeded to warmly recognize and thank the outgoing leaders: Sister June Ketterer, SGM and Sister Dorothy Cooper, SGM, reviewing their respective qualities and accomplishments. Sister Jacqueline gave them each a bouquet of roses as token of love and gratefulness for their generosity in serving.

Sister Ella Christian, SGM Local Leader also expressed the gratitude of all the sisters to those two outstanding women.

Sister Jeanne was then missioned by Sister Jacqueline and responded: "With deep gratitude for the Sisters' trust in me, I humbly accept the leadership of St. Joseph Area for a term of three years."

Following the prayer service, a luncheon for all the Grey Nuns was held in the Country Kitchen at Youville Place.