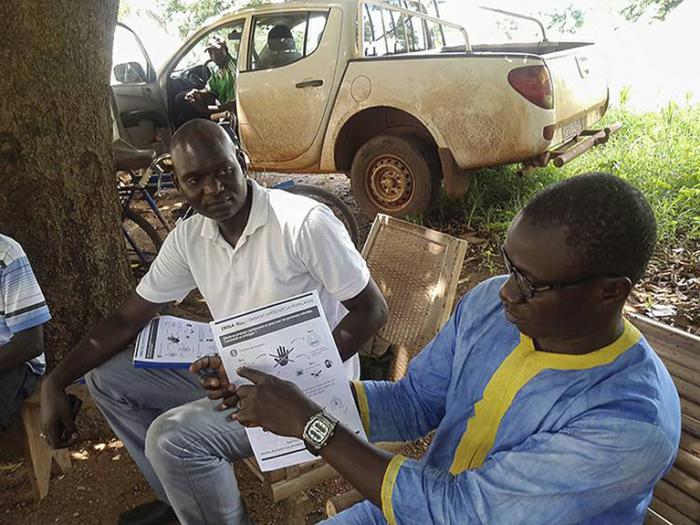 The Mayor of Salemata, Senegal, explains how to prevent Ebola from spreading during a community education meeting. Francisco Perez, a Catholic Relief Services worker with local ties spoke about CRS's efforts to support public education efforts across West Africa so the deadly Ebola outbreak can be contained. Pilot photo/courtesy CRS

BRAINTREE -- A Catholic Relief Services worker who studied in Boston spoke of the impact of the growing Ebola outbreak he saw in West Africa and the work the agency is doing to help stem the spread of the disease.

Now back in the United States, Francisco Perez had worked as CRS program manager in Guinea, Liberia and Sierra Leone until the relief agency pulled him out from Sierra Leone as non-essential personnel in August.

"I left about a month ago, once the situation became too difficult. Especially since I often work remotely, they asked me to just go somewhere where I can be safe," he told The Pilot, Sept. 9.

"I did not want to leave my friends and colleagues, but I also understood the gravity of the situation, especially since the one thing that people don't quite understand is that Ebola is a serious problem, but it's also really impacting the health systems -- the already fragile health systems in these countries -- which are now on the verge of collapse, essentially," he said.

"I sort of saw the epidemic unfold until it reached a crisis point with declaration of national states of emergency in Sierra Leone and Liberia," he said.

With the Ebola outbreak pushing the death toll over 1,000 according to CRS, the current push by the organization aims to create awareness and debunk urban legends and false information surrounding the crisis.

Perez gave a bird's-eye view of the initiatives.

"Part of the work that we are doing is spreading information. We have an information and education campaigns trying to explain to people how the virus is transmitted," he said.

Ebola is spread by direct contact with bodily fluids and although it has no cure, the disease is survivable with treatment. CRS advises that family members and those close to infected individuals, those washing bodies and conducting burials, and health workers are at highest risk of infection.

Perez said the outbreak would not likely spread in developed nations like the United States, but the region does face large scale consequences as the crisis deepens.

Much of the work CRS had done in the region has involved informational and educational campaigns directed at community healthcare workers in an already overtaxed healthcare infrastructure.

"We have created this entire system where we train community health workers -- not just CRS but a large number of partners including CRS -- to go out and perform rapid diagnostic tests for Malaria and then provide appropriate treatment. We can't, in good faith, now ask people to go out and do blood tests. That would be putting them at risk," he said.

Perez said the impact the system resulting from the Ebola outbreak could cause deaths and suffering beyond the direct impacts of the disease.

"So, we now have to count all of those children, all of those adults that will die of Malaria and other diseases because of the impact of Ebola on the health system, on, you know, transportation, on politics, on society, so I feel like the impact is much larger than what we're focusing on, and that should add a sense of urgency," he said.

A New York City native, Perez grew up as one of five children in a Catholic family that attended Church of the Ascension in New York City.

Grounded in the ideals of Christian living and supported by his family's hard work, he was able to attend Harvard. He went on to earn a master's degree in international and public affairs at Princeton, and later received a fellowship that gave him international experience. At CRS, he said he found a place to apply the skills he picked up in his education and uphold the values he learned as a young person.

"We're based on Catholic social teaching and we work with Church partners. So, right now one of our big pillars of our effort is to support the Catholic health facilities. These are institutions that are based in these communities that are rooted in these communities, and it means that we are not just working for these people. We are working with our Catholic brothers and sisters throughout West Africa," he said.

He said the people of the region evoked particular empathy from him, and he saw the region as a specific point of opportunity for him to strive to make a difference on behalf of the poor and marginalized.

"When we talk about a preferential option for the poor, this is what we're talking about. I know very well that if this Ebola outbreak had happened in London or New York, we wouldn't have had thousands of deaths," he said.

Intent on returning to the front lines as soon as possible, he said the support of his family and his faith provided him with the opportunity and responsibility to do good in the world, even in the face of such a crisis.

"I feel fortunate to have had the option of what to do with my career and not just doing whatever I could to make ends meet, and therefore, I feel like if you have a choice then you also have a responsibility. As a Catholic, as someone who believes that salvation is through faith and good works, those good works are important. You have to be able to show God and yourself that commitment, that you are really serious about doing something for someone else and doing it in a way that's not about feeding your own ego, but truly in the spirit of service," Perez said.