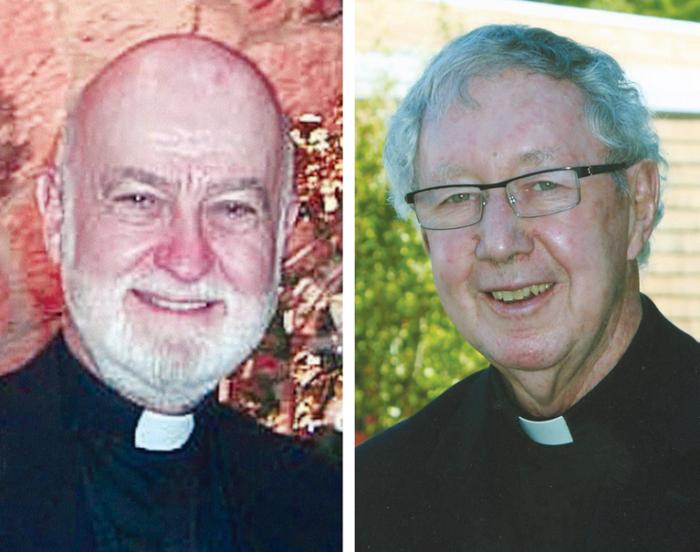 A Hudson native, where he was born on May 28, 1935, Father Joseph P. McDermott, a son of the late Mr. and Mrs. Nathan McDermott, was granted senior priest/retirement status on June 1, 2014.

After completion of seminary studies at St. John, Brighton, Father McDermott was ordained to the priesthood at St. Stephen Church, Framingham on Feb. 2, 1962 by Boston Auxiliary Bishop Eric F. MacKenzie.

Following ordination he was named an assistant at St. Michael Parish in Avon, six years later he moved just a bit northeast to St. Catherine of Siena Parish in Norwood, serving as an assistant there also. In 1975 he was granted permission to further theological studies at the Episcopal Divinity School in Cambridge. He returned to parish life the next year and was temporarily and briefly an associate at St. Isidore, Stow and then at St. Joseph, Amesbury.

In June 1976 he was appointed prison chaplain at MCI-Norfolk where he served until 1992; during these years he lived in residence first at St. Patrick, Roxbury and then at St. Timothy, Norwood. Speaking of those 16 years he told The Pilot, it was being pastor to a parish "behind the walls."

In September 1992, he was named pastor of Immaculate Conception Parish, Stoughton returning, almost, to where he had started out in parish life 30 years before. The Stoughton parish is a large and active one, and has an increasingly large Portuguese speaking contingent. Father McDermott learned Portuguese and so endeared himself to that "newer" portion of his flock at Stoughton. Two score and two years ago he went with much and varied experience under his belt to Stoughton.

The oldest of the five children of the late Leroy and Mary (Smith) Owens, Father Leroy Owens was born Oct. 30, 1935 and raised in Holy Ghost Parish, Whitman. Just as another famous son of Whitman, Francis J. Spellman had, Father Owens attended local schools, though in his senior year he went to Msgr. Coyle High School in nearby Taunton.

Following completion of seminary studies at St. John, Brighton, he was ordained at Holy Cross Cathedral by Cardinal Cushing on Feb. 6, 1964.

His first priestly assignment was as an assistant at St. Joseph Parish in Kingston. In 1969 he was named an assistant Our Lady Help of Christians where his particular ability of relating to and working with young people took off. The parish had a high school and he was faculty member, chaplain and also athletic director. The 14 year assignment at Newton made him a kind of legend at the parish and years later he was still returning for weddings and baptisms of former students and their children.

After Newton he was for one year a parochial vicar at St. Joseph Parish in Malden. At an age when most priests would have at least started to lose some of the energy and stamina needed to keep up with high school students, Father Owens began and eight year appointment as chaplain at Marian High School in Framingham, during these years he lived in residence at St. Bridget Parish and was reunited with Msgr. Francis Strahan who had been a weekend assistant at Newton for many of the years he was on the seminary faculty at Brighton.

His appointment at Marian High ended in 1993 but he remained as parochial vicar in Framingham until 1996 when he was named pastor at St. Edward the Confessor Parish in Medfield.

On arrival he found a large active parish, a new church and rectory, a religious education program which had some 1,200 students in it. As usual, he jumped right in and became an immediate "hit" in the parish. Both by need and desire, the parish has many ministries and the lay involvement both in leadership and participation is extensive, something which Father Owens built upon in his nearly 18 years as pastor.

In 2012 Father Owens made his annual retreat with other Boston priests at the retreat sponsored and arranged by Bishop Robert Hennessey. The retreat master that year was Father Timothy Radcliffe, OP who bore an amazing resemblance to Leroy. In deference to this "separated at birth" incident, Bishop Hennessey will call Leroy "Tim" when he sees him; Leroy will laugh knowingly, while everyone is trying to figure out why the bishop doesn't "know" Leroy's name.

Although designated a senior priest, Father Owens is not likely to "retire" any time soon. He will be living in residence at St. Linus Rectory in Natick; that parish is in the Natick Collaborative with abutting St. Patrick Parish. Father Owens' previous parish in Medfield is in a collaborative with St. Jude Parish in Norfolk.