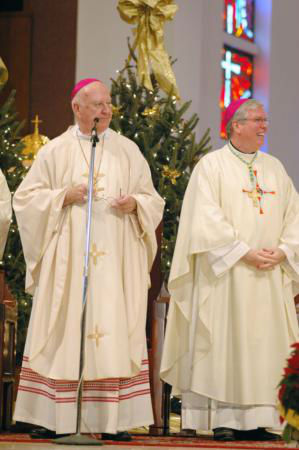 Bishop John J. Nevins, left, pictured in this 2007 file photo, died Sept. 1 at 82. He was appointed the first bishop of Venice, Fla., when the diocese was created in 1984. (CNS photo/David Gonzalez, Florida Catholic)

VENICE, Fla. (CNS) -- A funeral Mass was planned for Sept. 3 for retired Bishop John J. Nevins of Venice, the founding bishop of the diocese.

Bishop Nevins, 82, died Aug. 26 in his home in Venice. He had been in declining health.

A native of New Rochelle, New York, he was ordained a priest of the Miami Archdiocese in 1959 after studies at Tulane University in New Orleans, where he earned a master's degree, and The Catholic University of America in Washington.

He was named an auxiliary bishop of Miami in 1979 and ordained a bishop March 24 of that year. He was appointed the first bishop of Venice in 1984. He served as its leader for nearly 23 years, retiring on his 75th birthday Jan. 19, 2007, succeeded by his coadjutor, Bishop Frank J. Dewane.

A 2007 pastoral letter Bishop Nevins wrote, "Always Remember the Farmworkers," said that helping to improve the lives of migrant farmworkers remains "one of the major opportunities and challenges" facing Florida's Catholics. "We encourage all people to work in partnership with farmworker organizations and farmworkers in their quest for fair wages, safe working conditions and dignity. Workers also have the right to organize," he wrote.

In 1994, Bishop Nevins joined with the state's bishops in opposing efforts to amend the state constitution to allow casinos and riverboat gambling anchored in Florida's waterways. While gambling itself is not morally wrong, it can become morally wrong in some instances, the bishops said, voicing their concern about casino gambling's potential effects.

In 1992, the Venice Diocese conducted a special collection to help the people of Croatia and Bosnia-Herzegovina, struggling to break from Serb-dominated Yugoslavia. "The suffering of these people is intense," Bishop Nevins said. "The citizens of these newly independent nations have been the helpless victims of an aggressive and indeterminate attack, which has resulted in the deaths of thousands of civilians." he said, adding that because of longstanding historic animosities, the Catholic Church has been targeted. One anonymous donor sent jewelry carefully wrapped in paper towels.

During his tenure, Bishop Nevins ordained about 50 new priests, and recruited many more from other dioceses, although in a 1992 pastoral message, he declared, "We desperately need many more."

Also that year, he issued a pastoral letter, "Reverence for God and the Human Person," in which he called for Catholics to "stand up and be counted" on abortion, calling it a "special concern" in the church's efforts to promote a consistent ethic of life because it involves the right to life itself. Although Americans "live in a pluralistic society," he said, there are not two standards of morality -- there is only one."

The only child of first-generation Irish immigrants, Bishop Nevins was educated by the Irish Christian Brothers and entered the seminary for the Fathers of Mercy, a religious order of men.

According to Bishop Robert N. Lynch of St. Petersburg, in a blog posting recalling Bishop Nevins' life and ministry, "just before his ordination to the diaconate, the Fathers of Mercy were disbanded, leaving young John Nevins with no place to go."

To remedy this, Bishop Lynch said, "a wonderful Sulpician priest recommended that the 'homeless' seminarian contact Bishop Coleman F. Carroll, who was in his second year as bishop of the new diocese of Miami, and upon doing that he was accepted as a seminarian for Miami" and ordained to the priesthood in 1959.

"He had no other family than the church and the church cared deeply and lovingly for him," Bishop Lynch said.