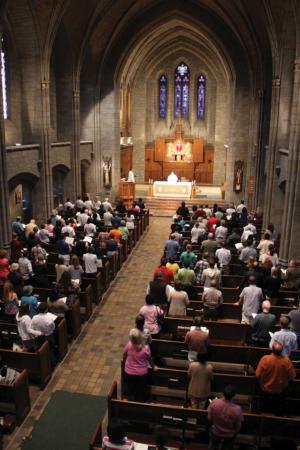 BACK BAY -- Keeping a shrine open for perpetual adoration requires more than a monstrance and an open door, it requires dedicated people.

With a Holy Hour and a Mass on the Feast of the Assumption of the Virgin Mary at St. Clement Shrine in Back Bay Aug. 15, the Oblates of the Virgin Mary who staff the shrine, celebrated five years of providing round-the-clock Eucharistic adoration to the local community.

Father Tom Carzon, OMV, director of seminarians for the Oblates, celebrated the Mass to mark the anniversary.

Volunteers who staff the shrine during Holy Hours explained the human element of keeping the shrine available to people at all hours in one of Boston's busiest neighborhoods.

"We kicked adoration off five years ago, and ever since then all day every day, 24 hours a day, seven days a week, we have had adorers coming at all hours of the day and night," Emilie George, division coordinator of Perpetual Adoration at the shrine, said.

The only church building with Perpetual Adoration in Boston, the shrine draws people from all over the city and beyond for quiet meditation in contemplation of Jesus Christ present in the Eucharist.

Currently, the shrine has 185 adorers who keep a weekly Holy Hour and keep the space open for others who attend. Substitute and occasional adorers also frequent the shrine and fill in as needed, so those who come in off Boylston Street can participate in adoration at any time.

Richard McKinney, who works for the Oblates of the Virgin Mary and coordinates perpetual adoration at St. Clement, explained how adorers who seek a Holy Hour or adoration late at night or before sunrise might have to get a key to the building.

People can make such arrangements with the staff during normal business hours, over the phone, or at www.adorationboston.org, but must come meet with the staff face-to-face beforehand.

"We like to see the person who we're giving a pass key to," McKinney said.

"It's a really great blessing. This is certainly something that I have committed to, to be able to just really be in the presence of the Lord at that hour," he said of his 1 a.m. commitment.

Those interested in adoration can knock on the door. At any given hour, someone doing what Limbo does will likely answer.

"Also, being able just to pray with the individuals who do come during those hours is to me something really special," he said.

The shrine hosts Masses, and other events, that sometimes create a break in availability for adoration, but generally the space is available for quiet prayer and meditation at all times.

Cardinal Richard Cushing sent religious sisters, the Franciscan Missionaries of Mary, to St. Clement in 1945 to turn it into a Eucharistic shrine. The sisters maintained perpetual adoration from 1945 to the late 1960s. The Oblates of the Virgin Mary began staffing the shrine in 1976.

In 2009, the Year for Priests, Pope Benedict XVI made a call for dioceses to create spaces dedicated to prayers for vocations and the sanctity of priests. The Archdiocese of Boston designated the shrine such a place later that year.

After the Holy Hour and Mass to celebrate the anniversary, the Oblates invited guests for a reception in the lower hall.

Don Changeu, 34, a parishioner of St. Gerard Majella Parish in Canton, first came to the shrine for adoration as a student in Boston.