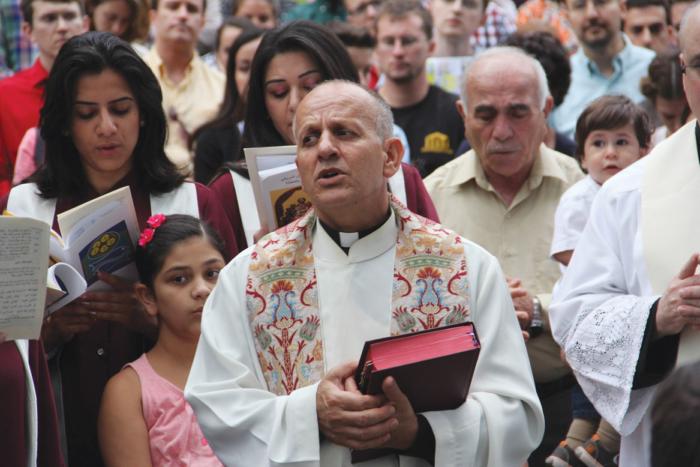 Father Bassim Shoni, Chaplain to the Iraqi Community of Boston, prays alongside local Iraqis and supporters, Aug. 16, as a procession ends after a Mass of solidarity with the Iraqi community of Boston at Mary Immaculate of Lourdes Parish in Newton. Pilot photo/Christopher S. Pineo

BOSTON -- The Archdiocese of Boston rallied to offer prayers at a Mass of solidarity with the Iraqi Community of Boston at Mary Immaculate of Lourdes Parish in Newton Aug. 16, and earlier that day Cardinal Seán P. O'Malley sat down with a group of local Iraqi Christians to get their perspective on violence impacting their Christian friends and relatives in their homeland.

"It was very painful to hear the personal stories," the cardinal told The Pilot after the meeting.

Cardinal O'Malley had called attention to the suffering of Christians in Iraq on his blog post the day before, and called for prayer intentions at churches throughout the Archdiocese of Boston for the Christians of Iraq. The cardinal had celebrated a Mass the night before at a gathering for young adults where a speaker called the events in Iraq "genocide."

At the meeting, held in the rectory at the Cathedral of the Holy Cross, the cardinal heard from some Iraqi members of the Our Lady of Mesopotamia Syriac Catholic Mission in Newton.

In Iraq, increasing violence has killed many Iraqi Christians, driving them from their homes into desolate regions to face the elements, an exodus that has taken the lives of many according to those who met with the cardinal.

Individuals at the meeting told the cardinal violence against Christians depicted on television and in the news recently has been downplayed. They said friends and family in Iraq had sent word that the suffering for the Christian community had not ended, and the situation remained grim.

One man told the cardinal that attempting to live in keeping with the teachings of Christ, Christians in Iraq tried to avoid fighting back through violence. That is not the Christian way, he said.

Speaking with The Pilot after the meeting, Cardinal O'Malley said the Church could be in a position to help with refugees who escape persecution, but extraction of Christians from Iraq remained a severe obstacle.

"If we are able to do more in the way of refugee resettlement, then we would ask the parishes to help with that as we have done in the past," he said.

He said the archdiocese would require partners in the government and the United States Conference of Catholic Bishops to accomplish more. He said in the past parishes have helped refugees in other situations relocate and find housing and work.

The cardinal said the archdiocese encourages local support for efforts to help the Christians in Iraq. Collections taken up at the Mass of solidarity with the Iraqi Community of Boston held that evening at Mary Immaculate of Lourdes Parish in Newton went directly to help Christians in Iraq via the Iraqi community in Boston.

"We certainly want to encourage people to keep praying. We know that this week there will be special prayers, but we would hope that people will continue to keep this intention and also to be generous when collections are taken up to help the refugees and the people of Iraq," he said.

At the Mass that evening, homilists Father Bassim Shoni, chaplain to the Iraqi Community of Boston, and Father Michael Harrington, director of the Office of Outreach and Cultural Diversity, addressed the suffering of Iraqi Christians and called for prayer in the face of suffering.

"This couple of weeks past, I was thinking about where God is, where God is in all of this," Father Shoni said.

He found the answer when he called his mother and father, displaced from their homes in Iraq before the terrorist advance. His mother told him that Jesus Christ was there with his people even through the suffering.

"You know that Jesus is with us," he said his mother told him.

Father Harrington urged Christians to reflect the light of Christ, even in such darkness, as he reflected on an exhibit inside the Holocaust Museum in Israel. The exhibit features one candle that lights up a dark room with what appears to be many candles using mirrors.

At the Mass representatives of various archdiocese prayer communities brought roses to the altar, along with the gifts, to mark their support for the Iraqi community.

As the Mass ended, those gathered processed outside to set the flowers before a statue of the Virgin Mary.

A group of young Muslim women had stood at the back of the church during Mass, but outside they stood amongst the Christians gathered to pray for peace and an end to the violence in Iraq.

"We saw this event, and we thought we would want to come to support our Christian brothers and sisters in Iraq and in Syria," Faiha Alfatlawi, an Iraqi Muslim, said.

She said her people have also suffered attacks at the hands of the advancing Islamic militants -- a force that entered Iraq from Syria.

"We feel like the enemy that is attacking these people is also our enemy. They have been attacking our mosques since the beginning," Alfafatlawi said.

She said the general consensus of Muslims is that the Islamic State, the radical militants in Iraq, are criminals not representatives of Islam.

Members of the Iraqi community that night wore white t-shirts with the Arabic letter "N" emblazoned on the chest. A handout at the Mass explained the letter to represent the word "Nazarene," which terrorists who call themselves the Islamic State painted on the homes of known Christians as they overran cities and towns in Northern Iraq.

The symbol on the door came with a choice, convert to Islam and submit to a religious tax and Sharia law, or be killed.

Many Christians chose instead to flea before the militants dedicated to forming an Islamic Caliphate in the region.

On social media, many Boston Catholics -- priests, religious and laypeople -- have recently posted pictures of the character "Nun" to show support for Iraq's Christians. Some feature the letter in gold on a black background, but some have posted a photo of the letter with a circle around it.

"The red one with the circle around it is exactly what is painted on the households of those who have been given an ultimatum," said Feras Michael, 37, a member of Our Lady of Mesopotamia Syriac Catholic Mission in Newton.

Michael spoke with the cardinal at the meeting earlier in the day.

"I have never met a cardinal before, so that in and of itself was very special," he said.

He said he found the concern the cardinal showed very comforting.

"It brought a level of comfort to know that someone, who really had in the end no real reason to care as a human, actually cared so much and wanted to do something about it. It is he who reached out to us. I am sure he is very busy. He really could have had a hundred excuses not to, but he made the time for us," he said.

Michael said he hopes Catholics and the public in the United States will hear the call of Iraqi Christians for peace on a grander scale.

On a local scale, he said he appreciated the input from the cardinal regarding the suffering of Christians in his homeland -- which include his friends and family.

"It was great to hear the positive intent he had and some of the plans and some of the ideas -- within his power, within his control. One can only hope and pray that what we as a group are trying to achieve will slowly become reality with his help, and with God's intercession of course," Michael said.