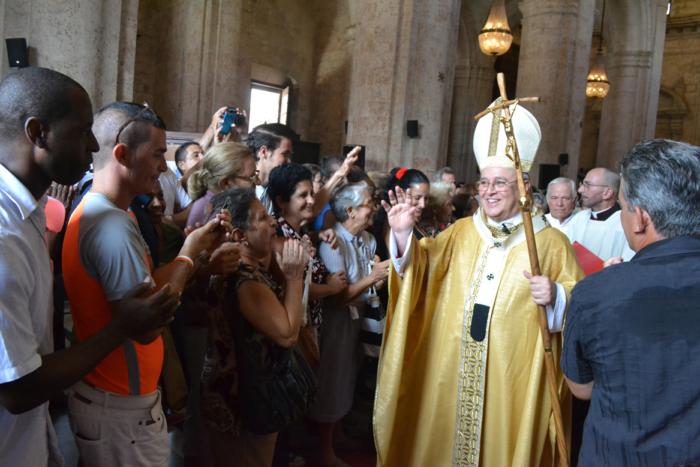 "In many ways, it has been Cardinal Ortega who has been able to expand what the Church is able to do ministerially in Cuba." Pilot photo/CardialSeansBlog.org

...I traveled to Cuba to be part of the celebration in honor of Cardinal Jaime Ortega, who is celebrating 50 years of priestly ordination. He has been the Archbishop of Havana for over 30 years. The local church there planned the celebration and, in solidarity with the Church in Cuba, a number of us from the United States went to be present including Bishop Octavio Cisneros, Archbishop Roberto Gonzales and Cardinal McCarrick. Mario Paredes from the American Bible Society, which recently sponsored a biblical exhibition in the Cathedral of Havana, was also with us.

In Havana I stayed at the nunciature. It is where I stayed in 2002 when I was making the visitation to the seminary. I remember that on my first day at the nunciature there was a lot of excitement because a huge crowd of young people stormed the Mexican Embassy, which was right next door, seeking political asylum. They climbed up on the roof, commandeered a bus and broke down the gate to get into the embassy. Their asylum didn't last long because the army arrived in the middle of the night and arrested them all.

...On the way back from the church we passed the Church of St. Rita were there was a demonstration by the Damas en Blanca, who are the wives of political prisoners. Having travelled to Cuba over many years, it is interesting to see how much the situation has changed. For example, one of the amazing things for me was to see how many people are traveling every day to Cuba. While there has been a great deal of improvement, of course there are still tensions. Certainly tensions between the United States and Cuba are exacerbated by the imprisonment of Alan Gross. We are hoping this situation can be resolved, not only for humanitarian reasons -- his mother recently died while he has been in prison and he has had health problems -- but it is also a great obstacle to the normalization of relations between the United States and Cuba. The Cuban government is demanding the release of three Cuban prisoners who have been held in the United States for spying, and the United States is demanding the release of Mr. Gross.

I have also seen a marked improvement in the Church's situation, just in the way it has more space to move. In many ways, it has been Cardinal Ortega who has been able to expand what the Church is able to do ministerially in Cuba.

When I first travelled to Cuba in the early 80s, the activities of the Church were very severely curtailed. If someone under 70 years of age went to Mass they would be threatened, but now you see families going to church and they have been able to build a new seminary. The Church also engages in charitable works in the parishes, particularly taking care of the elderly. There are many elderly people whose families have left Cuba and they are on their own. So the Church, especially through Caritas Cubana, has expanded her outreach to the needy.

From there, I went to Orlando for the Knights of Columbus' 132nd Supreme Convention.

At the banquet we were addressed by actor Gary Sinise, who spoke about his wife's and his conversion to Catholicism. He also spoke about the mission he has taken on to help service members who have suffered severe injuries or amputations and helping them to be able to cope with their disabilities through providing what are called "smart houses." The Knights of Columbus are cooperating with his foundation to help wounded veterans. We were also addressed by Bishop John Noonan, who is the Bishop of Orlando and Cardinal Orlando Quevedo, who is the Archbishop of Cotabato in the Philippines and Cardinal Rivera Carrera the Archbishop of Mexico City and the keynote address was given by Cardinal Lacroix of Quebec. The States Dinner is always a very impressive occasion to see the national -- and increasingly international -- scope of the Knights of Columbus.