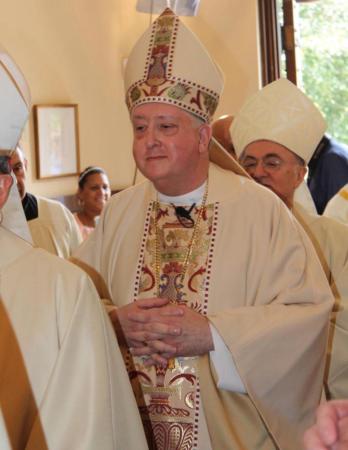 On a warm Aug. 12 afternoon, the Cathedral of St. Michael, the seat of the western Massachusetts Diocese of Springfield, was filled to capacity. Representatives of local government, interreligious and ecumenical delegates; people from the Pioneer Valley's parishes; men and women religious, deacons and priests from the local Church and from the Archdiocese of Baltimore; joined with bishops from around New England, Maryland and beyond, and with the bishop's parents and other family and friends from Maryland for the Installation Mass of Bishop Mitchell Thomas Rozanski.

Formerly an auxiliary bishop of Baltimore, he had served almost exclusively in parishes there prior to his being named an auxiliary of the "premier see" in 2004. The new Springfield bishop's 10th anniversary of episcopal ordination will be Aug. 24.

Greeted at the door of his new cathedral, by the rector, Msgr. Christopher Connelly, Springfield's eighth Bishop Timothy McDonnell and Cardinal Seán P. O'Malley, the metropolitan Archbishop of Boston, the bishop kissed the crucifix and blessed those near him with holy water.

The papal nuncio, the Holy Father's representative in the United States, Archbishop Carlo Vigano welcomed the new bishop and read the letter of appointment -- the apostolic mandate. Cardinal O'Malley and the nuncio escorted the bishop to his chair -- the cathedra, from which a cathedral church takes its name.

The nearly three hour long Mass continued with readings proclaimed in Spanish and English and the homily delivered in English, Spanish, and Polish. The General Intercessions were proclaimed in several other languages regularly used in liturgical celebrations across the Springfield Diocese -- the largest in territory of the four Catholic sees of Massachusetts.

Bishop Rozanski's new diocese covers some of the most beautiful sections of the Bay State and has 81 parishes; 104 active diocesan priests; 87, permanent deacons; 13 religious brothers and 333 women religious. The general population of the state's four westernmost counties is about 828,000 of whom 220,000 are Roman Catholic. There is a large Polish population mostly second and third generations, and an even larger Hispanic population especially in the see city and in Holyoke.