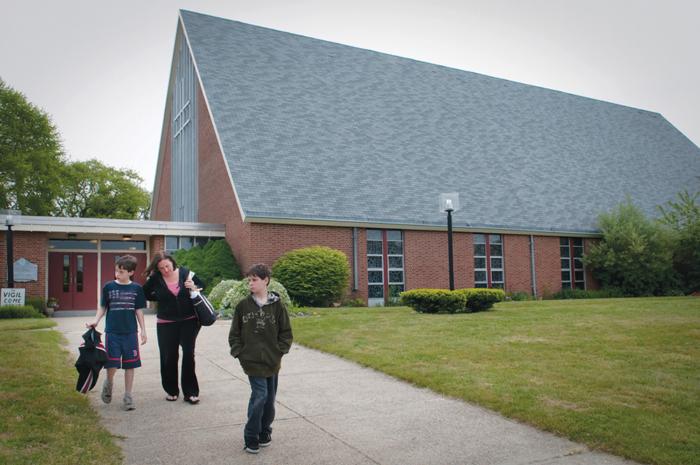 A family leaves St. Frances Xavier Cabrini Church in Scituate in May 2010 after spending the night as part of a round-the-clock vigil aimed at keeping the church from closing. On July 29, Cardinal O'Malley called on those at the church to end their vigil now that the Vatican has rejected their final appeal. CNS file photo/Jodi Hilton

BRAINTREE -- Cardinal Seán P. O'Malley is calling on former parishioners of a closed Scituate church to end their nearly decade-long vigil now that the Vatican has rejected their final appeal.

In a letter dated July 29, Cardinal O'Malley asked those in vigil at St. Frances Xavier Cabrini Church in Scituate to abide by a decision of the Vatican's highest court, which ruled in June that the Archdiocese of Boston does not have to reopen their church, which was closed in 2004.

"We hope it is appreciated that the Archdiocese has shown its respect and patience for those who have occupied this site over the last nine years," the cardinal said in the letter.

In the 2004 Parish Reconfiguration, the archdiocese "suppressed," or legally dissolved, 70 parishes and subsequently closed most of their church buildings. In response, former parishioners at 11 parishes filed appeals with the Vatican and several occupied church buildings to keep them from closing. After several rounds of appeals, the Vatican ultimately upheld the archdiocese's right to dissolve the parishes in 2010.

A second round of appeals sought to stop the church buildings from being "relegated to profane but not sordid use." "Relegation" allows the church building to be used or sold for secular purposes but not for "sordid use," one that is immoral or offensive to Catholics.

In his letter, the cardinal urged those at St. Frances Xavier Cabrini, which is the only closed church still occupied, to respect the high court's decision. He noted that the Archdiocese of Boston stood ready to abide by any decision issued by the high court, even if it went against the archdiocese. He said he expected the same from those in vigil.

Archdiocesan officials confirmed that the decision by the Apostolic Signatura bears with it the authority of Pope Francis, as the cardinal pointed out in the letter.

"Now that the Signatura has confirmed the decisions of the Archdiocese and denied the final appeals, it is the expectation of the Holy Father that all parties accept this final decision in good faith and in serenity. A refusal to accept the judgement of the Church in this matter would be contrary to the purpose for which you sought recourse," he said.

As he has in the past, the cardinal called on those in vigil to return to parish life locally.

"With the canonical process concluded and the decision of the Church on this matter final, I ask those in vigil to abide by that decision. Please know that we look forward to your presence and participation at the local parishes, joining together as one family in Christ," Cardinal O'Malley said.

Peter Borre, an advisor to the former parishioners during the appeals, called on those in vigil to make an appeal directly to Pope Francis, soon after the decision of the Apostolic Signatura in June. He also said he would draft such a personal appeal, outside any canonical process.

Speaking with The Pilot Aug. 5, Borre said he understood that the Apostolic Signatura's decision came with the authority of Pope Francis.

"The Signatura's decision, one assumes, conforms with the wishes of the Holy Father, but the Holy Father could always exercise the right of mercy in responding to a direct plea," Borre said.

Borre said the personal appeal will address the issue of archdiocese finances in relation to the closed parish, based on his interpretation of a report from Fiscal Year 2013 that he says showed a surplus of money in the archdiocese.

"The consequence is that if -- as is my own view -- the results for the archdiocese from fiscal 2013 were strongly positive, notwithstanding the challenges that lie ahead for all of us, the grave reason for deconsecrating the church, namely the extremely difficult circumstances of the archdiocese, do not obtain. Therefore, there is no grave reason to deconsecrate the church," Borre said.

The archdiocese said the amount Borre referred to is money belonging to parishes that the archdiocese cannot simply take and redistribute, according to Church law.

Archdiocesan spokesperson Terrence C. Donilon reaffirmed a commitment by the archdiocese to financial transparency and to reaching a peaceful end to the vigil.

"We have made financial transparency a priority and publish all of our financials on our website at www.bostoncatholic.org. While our overall financial situation has stabilized, I can assure the faithful we are not operating with a surplus and there are many major challenges remaining. We continue to seek a peaceful and prayerful resolution to the vigil," Donilon said.