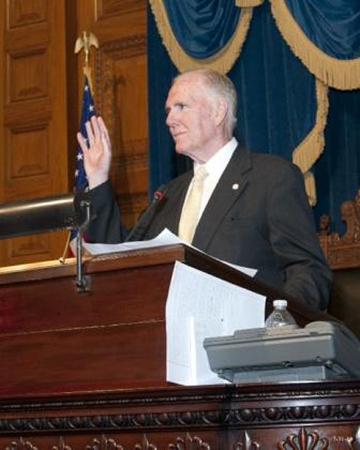 "Mayor Flynn's commitment to social and economic justice united the city of Boston during a turbulent period in its history," said House Speaker Robert DeLeo. "The efforts of this man have touched the lives of many."

In the resolution, the House of Representatives recognized Flynn's leadership in divesting municipal funds in South Africa as a protest against the apartheid regime and for his efforts to secure peace and justice in Northern Ireland.

"I was proud to represent and fight for the people of South Boston and Dorchester," said Flynn, while addressing the House chamber. "We enacted into law some of the most important and responsible policies in the country from helping the state's higher education system, creating private sector jobs, building new schools and modernizing drug and gun laws."

The House membership also recognized Flynn's commitment to social justice and his advocacy for the homeless and handicapped. As a state representative, Flynn led the charge to enact a law that required local communities to provide every child with an education, regardless of physical or mental disability.

"Ray Flynn has an unmatched record of concern for the handicapped, special needs people and the homeless," said Rep. Nick Collins, D-Boston, who filed the resolution on behalf of the Boston legislative delegation. "It was amazing to hear Mayor Flynn talk about the impact that the Massachusetts Legislature had on world opinion in speaking out against racial injustice in South Africa and for peace and justice in Northern Ireland."

"While he was talking to the entire House, you could hear a pin drop and when he finished his comments, the Legislators broke out in a sustained applause. It was truly one of the warmest welcomes that anyone has ever received at the State House," Collins said.