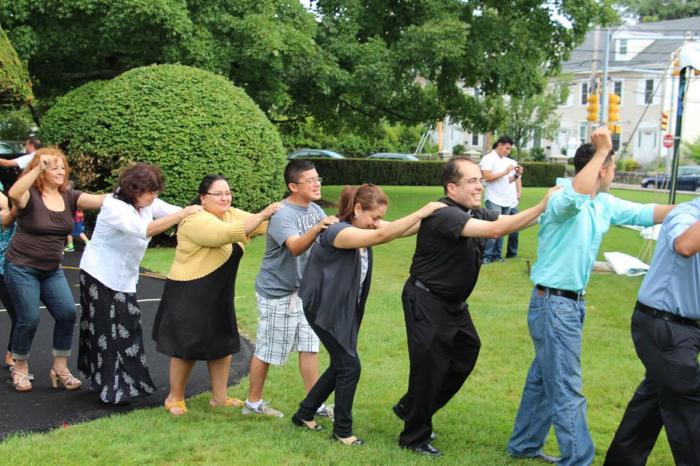 'On Sunday (7/27), I traveled to St. Mary Parish in Waltham to celebrate the closing Mass of their Haciendo Lio gathering, organized by the AGAPE youth group there.' In keeping with the idea of going out "in the streets," all the activities took place outside. Pilot photo/CardinalSeansBlog.org

In spite of a unanimous decision of the United States Supreme Court declaring unconstitutional the Massachusetts law enforcing a 35 foot "buffer zone" around abortion clinics, the Massachusetts legislature acted with unseemly haste to establish what amounts to a new buffer zone of 25 feet. After both branches of the legislature sent the bill to the governor who signed it into law, the effect again is to make it very difficult for citizens seeking to offer alternatives to women contemplating an abortion. The civil law must balance the rights and duties of all individuals and we must be vigilant to ensure the safety of all people, regardless of their position on this most serious issue.

I recognize the struggle for all involved, but I believe preventing any reasonable possibility for dialogue is a misguided use of civil law. The Supreme Court seldom is unanimous in our day; the fact that it was on this question gives me hope that the judiciary will once again correct what I regard as an unjust limitation on free speech in Massachusetts about a fundamental moral and human issue.

On Sunday (7/27), I traveled to St. Mary Parish in Waltham to celebrate the closing Mass of their Haciendo Lio gathering, organized by the AGAPE youth group there. "Haciendo Lio" is Spanish for "making noise" or "making a ruckus" and the gathering took its name from the words of the Holy Father at World Youth Day in Rio de Janeiro when he told the young people: "I would like us to make noise, I would like those inside the dioceses to go out into the open; I want the Church to be in the streets."

The gathering brought together the Hispanic communities of a number of parishes including St. Mary, St. Stephen in Framingham, St. Benedict in Somerville, Most Holy Redeemer in East Boston, St. Rose of Lima in Chelsea, Immaculate Conception in Everett and St. Columbkille in Brighton and the events went on for three days. In keeping with the idea of going out "in the streets," all the activities took place outside and they erected a huge tent on the parish grounds. They had prayer services, food, music and all manner of activities throughout the weekend. It started on Friday night with a vigil and then on Saturday there was a soccer tournament amongst the various parishes. (I understand that St. Stephen in Framingham won first place, but at least the home team of St. Mary came in second.) On Sunday, the people gathered on the lawn outside St. Mary to "make noise" with singing and dancing. We celebrated the closing Mass in the tent on the lawn. With us at the Mass were the pastor of St. Mary, Father Michael Nolan, Father Michael Harrington, Father Dan Hennessey, Father Carlos Suarez, Father Augustin Gomez and Father Gabino Macias. We are grateful to Father Nolan, the pastor of St. Mary, and all those who worked to organize this important event.

On Monday (7/28), I traveled to Charleston South Carolina for the USCCB's 2014 People of Life Mass and Awards Dinner, which is part of the National Meeting of Diocesan Pro-Life Directors. We were very happy that our own pro-life director from the Archdiocese of Boston, Marianne Luthin, was able to be there for the event...This year, the Little Sisters of the Poor were recognized for their willingness to stand up and not compromise their religious beliefs in the face of the HHS mandate. Since the sisters, whose charism is to help the elderly poor, hire and serve people of all faiths they were not considered a religious organization and would have had to provide sterilization and abortifacient drugs under their health plan. The sisters filed a lawsuit to stand up for their rights to live according to their faith. The provincial, Mother Loraine Maguire, received the award on behalf of the sisters.