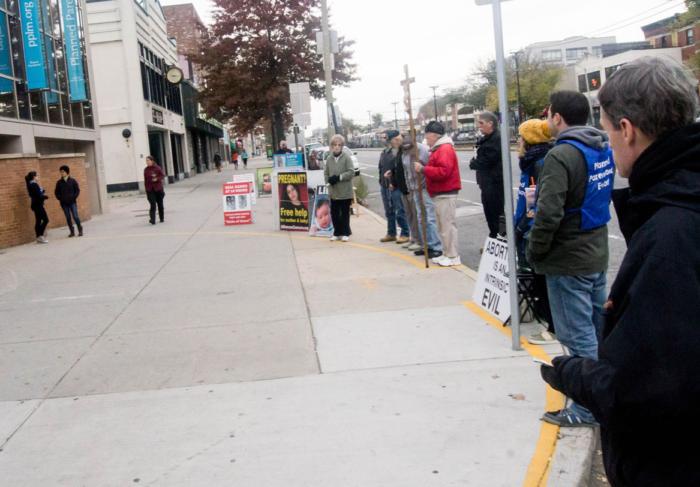 Abortion opponents stand outside the 35-foot buffer zone around a Planned Parent clinic in Boston in 2013. After that law was ruled unconstitutional, Massachusetts lawmakers created a new law in July 2014 that allows police to create a 25-foot buffer zone at their discretion. Pilot file photo/Christopher S. Pineo

When it ruled on McCullen et Al. v. Coakley in June, the Supreme Court found that a 35-foot zone around abortion clinics put an undue restriction on the free speech of those advocating for human life. The court ruled the law unconstitutional by a vote of 9-0, but Massachusetts lawmakers scrambled to create a replacement within a month. Gov. Deval Patrick signed the bill into law July 30.

In a statement issued Aug. 1 on his weekly blog, www.cardinalSeansblog, Cardinal Seán P. O'Malley said, "The Supreme Court seldom is unanimous in our day; the fact that it was on this question gives me hope that the judiciary will once again correct what I regard as an unjust limitation on free speech in Massachusetts about a fundamental moral and human issue."

"In spite of a unanimous decision of the United States Supreme Court declaring unconstitutional the Massachusetts law enforcing a 35 foot "buffer zone" around abortion clinics, the Massachusetts legislature acted with unseemly haste to establish what amounts to a new buffer zone of 25 feet," the cardinal said.

The new law gives police on hand at abortion facilities the power to disperse a group -- which may be as few as two people -- found to "substantially impede" access to abortion facilities, moving the group back 25 feet from the entrance of the facility, for a maximum of eight hours or until the clinic closes, and prevents any blocking of vehicle access to the facility.

Even first-time offenders found to "impede a person's access to or departure from a reproductive health care facility with the intent to interfere with that person's ability to provide, support the provision of or obtain services at the reproductive health care facility" could face a fine of $1,000 and six months in prison. Repeat offenders face fines of up to $25,000 and 5 years in prison.

The cardinal said laws and lawmakers have an obligation to honor the rights of all people involved, even in difficult situations.

"The civil law must balance the rights and duties of all individuals and we must be vigilant to ensure the safety of all people, regardless of their position on this most serious issue," he said. "I recognize the struggle for all involved, but I believe preventing any reasonable possibility for dialogue is a misguided use of civil law."

Michael DePrimo, an attorney for Eleanor McCullen, the lead plaintiff in McCullen v. Coakley, said July 29 that new law will have a chilling effect on advocates for human life -- whom the Supreme Court had referred to as "sidewalk counselors" not "protestors" during oral arguments.

"The new buffer zone law is a backdoor attempt to interfere with the constitutional right of free speech in the service of women seeking abortion whose minds are not made up -- women who are looking for the hope, help, love, and concrete aid offered by Eleanor McCullen and other peaceful sidewalk counselors," he said.

"This new law chills life-saving speech by threatening massive civil fines for non-violent acts such as peacefully offering a leaflet of information to passersby on a public sidewalk," DePrimo said.

Sen. Harriette L. Chandler of Worcester filed "An Act to Promote Public Safety and Protect Access to Reproductive Health Care Facilities," July 14, with the support of Planned Parenthood League of Massachusetts, Attorney General Martha Coakley, Gov. Deval Patrick, Senate President Therese Murray, and House Speaker Robert A. DeLeo. Critics of the bill at the time pointed to the involvement of Planned Parenthood as a potential conflict of interest.

"The reality is that individuals in the abortion industry have a business incentive to falsely characterize any attempt at pro-life communication on the public ways outside abortion clinics as a form of harassment or intimidation, no matter how peaceful," he said.

"It is important for law enforcement to understand that momentary attempts at peaceful communication to offer hope, help and love are constitutionally protected expressive conduct, despite the legislature's rejection of an amendment offered by Representative Jim Lyons that would have made that expressly clear," DePrimo said.

DePrimo also addressed the extended discretion and power given to the police under the new law. He pointed out that a citizen threatening public safety can already be arrested under current state or federal law, and face a judge based on evidence and testimony.

"The new law signed by the Governor ignores those common resources, and instead invites state censorship by enabling police to order peaceful citizens to stand on a 25-foot line for the remainder of the abortion clinics' business hours. The new law is unconstitutional not only because it is vague and overbroad, but also because it purports to grant to law enforcement the power to issue a temporary restraining order -- a power that may only be exercised by courts," he said.

He said his client, McCullen, would continue to serve the women of Boston in need of an alternative to abortion alongside other peaceful sidewalk counselors.

"The first amendment protection of free speech cannot be placed behind painted lines," he said.

McCullen declined to comment directly for The Pilot whether she planned to challenge the new law in court.

"We will closely monitor law enforcement's use of the new law to ensure that our clients' peaceful exercise of first amendment rights is not infringed," her lawyer said.