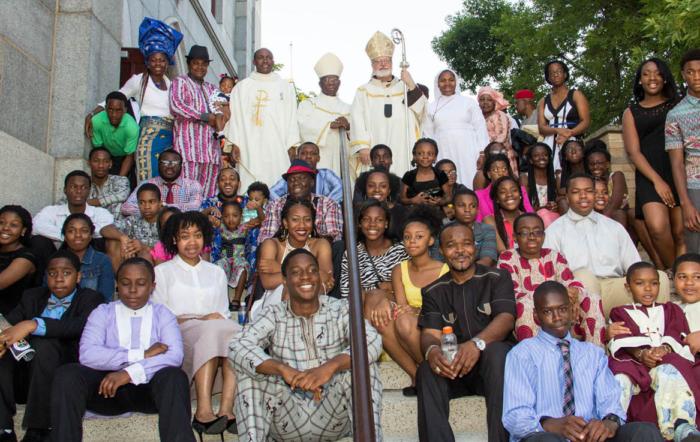 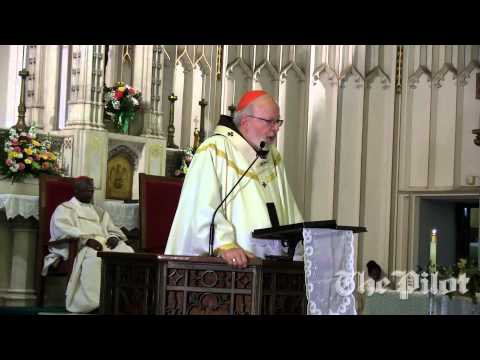 Cardinal Arinze, Prefect Emeritus of the Congregation for Divine Worship and the Discipline of the Sacraments, traveled from Rome to celebrate the anniversary alongside Cardinal Seán P. O'Malley, who celebrated the Mass for the Nigerian community -- one of the largest outside of Nigeria.

Cardinal O'Malley noted in his homily that the celebration fell on the feast day of the Virgin Mary's parents, Sts. Anne and Joachim.

"It's a reminder to us that we are Jesus' family. Mary is our mother, and we are all brothers and sisters in the Lord. The Nigerian Catholic Community is a very important part of our Catholic family," the cardinal said.

"There was a time in Boston when most of the Catholics were Irish or Italian. Today, we are truly Catholic and universal, showing the world that we Catholics come in all sizes, shapes, and colors, and speaking every language imaginable -- all of Jesus' family with Mary as our mother," Cardinal O'Malley said.

In 1988, a group of Nigerians living in Boston approached Father Gerald Osterman, pastor of St. John-St. Hugh Parish, and requested permission to worship together as a community on Sundays. St. John-St. Hugh would become part of St. Katharine Drexel Parish when it was established in 2005.

"In this venerable church we congratulate the Nigerian Catholic Community today. We thank His Eminence Cardinal O'Malley and the Boston Archdiocese for your kind hospitality to the Nigerians, who together with the local Church, function as the one Catholic, Universal Church," Cardinal Arinze said as the Mass ended.

After the Mass, the Nigerian community invited guests to the Reggie Lewis Athletic Center for reception with dinner and dancing.

Father Jude T. Osunkwo, chaplain of the Nigerian Catholic Community, said prayers at the Mass included intentions for peace considering some of the recent news out of Nigeria -- where persecution of Christians has made headlines recently.

"We are going through all this, but we are still standing strong. We are rooted, we are on the ground, and we are moving forward. That was precisely what we celebrated," he said.

Native Nigerians and Americans of Nigerian descent who attended the celebration said having Cardinal Arinze celebrate the anniversary with them provided a sense of solidarity with the community and Nigerians throughout the world.

Obiageli Ibili, who came to the United States in 1982, said she originally attended a parish in Cambridge where she lived for 14 years after moving to the U.S., but joined the Nigerian Catholic Community in 1996.

She said Cardinal Arinze's presence had a special significance for the community.

"It's a big deal for Nigerians because Cardinal Arinze represented the whole Nigerian community, both here and in the Vatican," she said.

She also said the news will likely reach her homeland.

"The Nigerians back home, they will hear about this celebration. They will be very honored that the cardinal was here to celebrate with us," she said.

Adugo Ugocha, a junior at Amherst college, said she came to Mass with the Nigerian community at St. Katherine Drexel. She noted that both cardinals contributed to the beauty of the celebration.

"Having Cardinal Seán O'Malley and Cardinal Arinze at the church really brings to the forefront how Catholicism is a religion that is universal, in showing that no matter what boundaries the people might have that Catholicism is supposed to be about love and faith," she said.

She said the solidarity came at an important time as Nigeria faces turmoil in recent times. She referred to fighting between the Islamic fundamentalist group Boko Haram and Christian militants in Nigeria.

"Considering also how there is persecution in Nigeria, with Boko Haram versus the Christians and the Christians retaliating, it's really powerful to come together and pray for not only ourselves here to do well, but for also the blessings of our relatives back at home," she said.