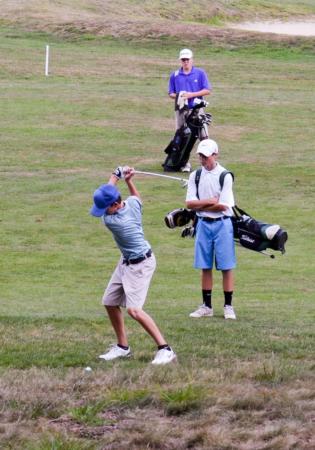 Dylan Parnell of Hingham swings at a ball in the rough. Dylan had no such problems on Hole #2 as he walked off the 135-yard par three with a hole-in-one. Pilot photo/courtesy Rick Mattulina CANTON ? Andrew Boyle walked off with a hard-fought, 1-up victory over Michael Breviglia of Canton in the Senior Division of the 75th annual Boston CYO Golf Tournament.

Boyle rallied from the eighth seed in the medal round to upset Breviglia for top honors in the oldest junior golf tournament in New England, held at Ponkapoag Golf Course in Canton July 21-24.

In a sense, though, it was Boyle's hometown of Hingham that garnered the most honors. Half of the 10 finalists, including three of the division winners, were residents of Hingham.

Most of the youngsters trudged through five rounds in three days of bright sun, 80-plus degree heat and high humidity. Hydration was the order of the day as the golfers consumed case after case of water and Gatorade.

"This type of athletic event is meant as an outreach to all kids, whether they are of the faith or not," said the tournament organizer, Father Matt M. Williams, director of the archdiocese's Office for Faith Foundation of Youth and Young Adults.

"Events like these," he said, "are community builders. Church leaders can forge relationships with the kids and show them that the Church isn't something to be scared of.

"The kids mostly don't even know what CYO stands for," he added with a laugh. "But that is precisely why we run events like this. It is an opportunity for the Church to go out where our young people are and engage them in a dialogue."

Seventy-six youth ranging in age from nine to 18 competed in five divisions determined by age. They came from New Hampshire to the Cape, but there must be something special in that Hingham water.

Neighbors Brian Glennon and Tommy Johnson guaranteed that Hingham would win the Boys Cadet (13 and under) Division. Brian was the top seeded Cadet and took the crown with a finals score of 7 up.

Samantha Leary of Hingham fought the good fight, but fell to the overpowering play of Jennifer Keim of South Yarmouth in the Girls Senior Division.

Junior Dylan Parnell of Hingham had the clubhouse buzzing with a hole-in-one on the 165-yard par-three second hole on July 22. His opponent, Dan Murphy of Franklin, was the hard-luck loser on that hole, carding a birdie of his own.

Veteran golfers and course pros marveled at the play. Not one of them could remember a birdie ever losing on a par three.

Richard Miller of Hingham drove the green pin-high on the 312-yard par four eighteenth and holed his eight-footer for an eagle.

Andrew Boyle and Jared Sullivan of Duxbury fought through three holes of sudden-death before Boyle moved on to the Senior semis.

In the July 21 medal qualifying round, Ryan Keim fired a one-over 71 for low score among the Boys Seniors, and his sister Jennifer's 79 took medalist honors for the girls with a scorching 79.

The Cadet medal round was a dog fight all the way with Brian Glennon, Jake McArdle of Milton and Thomas Singleton of Canton each finishing with scores of 85. A card-off was needed to declare Glennon the number one seed.

The first CYO tourney was held in 1940 under the direction of the late Msgr. George Dowd. More than 330 young men took to the fairways for the inaugural event.

The number of players grew steadily through decades as generation followed generation to the Ponkapoag fairways and the tournament was opened to girls and non-Catholics.

It remained very much a family affair this year with six pairs of siblings including three sets of twins.

"Many of these kids have siblings, parents and grandparents who played in the tournament before them," said Father Williams. "Some families have had more than one winner, and we've seen some players who grew up to play professionally. So there is definitely a longstanding tradition associated with this tournament."

Entries have declined in recent years due in large part to the rapidly increasing number of tournaments vying for young golfers.

But the event bounced back in a big way this year with more than double the number of players in 2013.

"Such an increase in young golfers is good, not only for the sport, but also for the Catholic Youth Organization, which aims to introduce kids to faith through all kinds of outreach events," Father Williams said.

"Our Catholic identity was strong and I believe it helped these young people know that they are loved by the Lord and his Church, and that He has great plans for their lives," Father Williams said. "A very special thank you goes out to our 75th Anniversary committee, whose selfless dedication to this historic event made it a great success."