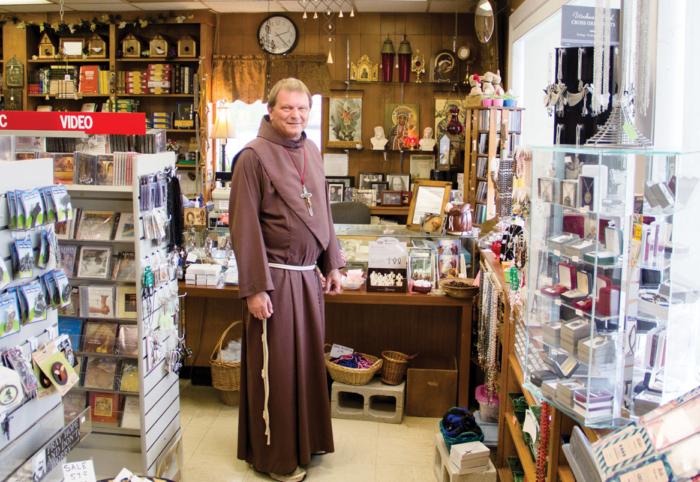 Brother Thomas Banacki, SA is pictured in the gift shop of the Chapel of Our Savior in Brockton. Pilot photo/Christopher S. Pineo

BRAINTREE -- Speaking in 2013, Cardinal O'Malley said, "Thomas a Kempis said if there was only one Mass celebrated once a year, in one place, by one priest, everyone in Christendom would spend their whole life trying to get there, to be able to attend Mass at least once during their life, but we have Mass everywhere -- even in the malls."

Within the Archdiocese of Boston that statement rings true, three times over.

Inside the North Shore Mall in Peabody, Carmelites run and staff St. Therese Chapel. Opened under Cardinal Richard J. Cushing in 1960, the Carmelite chapel serves both shoppers and employees of the mall. Director of the chapel Father Herbert Jones, OCarm., said the opening of his chapel and two other mall chapels within the Archdiocese of Boston coincided with an expansion of shopping areas into more suburbs.

"The whole idea of clustering stores in the suburbs rather than each town having their business/commercial district, that was a whole new concept back in the late 50s," Father Jones said.

The Carmelites agreed, and joined Cardinal Cushing in his effort to bring the church into centers of day-to-day life in Massachusetts.

Today, the chapel offers Mass twice a day on weekdays, once on Saturdays at noon followed by two vigil Masses, and offers the Sacrament of Reconciliation. For Holy days of obligation, the friars offer a vigil Mass and three Masses on the feast day. The chapel even hosts a monthly men's group meeting on the third Tuesday of each month.

The chapel also features a Catholic book and gift shop, like the other two mall chapels in the archdiocese.

The community celebrated its 50th anniversary in 2010 and the chapel underwent renovations that year. Cardinal O'Malley rededicated the chapel as part of the anniversary. At that time, the Carmelites remained as one of only two original tenants of the mall, according to the cardinal.

Father Jones described the chapel as providing a spiritual "oasis" amidst the commercial atmosphere of the mall, a sentiment shared by other chapel administrators contacted by The Pilot.

At the Chapel of Our Savior adjacent to the Westgate Mall in Brockton, the Franciscan Friars of the Atonement provide two daily Masses, confessions and a daily rosary.

Chapel director, Brother Thomas Banacki, SA, and Father Jerry DiGiralamo, SA, spoke about the history of the chapel, and its ministries today.

The chapel was built in under a year to be dedicated in 1961, in 2012 the friars added a prayer garden behind the chapel with statues and benches and the Stations of the Cross.

Father DiGiralamo said, Cardinal Cushing had a vision of outreach to people who might even be simply passersby with an interest in the Catholic Church.

"His idea was making it an information center for people who were inquiring into the Catholic Church, also a chapel of convenience for those who were shopping. So, basically we were started out as an information center, so we had a library. And, it was really if anybody came by wanting to look into what the Church stood for, or with some questions that they might have, that they were able to do something like that," he said.

It started to grow from there," Father DiGiralamo added.

Father Digiralamo said Cardinal Cushing gave the chapel an indult to perform baptisms, in case the need arose. Upon the chapel's 50th anniversary, he verified with the archdiocese that the indult was still valid.

As a result, according to Father Digiralamo the friars now "have a seal, which only parishes usually have, for official documentation" of any baptisms the Franciscans might perform, if the need arises in the future.

The chapel now hosts a gift shop in the space previously filled by the library. Purchases at Chapel of Our Savior Gift Center help support the ministry of the friars.

He said some of the details of the Catholic identity on display attract the curious.

"We wear the habit in the shop too, and that attracts people," he said.

Providing an in-depth glimpse into the Catholic faith, he said, attracts people from various traditions and faiths including Protestants, Orthodox, and even Jews.

"They just come in and they have a conversation, and we talk, and they come back," he said.

Perhaps the most well-known chapel in Boston graces one of the city's most central urban shopping locations.

Cardinal O'Malley visited the Oblates of the Virgin Mary who minister at St. Francis Chapel in the Prudential Center as they celebrated the 20th anniversary of the chapel in its current location in 2013.

The original chapel was removed during renovations to the Prudential Center begun in the late 1980s, and the new St. Francis Chapel was dedicated on April 28, 1993.

Cardinal Cushing dedicated the original St. Francis Chapel in the Prudential Center's East Tower area in 1969. In the 1980s the Oblate community took over the ministry from the Franciscans who originally staffed the chapel.

The Oblate community expanded the hours of Eucharistic adoration, and currently host adoration during the morning and afternoon hours six days a week, and for one hour in the afternoon on Sundays.

St. Francis Chapel offers 36 Masses each week, with confession and prayer space offered throughout the day. The chapel also has a bookstore which offers books and DVDs as well as a variety of religious items.

"The presence here of this chapel is an important witness to our Catholic faith in the very center of so much activity here in our city. So, it is a great blessing and I thank all of you for supporting the Oblates," Cardinal O'Malley said in his homily at the 2013 anniversary Mass.