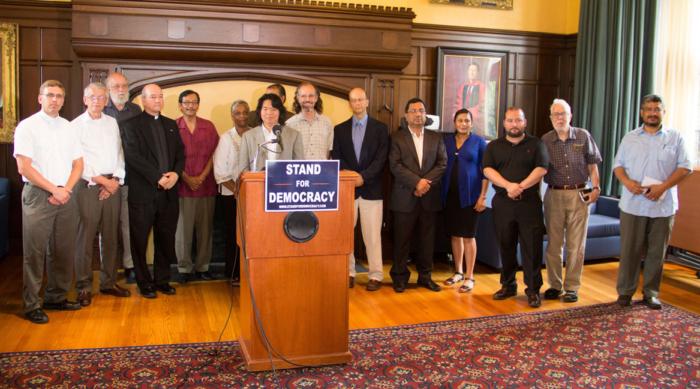 CAMBRIDGE -- Stand For Democracy, a group of Harvard students, faculty, and alumni, brought together organizers, activists, community leaders, Harvard students, and faculty with members of the state's religious communities, July 15, to advocate for the good of communities opposed to casino gambling in their neighborhoods or adjacent communities.

At a press conference organized by the Harvard grass-roots advocacy group, religious leaders and other casino opponents said they would work to support the repeal of casino gambling when the issue comes before voters in November.

Last year, anti-casino groups, including Repeal the Casino Deal, gathered over 70,000 signatures in support of a ballot measure on the issue. Attorney General Martha Coakley had refused to certify the question on the ground that, if the ballot measure was successful and casinos were outlawed, it would amount to the taking of the implied contracts between casino developers and the gaming commission without compensation.

The Supreme Judicial Court ruled June 24 to overturn the attorney general's decision, calling her rationale a "departure from common sense," and allowed the ballot question to move forward.

The law as it stands allows for up to three regional resort casinos and one slots parlor in Massachusetts. MGM Resorts International recently received a license for a proposed $800 million casino in Springfield. The state has yet to award the two remaining casino licenses, while it awarded Plainridge harness track in Plainville the slots parlor license.

Les Bernal, national director of Stop Predatory Gambling, said the United States needs to consider its identity in relation to the issue of state-sponsored gambling.

"Is this who we are as a people as a society?" he asked.

"I think anyone serious about improving the direction of country today for everyone, it runs through getting government out of the gambling business, because this has become the public waste of American government," he said.

Advocates pointed out that many casino plans target poor people in neighborhoods with a largely minority population, and said the effort in Massachusetts is particularly targeted Hispanics and Latinos.

"There isn't a public policy in America today that is more of a wealth transfer, that contributes more to financial inequality, than government sponsorship of casinos. It's nothing more than a wealth transfer from the have-nots to the haves, and that's why they target casinos in low-income communities, working-class communities across this state. They are not targeting upper-middle-class communities. They are targeting poor folks," Bernal said.

Noted theologian and Harvard Divinity School professor Harvey Cox called the casino plan a "Robinhood in reverse operation" that takes money from the poor to give to the rich.

Cox has experience advocating for the dispossessed, including experience getting arrested alongside Martin Luther King Jr. during the civil rights movement.

"I am here, in part because this is an expression of my religious commitment. I have been formed in my attitudes by a couple people, one of them is Martin Luther King, more recently Pope Francis, both of whom have emphasized that we should be on the side of the poor," Cox said.

He also pointed to recent news reports of casinos around the country that are failing and facing closure.

"Among other things, I am sad to see Massachusetts clamoring aboard a sinking ship," he said.

Cox also pointed out the amount of money spent to squash the casino opposition -- most of which was organized on a local level by faith leaders -- created a kind of David-and-Goliath scenario.

"Now watch this campaign this fall. This is going to be a very interesting and exciting campaign. We will have people all across the commonwealth, not just in faith communities, but in other communities as well, organizing to oppose the casino industry, to repeal the law which allows the casinos in Massachusetts. It will be opposed, of course, by the casino industry itself. In East Boston they outspent us $100 to one, a very asymmetrical financial picture, and yet we won," Cox said.

He attributed the victory to the participation of faith communities and faith leaders who he said formed the core of the opposition to casinos.

At the press conference, he called the leaders to stand up once again at a 1000-minister conference and rally that he announced would take place at Harvard in September.

Clergy of various faith communities who spoke at the press conference seemed prepared to answer such a call.

Father Francisco Anzoategui, director of the Hispanic Apostolate for the Archdiocese of Boston who goes by Father Paco, said he stood ready.

Don Nanstad, Pastor of Our Saviour's Lutheran Church in East Boston, said the people and the leadership of the faith communities need to be heard.

"It's going to take the voice of the people to say, this is not going to stand anymore," he said.

Imam Sherif Shabaka, Founder of the Egyptian Association, defended the democratic process in opposition to the casino supporters and companies.

"They are defying democracy, the system that I have taken an oath to protect as I became a citizen of this country," he said.

He stated his support as a religious person and as a family man.

"I will do everything I can to stop these predators from gambling away my children's future," Imam Shabaka said.