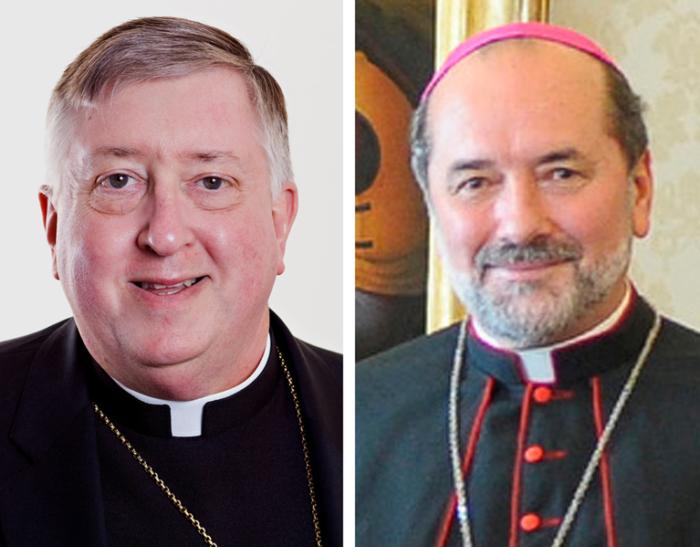 While The Pilot staff was on hiatus, Pope Francis has been busy making changes in the leadership of dioceses in the Boston province -- states of Maine, Massachusetts, New Hampshire and Vermont. If there were an "official box" for these appointments it would be as follows:

Pope Francis has accepted the resignation offered in compliance with the Code of Canon Law, can. 401.1, of Most Rev. Timothy A. McDonnell as Bishop of Springfield. The Holy Father has announced the appointment of the Most Rev. Mitchell T. Rozanski from Titular Bishop of Walla Walla and Auxiliary Bishop of the Metropolitan Church of Baltimore to Bishop of Springfield. The effective date is June 19, 2014. Bishop Rozanski will be installed in the Cathedral Church of St. Michael in Springfield on Aug. 12, 2014.

Pope Francis has accepted the resignation as Auxiliary of the Metropolitan Church of Boston offered by Most Rev. Walter J. Edyvean in accordance with the Code of Canon Law, can. 411 and 401.1. Bishop Edyvean remains Titular Bishop of Aeliae. The effective date is June 29, 2014.

Pope Francis has accepted the resignation offered in compliance with the Code of Canon Law, can. 401.1., of Most Rev. George W. Coleman as Bishop of Fall River. The Holy Father has announced the appointment of the Most. Rev. Edgar M. daCunha, SDV from Titular Bishop of Ucres and Auxiliary Bishop of the Metropolitan Church of Newark to Bishop of Fall River. The effective date is July 3, 2014. Bishop daCunha, SDV will be installed in the Cathedral Church of St. Mary of the Assumption in Fall River on Sept. 24, 2014.

The appointment of Bishop Mitchell Rozanski as the ninth bishop of the western Massachusetts diocese of Springfield brings a few firsts with it. The Maryland native will be the first bishop of the diocese of Polish ancestry; the diocese has always had a sizeable Polish Catholic population. He will be the first Marylander to serve as bishop in Massachusetts since Boston's second bishop the Jesuit Benedict Joseph Fenwick (1782-1846).

Born in Baltimore on Aug. 6, 1958 (he will also become the youngest bishop in New England), he attended Catholic elementary and high schools in the Baltimore area before studying for the priesthood at Theological College, the Sulpician Seminary at the Catholic University of America in the Nation's capital.

Archbishop William. D. Borders ordained him to the priesthood on Nov. 24, 1984. Over the next two decades he would serve in archdiocesan parishes in Baltimore, Severna Park, and Overlea; and as a vicar forane, and member of various archdiocesan consultative boards.

Pope St. John Paul II named him titular bishop of Walla Walla and auxiliary of Baltimore on July 3, 2004 and William Cardinal Keeler ordained him bishop on Aug. 24, 2004. In the years following his ordination he served as a regional bishop in the Premier See and on various committees of the United States Conference of Catholic Bishops.

The new head of the Springfield diocese is also fluent in Spanish and headed up the Hispanic apostolate of the archdiocese of Baltimore. This will be an important plus for the bishop in his new service as there is a sizeable Hispanic population in the diocese, especially in the cities of Holyoke and Springfield.

Bishop Rozanski will be installed as the ninth bishop of Springfield in the Cathedral Church of St. Michael, Springfield on Aug. 12, 2014 at 2:00 p.m.

In another first in New England, the ninth bishop of Fall River, Bishop Edgar M. daCunha, SDV, is a native of Brazil, where he was born on Aug. 21, 1953 in Riachao do Jacuipe Bahia. After his primary and secondary education in local schools, he entered the seminary of the "Vocationst Fathers" in Brazil and was sent for his theological formation to the United States, studying at Immaculate Conception Seminary of the Newark archdiocese.

Following his ordination on March 27, 1982 in Newark he served in several parishes of the archdiocese which had been entrusted to his religious community, serving then as pastor of St. Michael the Archangel Parish in Newark as its pastor. He also served in several assignments with his religious community among those were as regional representative and delegate of the superior general in the United States.

On June 27, 2003 he was named titular bishop of Ucres and auxiliary of Newark and Archbishop John J. Myers ordained him a bishop on Sept. 3, 2003. Following his episcopal ordination he served as regional bishop of Essex County (2003-2005); vicar for Evangelization (2005-2013) and most recently as vicar general of the archdiocese.

The new bishop of Fall River will be the first whose native language is Portuguese which will serve the very large Portuguese Catholic population well. The Portuguese community of the diocese resides largely, though not exclusively, in Fall River and New Bedford and is composed of natives and descendants from Portugal, the Azores, Cape Verde and more recently from Brazil. He also speaks Spanish.

Bishop daCunha will be installed in the Cathedral Church of St. Mary of the Assumption in Fall River on Sept. 24, 2014 at 2:00 p.m.