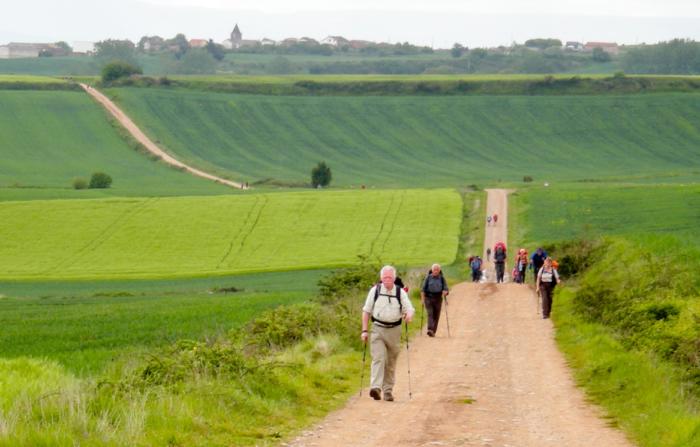 A scene from the documentary "Walking the Camino: Six Ways to Santiago" that will be coming to the Coolidge Corner Theater in Brookline June 26 until at least July 3. Pilot photo/courtesy Walking the Camino

BROOKLINE -- For centuries, pilgrims from all walks of life have traveled Camino de Santiago, The Way of St. James, across the length of Spain; but an American documentary filmmaker said she had to share what she called "the Catholic gift to the world."

The Coolidge Corner Theater in Brookline will open "Walking the Camino: Six Ways to Santiago" June 26 with a question and answer session with director and producer Lydia B. Smith. Screenings are scheduled from June 26 until July 3, and the theater confirmed that the film will continue to run as long as ticket sales sustain showings.

"What I really love about the Camino is that, really, it's open and inviting to everyone," Smith said.

El Camino de Santiago stretches along a route in northwest Spain to the shrine of the apostle St. James the Great in the Cathedral of Santiago de Compostela in Galicia, Spain -- according to tradition the final resting place of St. James.

Having walked the pilgrimage herself in 2008, Smith noted that priests at the various churches along the walk welcome diverse crowds.

"They are so welcoming, no matter what someone's background is. All that matters is that they are a pilgrim and that they are on pilgrimage. I found most of the priests along the way were so loving, and so kind," Smith said.

The film immerses viewers within the experience of a group of modern pilgrims who decide to walk the ancient path -- pilgrims who run the gamut of ages, nationalities, religious backgrounds and experiences according to the producers.

Smith said the film required more than 300 hours actually on the Camino, shooting 15 potential subjects, of which six would be featured in the documentary. Six pilgrims from very different walks of life take the journey with the audience.

Smith said making a true documentary film requires greater expense than shooting a film for placement on the web. The expenses for the film included paying the cameramen and crew -- many of whom the director said worked for about $100 a day, roughly $800 per day less than the going rate -- before volunteers and staff logged every bit of footage.

"It was a four-year process to raise the money, to prepare the edits. We had 300 hours of footage, and every single shot was logged," she said.

With all the effort, the film went from a massive amount of film to a feature-length documentary.

Smith said she worked without making any money herself during the creation of the film.

"I had raised just enough money to make the film, and then I came back and I had no money left. My editor donated her time, and we put together this 20-minute trailer. I thought I would raise money from the traditional sources, from foundations, and government organizations, and religious institutions and that didn't work. I kind of got turned down every which way," Smith said.

She had more success building support through personal connections, including people from her high school, Phillips Exeter Academy in New Hampshire.

She rented a 27-foot RV, and took the film on tour to promote it.

Getting the film from shooting in 2009 to the promotional tour that began in February 2014, required funding. The non-profit documentary raised just under $500,000 from private donors, including two grants from American Pilgrims on the Camino, a non-profit that supports communication between American pilgrims.

Funds raised at the screenings will go toward continuing the promotion of the film and the tour.

"I feel like we each get what we need to learn from the Camino, so to me, making the film was really about trying to bring the magic of the Camino to people. Whatever they get out of it is what they are meant to get out of it, just the same way as when they walk, whatever their lessons are is each individual to them," she said.