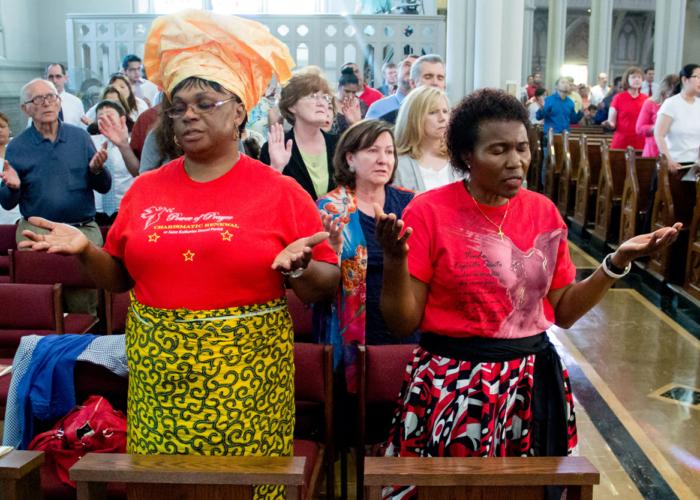 SOUTH END -- Members of the ecclesial movements and faith communities in the archdiocese gathered with Cardinal Seán P. O'Malley at the Cathedral of the Holy Cross June 7 to celebrate the Vigil of Pentecost, and to pray in solidarity with Pope Francis at a gathering in the Vatican with Holy Land leaders the next day.

"Tomorrow, this Pentecost, the Holy Father will gather with leaders from Israel and Palestine and pray for peace. Let us join with their prayer, so that the Holy Spirit will bring peace and healing to our world," Cardinal O'Malley said.

Pentecost, which falls 50 days after Easter, celebrates the day when the Apostles received the Holy Spirit and left their seclusion and began preaching the Gospel. It is sometimes referred to as the birthday of the Church.

In his homily the cardinal compared the Church created through the Holy Spirit on the first Pentecost with a family.

"So often, in families there are controversies and divisions, and dysfunction, and problems," the cardinal said.

"Pentecost brings us together, so that we can be reunified in one universal family. This universal family that embraces all races, all nationalities, and is the Church, the Catholic Church, which means the Universal Church, we celebrate today our birthday. It is, therefore, an opportune time for us to rededicate ourselves to be active and faithful members of this family of God that we call the Church," he said.

The multi-lingual readings, songs and prayers at the Mass were offered by representatives of the groups present, which included the Community of Sant' Egidio, the Charismatic Renewal Movement, Tallares de Oracion y Vida, the Neo-Catechumenal Way, the Emmanuel Community, Cursillo, Comunidade Shalom, Communion and Liberation, and the Catholic Grandparents' Association.

The Gospel reading and prayers were proclaimed in numerous languages including English, Portuguese, Spanish, Polish, Luganda and Aramaic, evoking the idea of people overcoming language and cultural barriers to worship as one through the Holy Spirit.

Like the Easter Vigil, the Pentecost Vigil has traditionally been an occasion to celebrate baptisms. During the vigil, the cardinal baptized Elena Martinez, the newborn daughter of cathedral parishioners Jesus and Greicy Martinez.

Alicia Belanger, of the Catholic Grandparents Association, told The Pilot after the Mass that passing the faith on to new generations remains an important work of unity through the Holy Spirit in the Church, while keeping prayer central in family life.

"That's the grandparents' vocation," she said.

For members of charismatic movements and groups in the Catholic Church, the feast of Pentecost holds special significance.

"We are 96 prayer groups in the Archdiocese of Boston, in all different languages. What we do in a prayer group every day is actually to renew that Pentecost that is actually coming of the Holy Spirit in the use of the charisms and the formation of the community, so our whole movement is based on the Acts of the Apostles chapter 2," said Alvaro Soares, liaison of the Charismatic Renewal in the archdiocese.

Gary Hufnagle, who represented the Cursillo movement during the Mass, also spoke with The Pilot about the birthday of the Church.

"The birthday of the Church is obviously incredibly important, but more than that, the feast of the Holy Spirit, because when the Holy Spirit can enter into your life, you can do things that you never thought you could do before," he said.

Father Antonio Medeiros, rector of the Redemptoris Mater Seminary, spoke in Cantonese during part of the Vigil Mass, a language he learned serving in the missions as a member of the Neo-Catechumenal Way.

After the Mass, he told The Pilot the work of the Holy Spirit to create unity in the Church goes beyond such things as nationality, language, or cultural divides as it penetrates individual lives.

"What is the Holy Spirit?" he asked.

He compared the Holy Spirit to a maestro in an orchestra as the answer.

"Every one of the instruments, they are supposed to play different music differently, but the beauty of the maestro, which is the Holy Spirit, is to make all of those instruments come together and give sound to a beautiful harmonious sound that speaks of the beauty, which is the person, the Church, the communion with God, and with each other," Father Medeiros said.