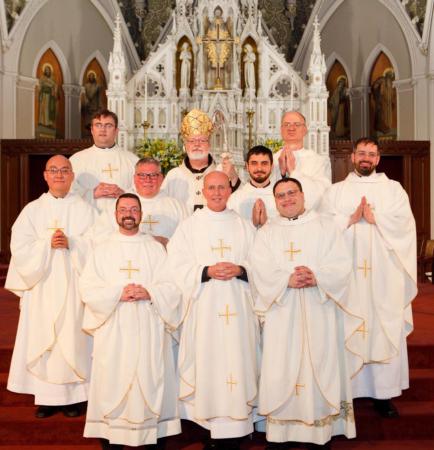 SOUTH END -- Cardinal Seán P. O'Malley ordained nine men to serve as priests of the Archdiocese of Boston at the Cathedral of the Holy Cross, May 24. The group was the largest class in recent years and included the ordination of the first Brazilian-born priest for the archdiocese.

"Today is the largest ordination class in over a decade, so I am telling people that cold winters bring bumper crops. We need more cold winters. This has been a good year, so we are very thankful to God" the cardinal said in his homily.

The cardinal thanked a nearly full house at the cathedral for their support of the men, before he celebrated the Rite of Ordination to the Order of Presbyter for Fathers Jeffrey S. Archer, Steven Clemence, Peter F. DeFazio, George E. Fitzsimmons, Kevin T. Hickey, Karlo J. Hocurscak, Mark D. Storey, Laurence M. Tocci, and Jiwon Yoon.

He called upon the men to find courage in their ministry through the example of Christ and from each other.

"We will find that courage to lead God's people, only through our prayer life and the support of priestly fraternity. Without Him, we can do nothing. Without each other, we can do little," the cardinal said.

He gave the men encouragement to serve through hard times.

"May your ministry abound with the missionary joy, born of giving your life for God's people and seeking out those who have stormed off, dozed off, or just drifted away. Put them lovingly on your shoulders and rejoice with the Good Shepherd," he said.

The cardinal conducted the ordination rite from the bishop's chair, called the cathedra, which symbolizes his apostolic teaching authority.

After the homily, each candidate approached the cathedra and promised obedience to the cardinal and his successors and lay prostrate during the singing of the Litany of the Saints.

The cardinal laid his hands upon each of the men, ordaining them priests, followed by all of the bishops and priests in attendance.

The cardinal handed each of the five new priests a paten and chalice, before they joined him at the altar to concelebrate the Mass.

Father Laurence Tocci, who graduated from Pope St. John XXIII National Seminary, shared his joy of ordination with The Pilot.

"There is a lot of hurting and a lot of confusion out there and any way that we can come out in the communities that we work with to bring people to authentic faith and a real relationship with Jesus, that's what my calling is. It's what the calling of every Christian is and I hope in my priesthood, God will point me in the direction that he wants in each particular instance to live that out," Father Tocci said.

From Korea and a convert to Catholicism, Father Jiwon Yoon said he felt graced that day by the presence of the Korean community and all those present at the cathedral.

"It's a visible sign that God, throughout the years, how He helped me. How he helped me see and then led me into the priesthood," he said.

Through a translator, his mother Elizabeth Yoon said she felt very proud of her son.

His sister said she had never envisioned her brother as a priest when they were growing up.

When she heard the news, she considered the road her brother committed to.

"I was happy, but sad at the same time, because he is going to go through a very difficult time but I am sure it is worth it," she said.

Steven Clemence became the first Brazilian priest of the Archdiocese of Boston. Fifty five of his family and friends traveled from his home town of Jundiai in Sao Paulo, Brazil to witness the occasion, including his parents Derek and Simone Clemence.

His mother, Simone Clemence, said she did not see her son develop toward the priesthood as a child, but that it came on quickly after the family entered the Church. In fact, she said, Steven's older brother, her only other child, was ordained to the priesthood almost exactly one year ago.

Father Clemence downplayed the attention he has received as the first Brazilian priest ordained for Boston.