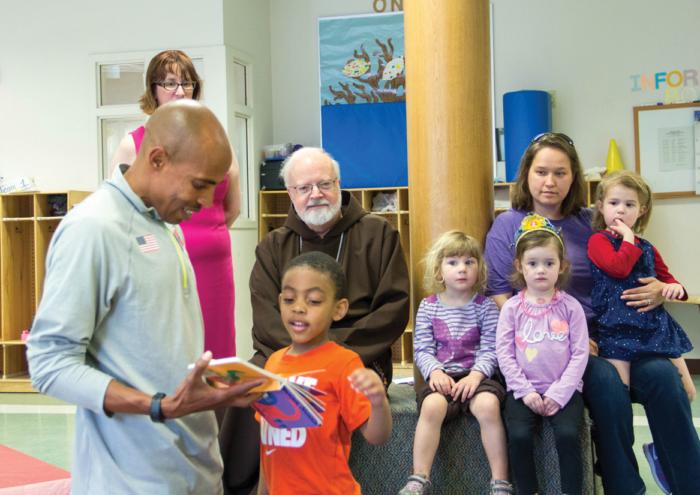 'On Thursday (5/15), I visited Catholic Charities' Laboure Center in South Boston with Meb Keflezighi, the men's winner of the 2014 Boston Marathon... After his talk we visited with the children who take part in the programs at the center. He was very good with them and the children were just precious.' Pilot photo/CardinalSeansBlog.org

On Thursday (5/15), I visited Catholic Charities' Laboure Center in South Boston with Meb Keflezighi, the men's winner of the 2014 Boston Marathon. He gave a very beautiful testimony to the staff, guests and children at the center. ...He also talked about the challenges that the family faced as they came to this country and the assistance they received from organizations like Catholic Charities. He said that although they needed assistance for a couple of years, all of his brothers and sisters went on to graduate college.

Monday night (5/19), we had one of our St. Andrews Dinners for young men discerning a vocation to the priesthood at St. Mary's Parish in Waltham. There was a very good crowd of about 50 men there. We began with Vespers in the church and then had a dinner of Chinese food in the "Upper Room" -- the second floor of the old carriage house. We had witness talks by seminarians Americo Santos and Sinisa Ubiparipovic and Father Carlos Suarez. Afterwards, I addressed the group we had a question-and-answer session.

Wednesday (5/21), we had our annual Priest Convocation at the Westin Hotel in Waltham. It is a wonderful day of priestly fraternity. Each year we like to invite a different speaker to address the men on some aspect of priestly life. This year our speaker was Bishop Christopher Coyne, who of course is a former priest of the archdiocese.

In his remarks, Bishop Coyne spoke about the changes priests face as the Church is no longer at the heart of a Judeo-Christian culture, but is now on the periphery of a secular-relativistic culture. He said we are in mission territory and explained how, in a way, we are reaching out to invite people to our faith, rather than simply trying to encourage people who are already with us in the faith.

Following Bishop Coyne's address, we had a period of questions and answers and we had a very good dialogue with the men. Following that, we heard from our Vicar General, Bishop Peter Uglietto, and I gave the closing talk. The priests always enjoy being together. It is a wonderful moment of priestly fraternity to gather before the summer.