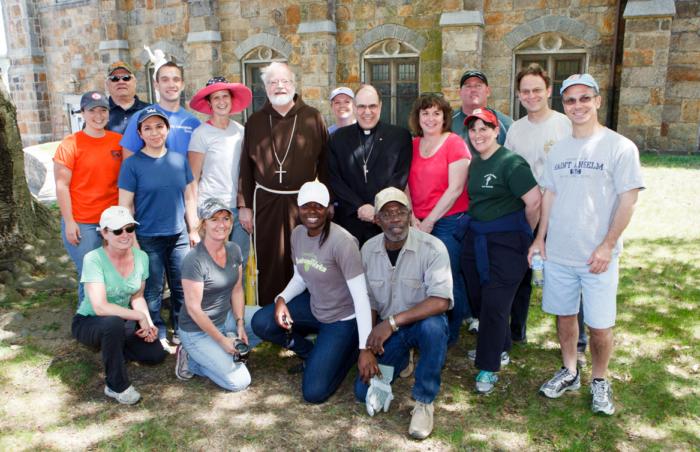 DORCHESTER -- Staff from the Pastoral Center in Braintree volunteered raking, painting and cleaning at St. Peter and Holy Family parishes in Dorchester, May 12 and 13, for the Archdiocese of Boston's Annual Service Week.

Each year the staff from the Pastoral Center volunteers to assist an inner city parish with painting, landscaping and other improvements, but Father Bryan Parrish, archdiocesan assistant vicar for administration, said the outreach accomplishes more than that.

"The primary intention, really, is to make a connection between the work that goes on here at the Pastoral Center in the various offices and ministries and the parishes that we serve -- and to make that connection real in a very concrete manner," Father Parrish said.

Father Parrish volunteered as part of the effort and said the outreach done through the annual project also helps establish interpersonal connections between the Pastoral Center staff and people in the parishes.

"First of all, those connections really do happen in a personal one-to-one manner, and then also the week is, I think, really beneficial to the Pastoral Center staff because we're able to be involved with colleagues in outreach in service work in a way that we really wouldn't be otherwise," he said.

Father Parrish described his experience developing a kind of personal rapport by working alongside colleagues in a different setting.

"I'm raking next to a couple of folks who work here, who normally I would just be communicating with by email, and that's a much different type of experience and really a much better one too," he said.

He also spoke about the service project as a tangible aspect of faith in action.

"It's not just service because it's a nice thing to do. It's service because we love God, we love the Church, we want to reach out. So you're kind of shoulder-to-shoulder with someone, doing that in a concrete way. That's a different type of relationship than a 'hi' in the hallway, or sending an email, or something along those lines," Father Parrish said.