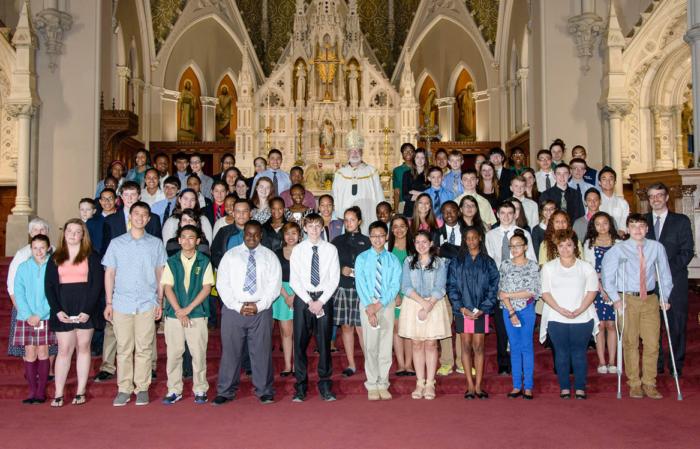 Cardinal O'Malley is pictured with the Class of 2018 Catholic Schools Foundation Scholars at the Cathedral of the Holy Cross on May 8. Courtesy photo

SOUTH END -- At a Mass and reception held at the Cathedral of the Holy Cross on May 8, Cardinal Seán P. O'Malley welcomed the Class of 2018 Catholic Schools Foundation (CSF) Scholars. The class of 2018 joins three classes of CSF Scholars, bringing the program to 660 students who will receive $1.9 million in scholarship money from the Catholic Schools Foundation in the 2014-2015 academic year.

The CSF Scholars Program was established in 2011 to provide scholarships to a select group of students in the Archdiocese of Boston's Catholic high schools. Students are chosen from each school based upon their potential as scholars, active members of their new school community, and their family's demonstrated financial need.

"These young people are the future leaders of our society and we are thrilled to be able to invest in them through a Catholic education." said, Mike Reardon, executive director of the Catholic Schools Foundation. He went on to say that, "a Catholic school education has proven to help students reach their full potential and develop the whole person. They will make a difference in this world and we look forward to seeing what their futures hold."

Following the Mass, students, their families and school representatives gathered in the gymnasium of Cathedral High School for a reception and photos with Cardinal O'Malley.